Bailey Sander and her husband Curtis, of Altoona, closed on their home within 48 hours of it being put on the market. 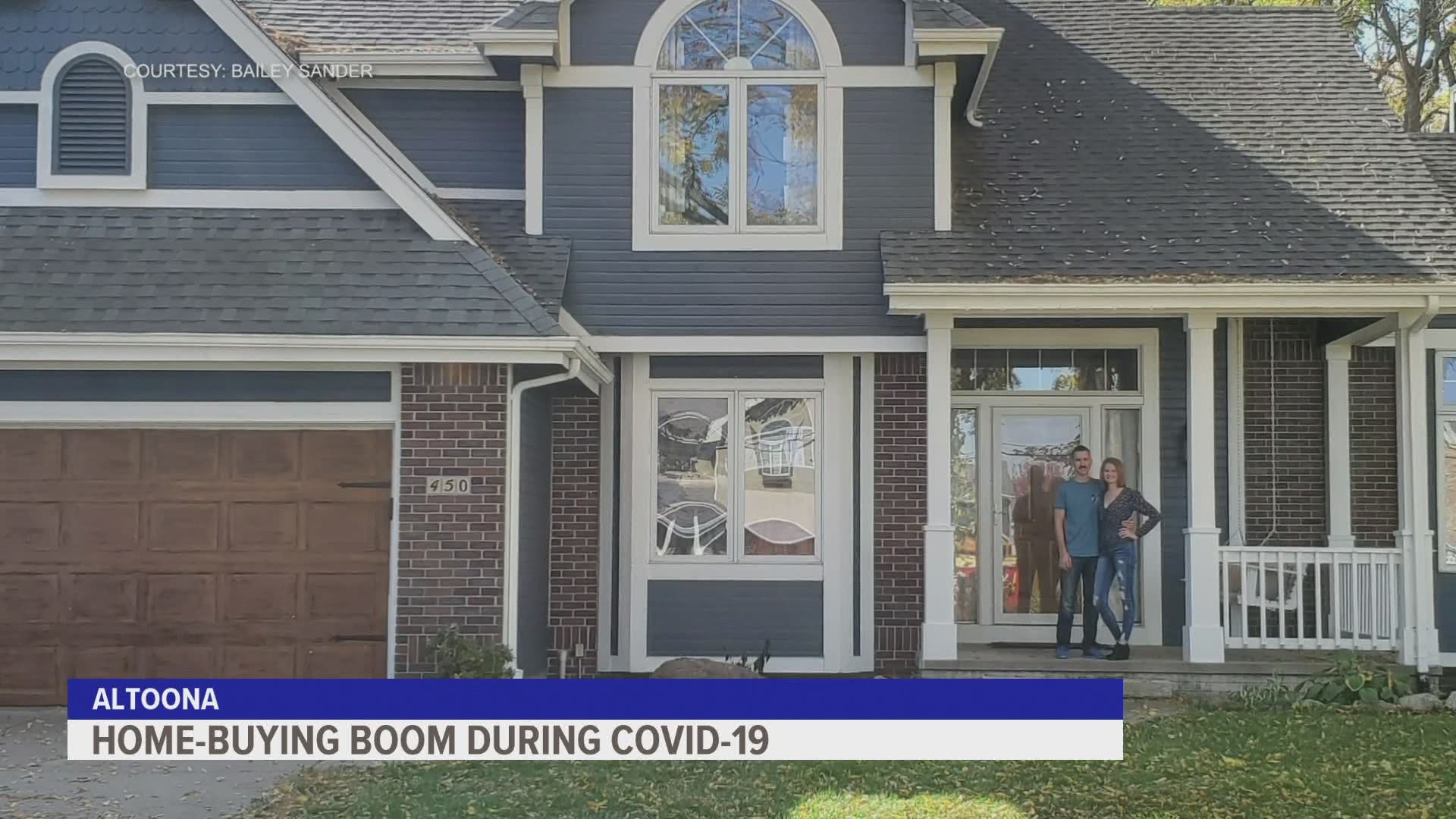 DES MOINES, Iowa — Last month, Bailey Sander doubled the size of the home she’s living in. She says it couldn’t have come at a better time.

“I was just looking for something bigger,” said Sander.

The preschool teacher from Altoona doesn’t yet have children, but she has a husband, two dogs, a cat, and a desire to eventually grow the family.

And even though she’s back in the classroom, if she needs to work from home again due to COVID-19, she wants to be equipped with the space to do so.

“I didn’t have a spot in my old house where I could like Zoom with my students,” said Sander. “I just set up shop in the middle of the living room.”

Her new home is more than 2000 square feet, as opposed to her last one, which was 890. It has a large yard, a living room, a family room, an office, and even a big tub where she can soak away all of her pandemic stresses.

"I have a soakter tub so baths have been very helpful," said Sander.

However, the home hunt wasn't easy. Bailey and her husband Kurtis started in March. They found that homes were getting snatched up as soon as they could view them.

"It was kind of nerve-racking because you didn't really have time to think about it; you are like, do you want the house, or not?" said Sander. "You can't think about it, because someone else will put in an offer on it, and it will be gone."

October home sales in the Des Moines metro area surged 34% in October, according to the Des Moines Area Association of REALTORS. President Lance Hanson says they're down 45% inventory compared to what they had this time last year.

"We are hard-pressed to get the homes out there," said Hanson. "Builders are building as fast as they can. Developers are developing, and we're hoping that land continues to come, but it's just, we have a five-year period prior to 2015 or so where development was just nothing. Everybody was scared from the last recession."

In addition, home buyers are finding it harder to get the feeling that a home is the "right fit" if they're stuck with virtual tours or limited in-person visits due to COVID-19.

"Most people buy on emotion," said Hanson. "So without that physical contact, it's hard to have that emotion."

Hanson also adds that millennials seem to be the biggest buyer group right now, having finally settled into stable jobs and relationships.

"I tink a lot of millennials found that it was kind of like two is better than one," said Hanson. "So there was a lot of that were until relationships were established, they tended to live in an apartment, or rent, or in some cases stay at home. They are better prepared to be buyers now than virtually anybody has previously."

The Sanders closed on their home on a Sunday, after it was on the market for just two days.

Bailey said the hunt was worth the pain. Now, they're prepared for whatever else the pandemic may bring.

"If we have to be locked down again, we have plenty of space."