Revelton Distilling Co. is churning out its first barrels of bourbon produced with Iowa corn grown in Clarke County. 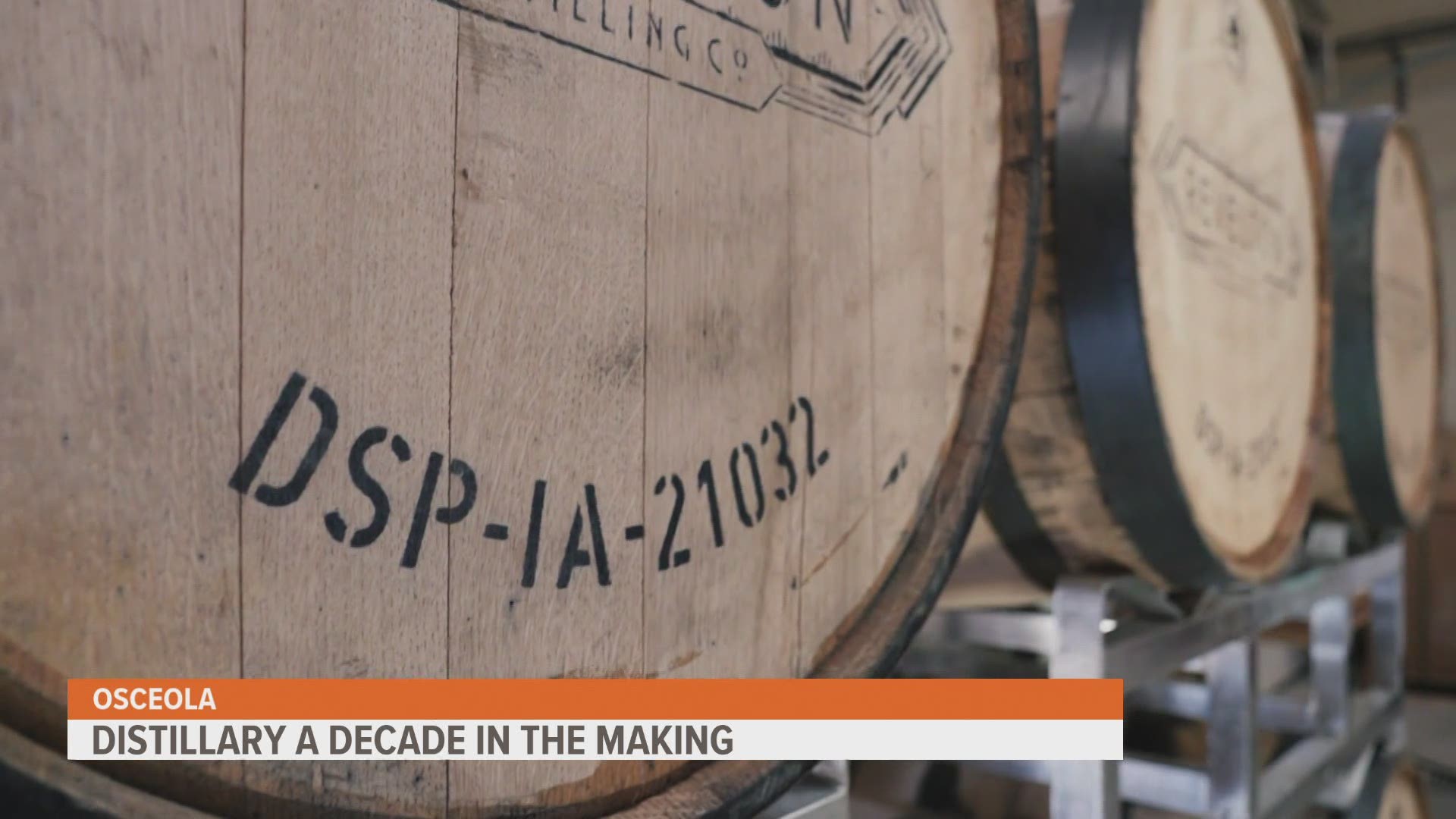 OSCEOLA, Iowa — You could say Rob Taylor has put all of his eggs into one barrel.

The former state lawmaker is putting the final touches on his multi-million dollar investment in Clarke County.

"It's almost a field of dreams,” Taylor said. “If you build it, people will come. We're located directly off I-35 in Osceola across from Lakeside Casino and less than thirty minutes from West Des Moines."

It’s a distillery with as much science and engineering involved as any you'll find in the Midwest. They’ve built an auger system to transport grain into stills while the centerpiece of the operation is hard to miss.

"We affectionately named her ‘Lucy’ because she's a redhead,” Taylor said, referring to the main whiskey still that spans the height of the production center. “All the copper is at the top of her. She's thirty-three feet tall, twenty-one plates capable of making a barrel of whiskey per hour."

The story of this former legislator turned distiller goes back 11 years, while visiting Bardstown, Ky. with his wife for the annual bourbon festival. The man behind Wild Turkey bourbon put an idea in the couple’s head with a simple question.

“He asked me, 'Do you know where we get all of our corn down in Kentucky for wild turkey?' And, I said no. He said a little company in Iowa is where they get the vast majority of their corn for Wild Turkey and he said 'Why don't you start a distillery in Iowa? I just don't understand.'"

Over a decade of planning, learning and millions of dollars invested into the operation, Revelton Distilling Co. is churning out its first barrels of bourbon produced with Iowa corn grown in Clarke County.

But don't line up for your first taste ... yet.

"By federal law they have to be at least two years and a day (old) before I can call them bourbon," Taylor said. "So i can guarantee you it's going to be at least that long."

In the meantime, they've got plenty of other products that don't take years of patience and a completely remodeled facility to try them.

"We've really only been open for seventeen weeks now and we've got six products that are really moving off grocery stores shelves and we're established in several restaurants in the metro and down here," Taylor said.

Taylor said the opportunity to tap into the millions of people who drive by every year has them patiently optimistic about the future.

"I've had a lot of different jobs in my life: everything from a farmer, to a mechanic, to a legislator and for at least the next ten years I hope to be the primary distiller and owner of Revelton Distilling Company," he said. "We intend on going big or going home."