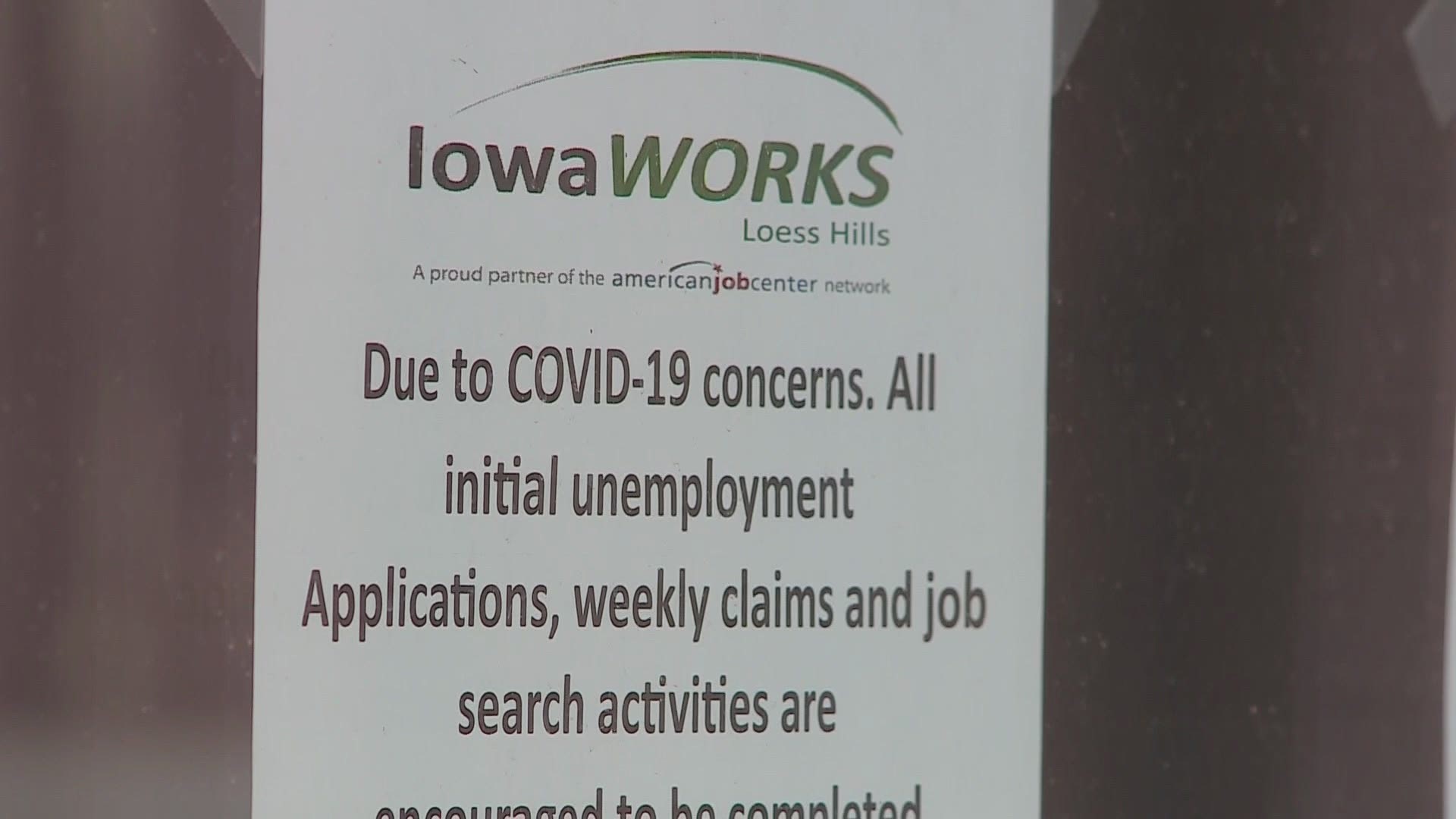 DES MOINES, Iowa — Depending on how many people collect unemployment benefits, Iowa employers may start having to pay for coronavirus-related claims.

Initially, the State of Iowa was waiving these charges to help businesses weather the worst of the pandemic.

Iowa Workforce Development Director Beth Townsend announced Thursday that the waivers will now only be temporary because the state is putting a trigger in place.

Right now, Townsend said the fund is at $1.13 billion.

How quickly could the fund fall below $950 million?

For the week of March 29-April 4, the following unemployment claims were filed:

The state paid out $27.6 million during that week.

So far this year, Iowa has paid out *$167 million in unemployment benefits. That's almost half of what the state paid for the entire year of 2018 when they paid $365 million.

Right now, employers aren't paying into the trust fund to replenish the funds going out.

*This figure excludes March 1 - March 15 because that data hasn't been published on the Iowa Workforce Development website yet.

Under normal circumstances, if an employee receives unemployment from the state, the former employer has to pay a tax on that benefit.

The rates vary based on how much money is in the Unemployment Compensation Trust Fund.

There are eight ranges of rates the state can impose. IWD calls these tax tables.

The tax rate is determined based on how much money is in the Unemployment Compensation Trust Fund.

To help businesses, the state initially planned to waive those taxes charged to employers all unemployment claims related to COVID-19

Townsend said Thursday not collecting unemployment taxes from employers once the fund dips below $950 million could lead to Iowa falling into Table 6.

That would mean higher tax rates for businesses down the road.

"The tax tables affect the baseline tax rates for employers and are, therefore, key to helping minimize the impact of this event moving forward and spurring our recovery," Townsend said.

"It's tough on all parties, but it's also the responsibility of [IWD] to make sure we monitor that," Iowa Workforce Development Deputy Director Ryan West said. "You don't want it to get so low that it comes back and just raises the taxes incredibly high on employers. It's a real delicate dance to try to make it happen."

Need to file for unemployment?

IWD said they are getting inundated with calls, so they are encouraging people to file unemployment claims online. They also have answers to FAQs and tutorial videos in the COVID-19 section of their site.

Click here for more information on how to file.

"No doubt, there are a lot of people that are calling in," West said. "We're trying to free that up for individuals who don't have internet access, English is perhaps a second language or they just have some really tough questions."

Looking for work? You can find temporary openings on IWD's website by clicking here.

RELATED: When will your federal stimulus check arrive?