Around 100 members of the central Iowa biking community, friends and family members paid their respects to Jerry Coles and Kristy Hyde. 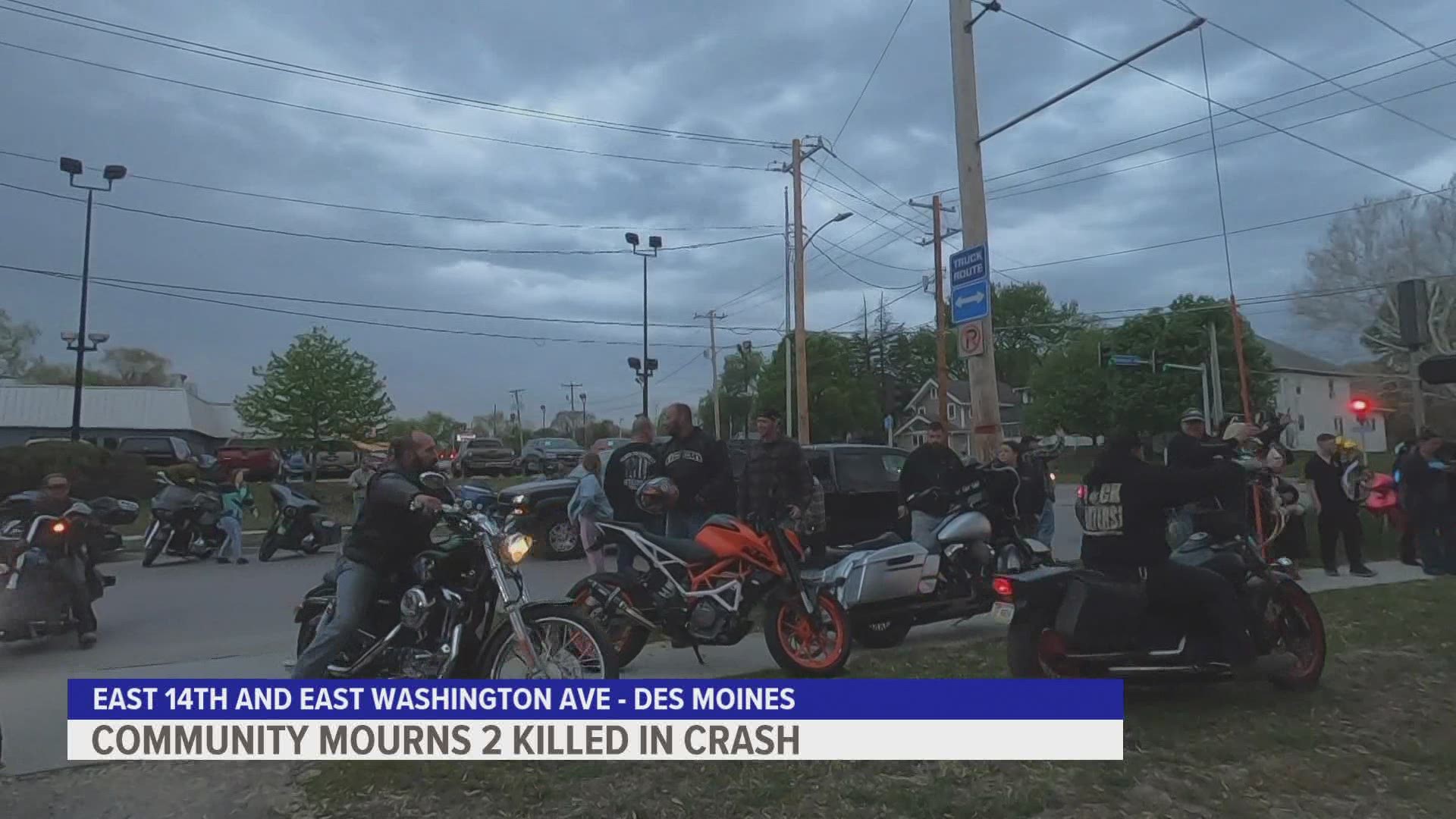 DES MOINES, Iowa — Throughout the day Wednesday, fellow motorcyclists showed up to lay flowers at a makeshift memorial. A small, white cross bearing the names of Jerry Coles and Kristy Hyde stands at the intersection of East 14th Street and East Washington Avenue in Des Moines, where the two were killed in a hit-and-run Tuesday night.

Des Moines police information officer Paul Parizek told Local 5 that none of the motorcyclists involved in the crash was wearing a helmet.

By dusk Wednesday, more than a hundred came to pay their respects. The small memorial now surrounded by candles, balloons, cards. With motorcycles revving, community members released balloons into the air, while others hugged and cried.

Huge showing of support at vigil for Jerry Coles and Kristy Hyde, two motorcyclists killed in a crash last night. The driver and passengers of the car ran away and police are still searching for them. @weareiowa5news pic.twitter.com/vATJCIcb2u

Rick Walls, a friend of Kristy Hyde, said Hyde was a florist at Boesen and made a beautiful arrangement for his wedding.

"My wedding day, she gave us all of our flowers for free," said Walls. "They were the most beautiful flowers you have ever seen in your life, orange and blue."

Walls said the family is pulling through because of the amount of love and support they're being shown, by people who know the two as well as strangers.

Moe Jafari, a motorcyclist who lives nearby, came to the intersection in the afternoon to lay flowers at the memorial.

"We are bikers," said Jafari. "We help each other, and we are like brothers and sisters."

Jafari, who heard about Tuesday's accident in the early hours of Wednesday morning, said he rode his motorcycle to the scene at around 1 a.m.

"As soon as I [saw] it, tears came out of my eyes, and I couldn't control myself," he said.

This afternoon, two motorcyclists pulled up to E 14th and Washington at a makeshift memorial to pay their respects to two victims killed in last night's crash.
"We are bikers. We help each other," said Moe Jafari. "We are like brothers and sisters."
There will be a vigil at 8. pic.twitter.com/GiYKy5xhdl