Refugee Impact: Escaping war, facing discrimination, coming to the US to make a difference

Abwe Ekumange waited 14 years to come to the United States as a refugee. Now, he wants to make a difference for others with disabilities. 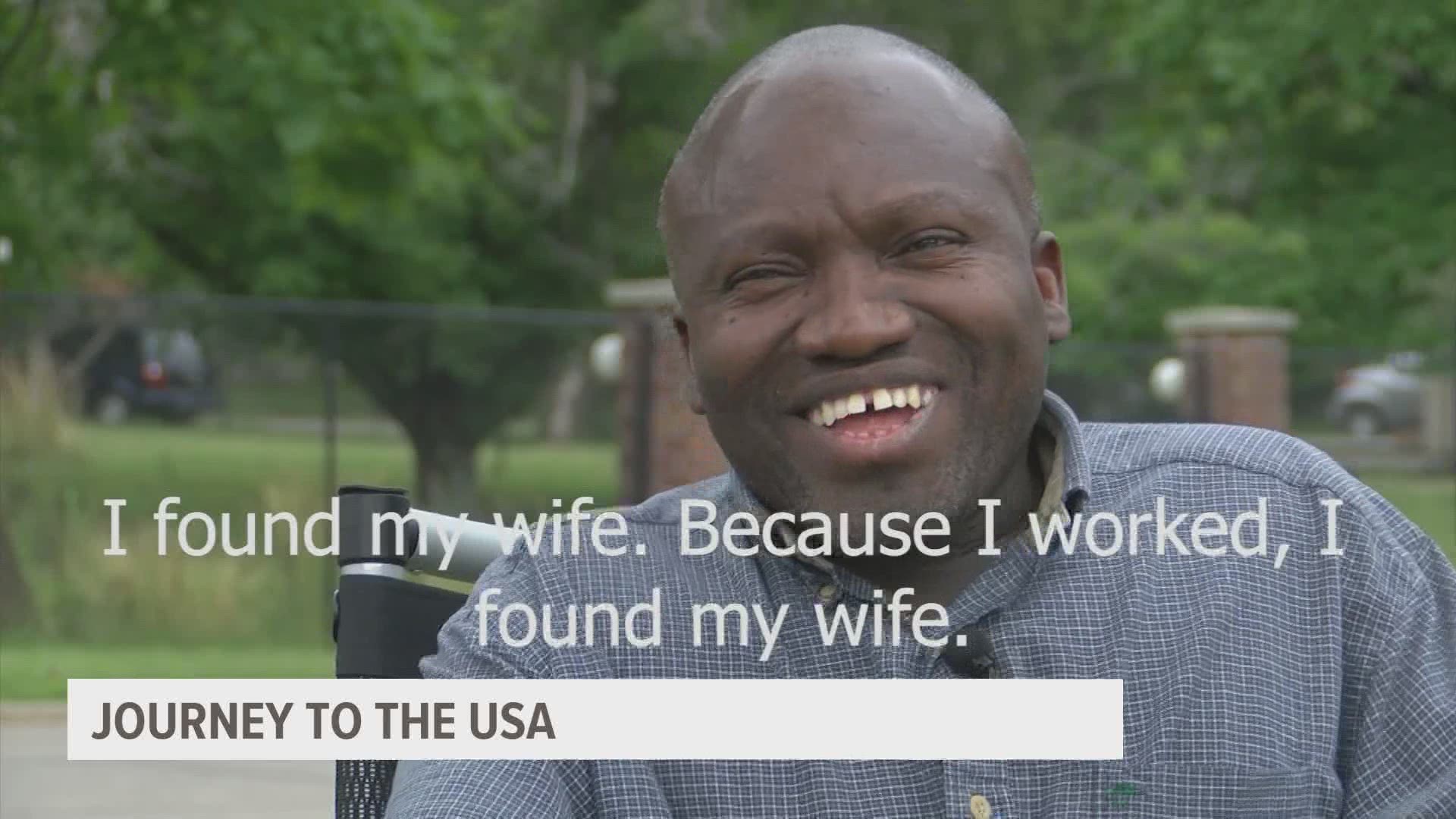 DES MOINES, Iowa — Part 2 of this series can be viewed below

Abwe Ekumange of Des Moines is no stranger to life's difficulties.

Born in the Democratic Republic of Congo, he contracted polio at a young age and became physically disabled. This made for a lonely life, since many refused to associate with him.

Many feared he was possessed or had fallen out of favor with God.

"After I got sick, I lost many things …I lost my friends," Abwe told Local 5's Jon Diaz. "I lost some of my family."

And then war broke out, forcing him to flee to Tanzania where life started to look up again.

He learned to walk, began to work and fell in love. But even that didn't come easy to him.

"At the time, they said, 'Oh, he's handicapped, you— are you crazy? You accepted to be married with someone who is like this one?'" Abwe said. "My wife is someone who loved me too much."

For much of his life, Abwe had one dream: to live in the United States.

"[The] USA has many opportunities, [the] USA can change my life."

And then 14 years later, Abwe and his family got the opportunity to resettle in the U.S.

Abwe's family made their way to Des Moines just nine months ago. He now works in manufacturing to help feed his seven kids, attends church and has his sights set on what more he can do to help others like him in his new home.

It took Abwe's family 14 years to finally make their way to the United States. He started the refugee process back in 2006 before arriving in Iowa last year.

To put it in other terms: Abwe has been trying to get to the U.S. longer than Apple's iPhone has been around.

"Refugee resettlement is a slow process. Average worldwide, a refugee is waiting for about 17 years before resettlement in the U.S., which is a long time," said Kerri True-Funk with the U.S. Committee for Refugees and Immigrants, a nonprofit that works with the federal government in part to help refugees settle into their new homes.

The process starts at the United Nations. True-Funk said the UN is the only organization that can classify a group of people as refugees.

In order to be a refugee, people need to be fleeing from their country of birth.

"Due to war, persecution, threats of violence upon yourself and your family, and be targeted because of an affiliation, a religion, a class a culture," True-Funk explained.

Once a refugee has fled to one country, like Abwe did when he fled from the Democratic Republic of Congo to Tanzania, then they can apply for entry into the next country, like the U.S.

"The process is long, and it's grueling, and it includes biometric scans, fingerprinting, physical checks, interviews with everybody from the State Department, Department of Homeland Security, up until even as they are coming to the United States, they're being screened at the airport intensively," True-Funk said.

Those individuals often arrive at their destination with little more than a few bags of clothes, so that's when nonprofits step in to ease the transition.

"To change my character to be like the Americans is very difficult," he said.

But it's worth every effort.