Niccole Begalle, mother of two, says she's not getting clear answers on whether her sons' private information was compromised. 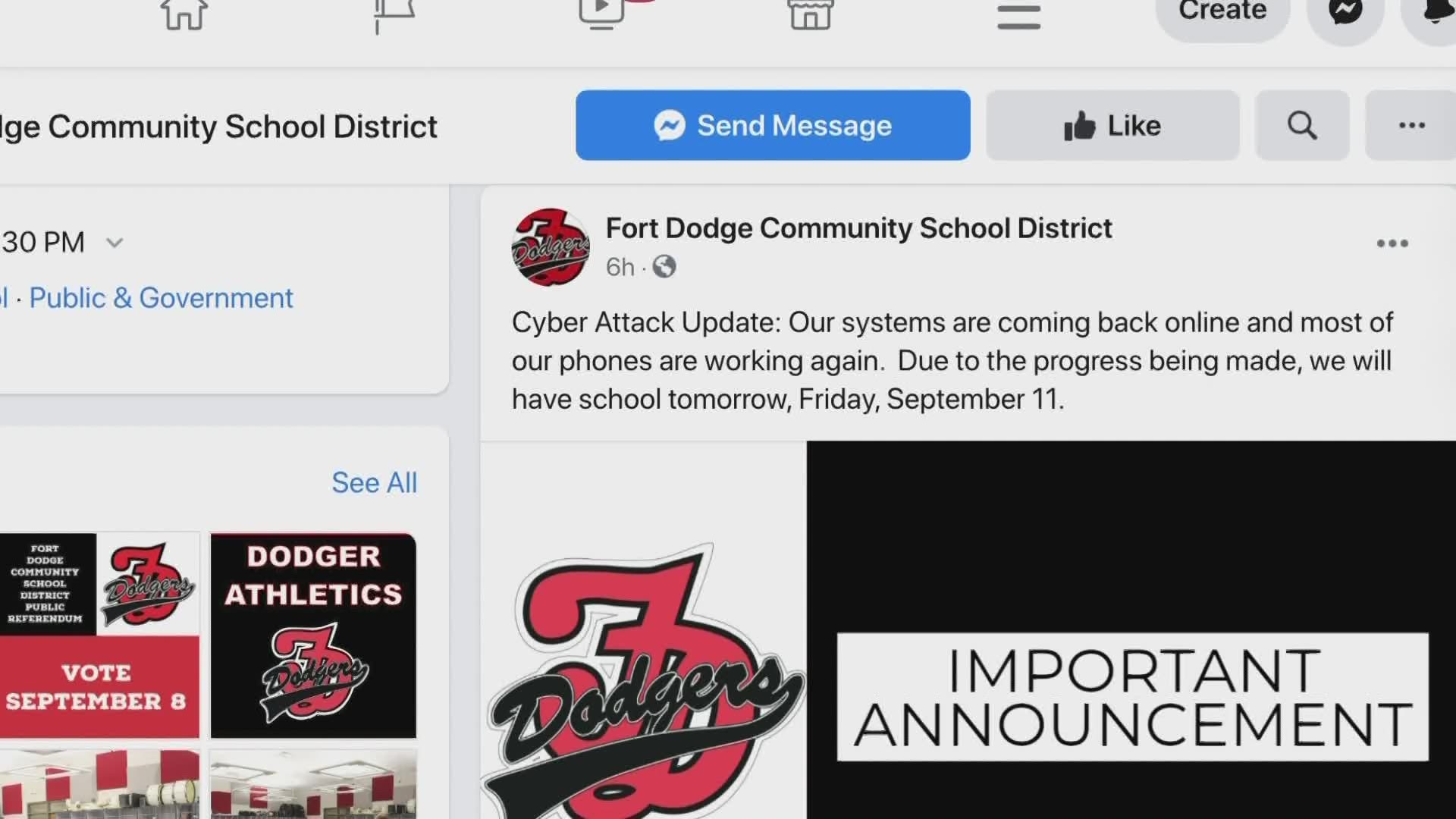 FORT DODGE, Iowa — Students and staff at the Fort Dodge Community School District will go back to class on Friday after a cyber attack shut down operations on Thursday.

However, some parents tell Local 5's they're still left with concerns.

Niccole Begalle has two school-aged sons in the district, one in 3rd grade and one in 5th grade.

She says Wednesday she received a notification on the "Remind" school communication app from one of her son's teachers. She initially thought it was a notification that the school had another COVID-19 case.

"My son just started at the middle school and they have had three cases there," said Begalle. "When the app went off, you immediately assume that somebody else tested positive. So when I saw it was a cyber attack, it was just one of those--are you kidding?"

Begalle says she then began to worry what school-based information may be compromised.

"Our bank accounts are linked to be able to pay for school lunches and supplies," said Begalle. "My kids' social security numbers, their doctors...every detail about my kids is in that computer along with my personal banking information."

Begalle noted that FDCSD has what she believes to be an excellent school board whose members have been facing a very difficult year.

"I think they've been doing a really, really good job, and I think this cyber attack came out of left field," said Begalle. "I'm sure they're kind of scratching their heads as well."

However, she says she wishes the school district would let parents know whether any of their personal information was put in the wrong hands, and if so, what measures they would need to take to rectify the situation.

The local paper in Fort Dodge, the Messenger, reported that the district's IT director said the attack was a "ransomware attack for payment".

"Now that I've heard this reporting, I'd like to know--is the school district paying this ransom? Or how are they getting our information back?" asked Begalle. "It would be nice to know who did this and what their intentions are."

FDCSD tweeted that their phone lines and internet services went down around 11:30 a.m. Wednesday. By Thursday afternoon, district officials notified parents and teachers that classes would resume on Friday.

Cyber Attack Update: Our systems are coming back online & most of our phones are working again. Due to the progress being made, we will have school tomorrow, Friday, September 11. #FDCSD #FDSH #FDMS #FDElem pic.twitter.com/2gOp7UCt8a

According to a spokeswoman for the district, access to some school systems remained unavailable on Thursday afternoon because of the cyber attack.

"We immediately implemented our response protocols and began an investigation," said the district. "Cybersecurity experts who have worked with other organizations that have had similar issues, have been engaged. We are working quickly to address the issue and to restore operations. We have notified law enforcement of the incident and will support their investigation. As part of our response to this incident, we will also look for opportunities to further enhance our existing security posture. We appreciate the patience of our Dodger families and staff as we work through this incident."

Local 5 contacted the FBI, Iowa Division of Criminal Investigation, the Fort Dodge Police Department, and the Office of the Chief Information Officer to inquire about their involvement. All agency officials informed our team they are not involved in the investigation.