The district accidentally published the denial record on their website, including the student's name who said they were raped. 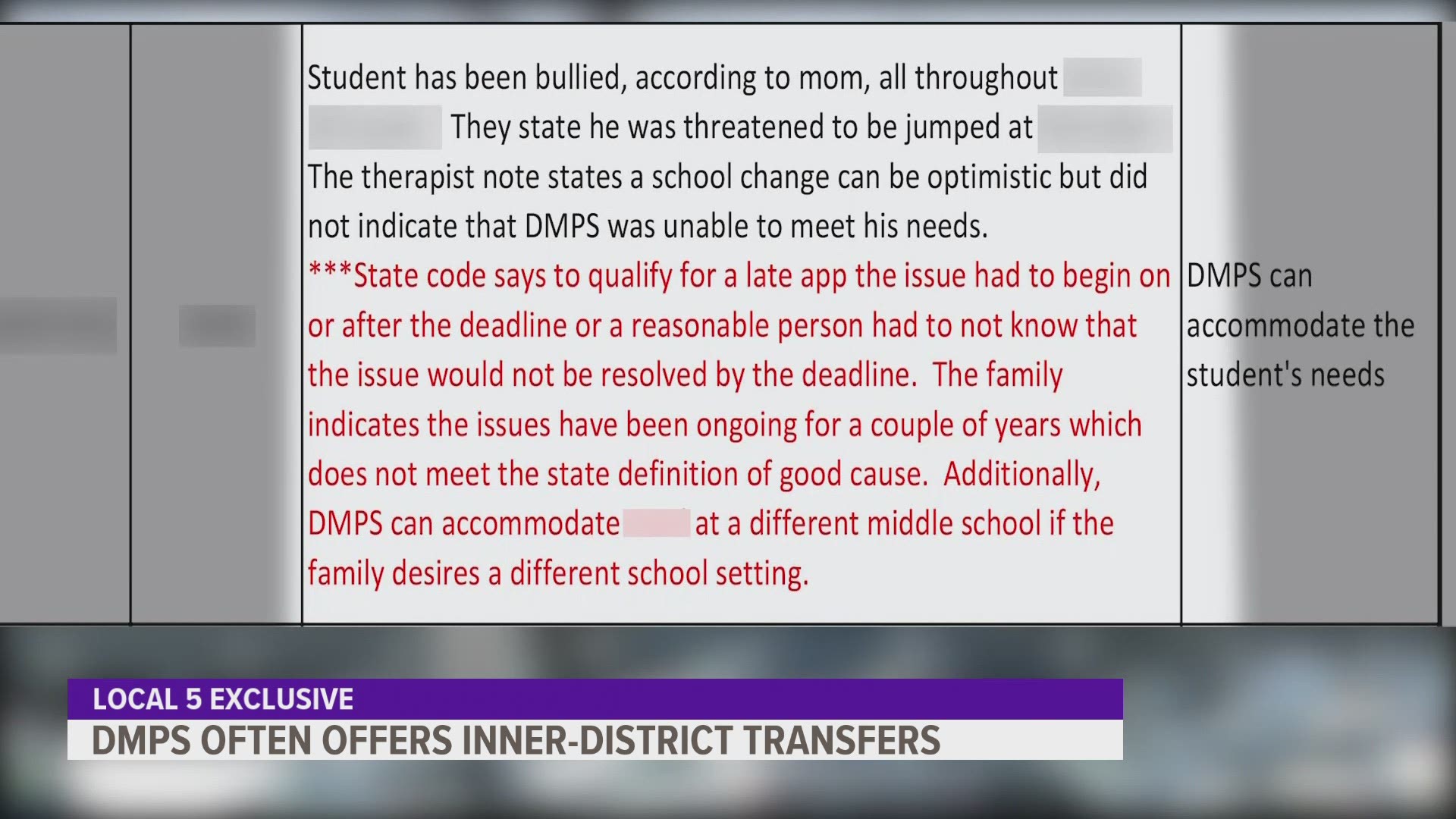 DES MOINES, Iowa — Des Moines Public Schools denied an open enrollment request from a student who was allegedly raped and being followed around school by her attacker.

The district accidentally published the denial record on their website, including the student's name who said they were raped.

“Student was raped and no longer feels safe in the school because the accused follows her around school,” one document lists as the reason the student is applying to transfer out of the district.

“DMPS is unaware of the specifics, but we can accommodate [student] at another high school if she no longer feels safe at [current school],” the document says.

This was one of 28 students identified online by the district.

All 28 applied to transfer out of DMPS, but according to the confidential documents published on the district’s website, all were denied.

Confidential documents outlining why students were requesting transfers, and why the requests weren’t granted, were on the district website for almost a year and were first reported on by Local 5’s Rachel Droze last week.

Within a half-hour of Local 5 alerting the district to the documents, they were removed.

The documents provide a glimpse into how the district makes decisions on open enrollment requests.

Local 5 redacted the documents to protect the identities of the victims, but the unedited copies were posted on the district’s website.

Almost every case that was published showed the district offered students, some of whom are alleged assault and bullying victims, the chance to transfer to another school in the district; they just weren’t allowed to leave DMPS.

That’s what happened with another student who requested to transfer after being bullied and threatened for multiple years.

The district offered to enroll the student at a different DMPS middle school but denied the request to transfer out of the district.

According to the documents, the situation didn't meet the state definition of good cause.

"State code says to qualify for a late app the issue had to begin on or after the deadline or a reasonable person had to not know that the issue would not be resolved by the deadline,” the document says. “The family indicates the issues have been ongoing for a couple of years, which does not meet the state definition of good cause.”

“As you know we are not able to discuss an individual case, but we can speak to our goal to help every student be in the best position to succeed,” DMPS spokeswoman Amanda Lewis said in the statement.

“DMPS approves three out of four open enrollment requests and has more options than any other district in Iowa for within-district transfer with five high schools, ten middle schools and 38 elementary schools,” Lewis said.

“The State of Iowa's Open Enrollment has an application deadline of March 1,” Lewis said. “Some of the request denials happen because students missed the deadline to apply. Many of those students are approved for the following year.”