Miranda Erlanson has dealt with the effects of COVID-19 since March 2020. 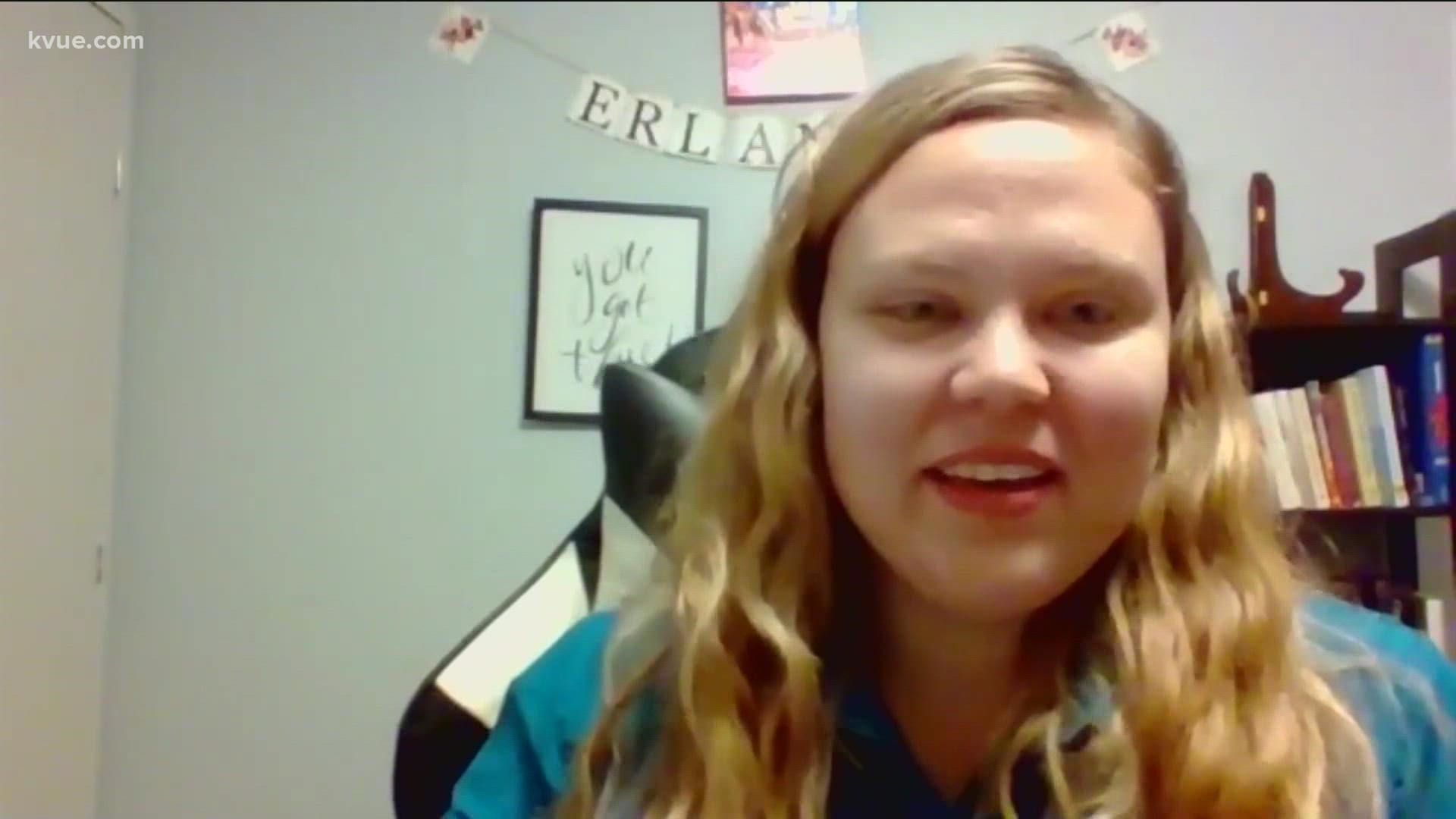 AUSTIN, Texas — At the beginning of Miranda Erlanson's resume reel, she appears in a long-sleeved teal shirt and introduces herself. The teacher is in a small white room with her last name displayed and spelled out on the back wall.

The demo video is meant to showcase that she knows how to teach a virtual class. It's uploaded on YouTube.

Erlanson hopes it's just a formality because she is fighting to get her old job with the Austin Independent School District back.

"Teaching means that I have my goal and my fire back," she said.

That fire temporarily extinguished when Erlanson was officially diagnosed with COVID-19 in August of 2020. But her symptoms actually started months before, in March.

"Pain beyond imagination, being allergic to most food, having reactions," Erlanson said.

At the time, she worked for the Bastrop Independent School District.

She moved to Austin ISD in September of last year, applied for accommodations because of her lingering effects of COVID-19 and got it.

But in April, AISD eliminated her job at the Gus Garcia Young Men's Leadership Academy due to enrollment and budget changes.

"So a lot of us were on disability leave because it wasn't safe for us for whatever the reasons. But anyway, so we lost our jobs. We had to reapply for our jobs," Erlanson said.

The district sent Erlanson a letter, acknowledging her application.

Erlanson hopes AISD allows for her cardiac pacing guideline, basically allowing her to leave a little early at the end of the day, if needed.

"I'm not asking for special treatment. I'm asking to allow me to work harder than an able-bodied person, to allow me to work even though it won't be easy, because I want to do it. And I think since that's my joy and it's what I love to do, I think it's going to help me feel better. I am vaccinated," she said.

In the meantime, a friend started a GoFundMe to help Erlanson with expenses.

Jenni Lee: What is the status of Miranda Erlanson's ADA accommodation process request?

Villa: [He could not comment on specific personnel matters.]

Lee: What was the reason her position was eliminated last year?

Villa: At the end of each school year, the district uses projected enrollment data to determine staffing allocations at campuses. If a campus is projected to be allocated fewer teachers for the coming year, board policy DK (Regulation) is applied to determine the teachers at the campus that will be placed in the priority pool for reassignment. Per the contract each teacher signs, the district has the authority to assign or reassign based on campus or district needs. Teachers in the priority pool are given priority for vacancies at other campuses for 2021-2022 and are guaranteed a position in the district should they choose to pursue it.

Lee: What was the total number of teacher jobs eliminated after a budget review the last school year?

Villa: After a review of student enrollment projections and the application of staffing formulas, we have approximately 150 fewer teacher positions in AISD; however, these positions were decreased due to retirement and resignations. No employee was eliminated due to fewer teaching positions.

Lee: What is the total number of current teacher job openings?

Villa: As of Sept. 1, 2021, we have a total of 136 posted teaching vacancies. However, we are in the process of reviewing student enrollment at this time and addressing student needs with existing teachers already employed in our district.

Lee: What is the district's policy for accommodating teachers with heart conditions?