As Iowa's 9th prison inmate dies from COVID-19, Dubuque mother worries her son could be next 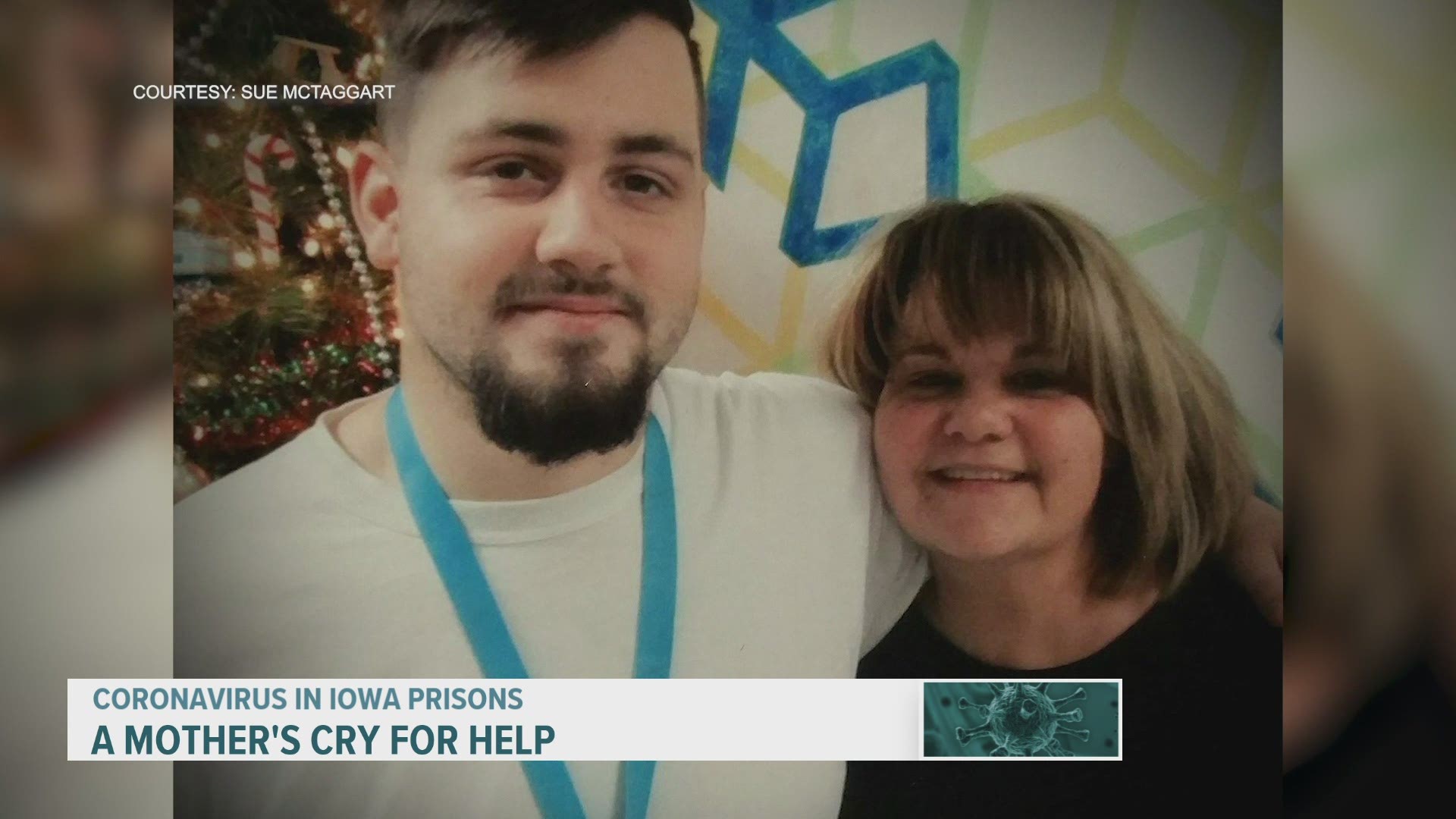 DUBUQUE, Iowa — Sue McTaggart understands that not everyone will have empathy for her people like her son, who is incarcerated.

However, she wishes more people would be alarmed about the COVID-19 outbreaks in the prison system before more prison workers and inmates are pronounced dead.

Monday, the Iowa Department of Corrections announced the ninth inmate died likely due to COVID-19 complications.

Last week, the Iowa DOC announced that the first prison worker also passed away due to COVID-19.

McTaggart's son, Danny, is serving a 10-year prison sentence for robbery at age 19.

He's six years in, currently at Mount Pleasant Correctional Facility, and won't be eligible for parole until late 2021.

Danny McTaggart, now 26, is entering his 7th year as an inmate in the Iowa Department of Corrections for robbery at age 19. Tonight, his mother worries he could be the next victim of COVID-19 in the Iowa prison system. WATCH: https://t.co/5frnd5bxjR pic.twitter.com/dxflWmlpHz

Her family tried to get Danny's sentence commuted in March, to no success.

"Our family acted right away to request through the Iowa Parole Board a commutation of sentence, and we cited prison overcrowding and COVID as our reason for making that request," said McTaggart. "We received no response."

She said her application included a letter from State Representative Lindsay James, who did receive a response regarding the application.

"The message we received secondhand from [James] was one, that they were not accellerating any consideration of parole during COVID, and the second one was that the Governor has never granted a commutation of sentence."

Local 5 reached out to the Iowa Department of Corrections last Thursday with questions regarding prison outbreaks. We are still awaiting a response.

"It feels very powerless," said McTaggart. "It definitely feels like we're not being heard."

Monday, the American Federation of State, County and Municipal Employees Council 61 held a press conference over Zoom to discuss concerns over COVID-19 affecting the health of workers and inmates in Iowa correctional facilities.

"I will work with legislators, Democrat or Republican. We have to get COVID-19 under control inside our correctional facilities," said President Danny Homan.

Homan said that he's spoken with numerous prison workers who've worked 24-hour shifts, dealing with understaffed facilities as other workers are in quarantine.

"You do need to serve your time," said Senator Taylor. "But you don't need to be subjected to a virus that's going to kill you."