Live updates: No shelter-in-place order ordered as COVID-19 cases in Iowa sits at 699 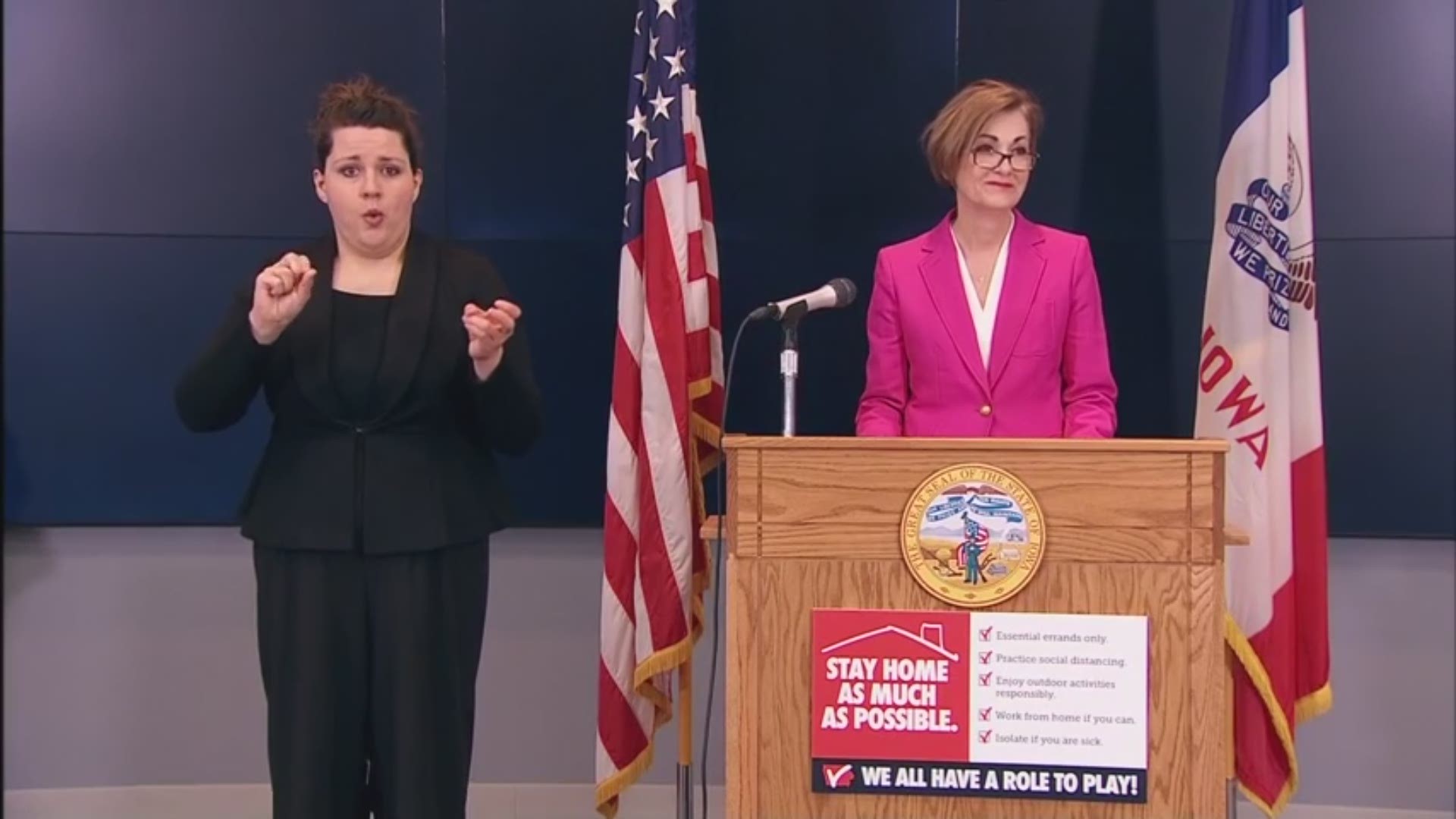 The Centers for Disease Control and Prevention recommends frequent hand washing, avoiding close contact and staying home if you are sick as main areas of focus for prevention and containment of COVID-19.

699 Iowans have tested positive for COVID-19, with negative tests totaling 8,764 as of Friday morning.

No additional deaths were reported Friday morning, leaving the state's total at 11.

RELATED: Furloughed or laid off? What's the difference?

Since mid-March, Governor Kim Reynolds has restricted several businesses in the state from operating. She prohibited in-house dining at restaurants and gatherings of 10 or more people, for instance.

Sgt. Parizek says the department has received five complaints relating to the coronavirus orders in Iowa. However, when officers investigated, they determined there were no violations.

Hy-Vee announces that new steps are being taken to further mitigate the threats of coronavirus in their stores.

The grocer says it will install temporary window panels on the back side of checkouts to help provide an additional layer of protection for both cashiers and customers.

These panels are in addition to the panels already positioned on the front side of checkouts.

Hy-Vee will also place new, one-way directional signage in its aisles that will be installed in all stores. The signage will direct customers to utilize aisles in a way that prevents them from passing each other, in an effort to maintain six feet of social distancing throughout the store.

Also, customers shopping at all store locations will be strongly encouraged to follow a “one person per cart” rule to avoid multiple family members from accompanying a customer on shopping visits.

The grocery chain is asking that customers try to designate one person per family to visit the store during each visit and to avoid shopping in large groups in an effort to limit the number of people in stores at any given time.

"This morning, the Iowa Board of Medicine held an emergency teleconference where they unanimously voted to send the governor a letter asking her to issue a shelter in place order due to the COVID-19 pandemic," Iowa Board of Medicine Executive Director Kent Nebel told Local 5 in a statement. "Their goal in doing this is to protect the public, health care providers on the front lines and maintain an adequate stock of PPE."

Iowa's total positive cases is now 699, according to the latest numbers from the Iowa Department of Public Health.

No additional deaths were reported, leaving the state's total at 11.

The U.S. Department of Transportation announced as part of the CARES Act, public transportation systems in the Des Moines area will receive $19.2 million.

“This historic $25 billion in grant funding will ensure our nation’s public transportation systems can continue to provide services to the millions of Americans who depend on them,”Transportation Secretary Elaine Chao said in a press release Thursday.

Iowa House of Representatives and Iowa Senate leadership announced that the suspension of the legislative session will be extended until at least April 30. The decision follows Governor Kim Reynolds’ recommendation that schools remain closed until April 30.

“The health and safety of all Iowans is our top priority during this unprecedented situation. Continuing the pause on session is the right decision at this time but we hope to be back soon to complete our work,” said Speaker Pat Grassley (R-New Hartford).

“I want to thank each and every Iowan for doing their part to slow the spread of COVID-19. I also want to thank Governor Reynolds for her strong leadership during this time of uncertainty. As Iowans, I have no doubt in my mind that we can get through this together.”

Leaders are working to schedule a Legislative Council meeting via teleconference to formally extend the suspension of session.

Governor Kim Reynolds announced Thursday she's recommended business and school closures through April 30. She said school districts will have to submit their plans to the Department of Education by April 10.

The governor also said districts that don't provide "continuous learning opportunities" will have to extend the school year into the summer.

Both of the fatalities were adults between 60 and 80 years old in Linn County.

A second Wells Fargo employee has tested positive for the coronavirus. The employees name has not been released but we do know that they are an employee at the West Des Moines location at 7000 Vista Dr. The employee was last in the office on March 24.

IDPH also released its guidance for implementing mitigation measures, including the state's formula in which social distancing and even a shelter-in-place would be deemed appropriate.

The Bidwell Riverside Center Food Pantry announced Thursday they saw a 31% increase in the number of people being served last month because of the COVID-19 pandemic.

The organization released a chart showing the demand.

The Des Moines Symphony announces it will be providing a series of new videos and streaming content during the COVID-19 pandemic.

Last week's totals for the entire United States was a record 6.6 million, while Iowans filing for unemployment in the week ending March 28 totaled 58,453.

Both numbers, nationally and within the state, are all-time highs.

One of the largest LGBTQ events in Iowa has been postponed due to COVID-19.

Organizers from Capital City Pride announced that Pride Week, which was scheduled for June, is now being pushed back to  July 12-19.

With recent teacher parades and 'scooping the loop' events gaining popularity, zoo officials plan to set up lighted displays around their parking lot for guests to enjoy, free of charge.

Guests are encouraged to drive around the parking lot with their car windows up on Thursday, Friday, and Saturday (April 2-4, 2020) from 8 p.m. until 10 p.m.

“We wanted to create an event that allows people to get out of the house, but stay in the car with the windows up and follow social distancing guidelines,” said Anne Shimerdla, president and COO.

There will not be a cost to see the lights, but Blank Park Zoo officials will be encouraging donations.

“Blank Park Zoo is a non-profit organization, and we rely on revenue from admissions, memberships, classes and donations to fund the operations of the Zoo,” said Shimerdla. “We are continuing our mission of excellent animal care, and your generous donations will help out greatly at this time.”

If you wish to donate to Blank Park Zoo, go to www.blankparkzoo.com/donate and www.facebook.com/blankparkzoo.

Gov. Reynolds used her press conference to remind Iowans that "we're all in this together." Director Gerd Clabaugh of the Iowa Department of Public Health took the podium to give Iowans additional resources to navigate the "new normal."

Your Life Iowa has numerous resources for anyone feeling mentally unwell during the coronavirus crisis. Online resources can be found by clicking/tapping here.

The company says the impacts of COVID-19 have caused sharp increase in people shopping online for groceries.

Amazon Prime members can now shop groceries from Whole Foods Market online at Amazon.com and schedule delivery to their home.

The online grocery delivery will include items like fresh and organic produce, bakery, dairy, meat and seafood, floral and everyday staples from Whole Foods Market.

RELATED: What you need to know about grocery shopping during the COVID-19 outbreak

The Iowa Department of Corrections says inmates at the Iowa Correctional Facility for Woman in Mitchelville has produced 2,400 gallons of hand sanitizer.

Mask and gown production is underway at the Fort Dodge Correctional Facility as well.

"We have produced 2,243 gowns so far and delivered 1,346 to the DOC institutions, 8 JD's, and tomorrow to SEOC for the State's stockpile," Cord Overton, spokesman for the Department of Corrections, said in a statement to Local 5. "We're now producing 200 per day."

“An Evening With Michael Bublé" in Des Moines postponed

Iowa Events Center announced that a May 13 concert Bublé at Wells Fargo Arena has been canceled. Individuals who bought tickets are encouraged to keep their tickets, Bublé "hopes to reschedule the concert at a later date."

The tour was scheduled to begin on May 2 in Anaheim, Calif.

10 shows has been cancelled, and the tour’s national provider, Don Fox, says the dates will be rescheduled as soon as possible.

“The safety of my fans and my touring family is more important than anything and of course takes priority," Bublé said. "I pray that everyone remains safe and I look forward to seeing you back on the road for a great night out once we are advised that our shows can continue. Stay well everyone.”