'They were never intended to be in place permanently': Reynolds defends decision to loosen COVID-19 restrictions

Masks are no longer required to be worn indoors and restaurants and bars can operate at full capacity following Reynolds' latest public health proclamation. 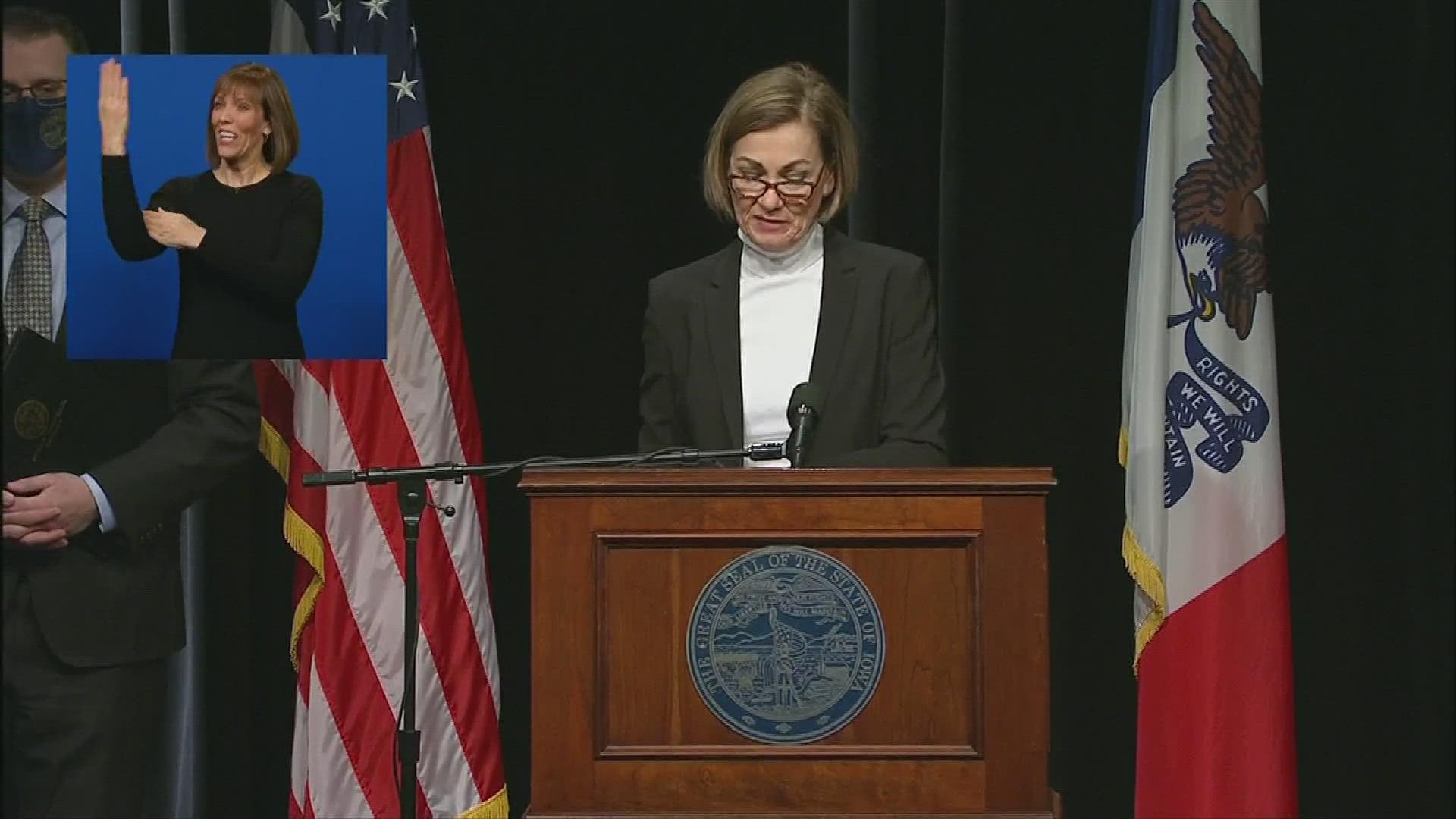 JOHNSTON, Iowa — Find out where you can find a vaccine appointment by clicking/tapping here.

"Iowans doubled down and it made all the difference," Reynolds said at her Wednesday press conference. "Over time, COVID cases dropped, hospitalizations stabilized and we began to reflect some of the extra mitigation measures."

"As I said from the beginning, they were never intended to be in place permanently," Reynolds added. "My approach has been consistent from the very beginning."

The loosening of these restrictions came days after the Iowa Department of Public Health confirmed three cases of the United Kingdom variant in the state.

'They were never intended to be in place permanently': @IAGovernor addresses her decision to lift mitigation mandates, including ending the statewide mask mandate, which many health care providers considered a dangerous move.

Reynolds pointed to the downward trend in various areas of coronavirus data as her guide for loosening restrictions, as well as additional factors.

She also listed "delayed fear" at the hospital and child and spousal abuse as being on the rise.

The governor noted the state is almost done vaccinating long-term care facility residents and staff and is working to vaccinate those 65 years and older.

"I don't think they need me to say mandated."

Last week, the governor said her team and the Iowa Department of Public Health were looking into lower than expected vaccine administration rates in some counties.

"We did this to start to identify barriers that could be slowing down vaccination efforts," Reynolds said.

She noted some counties were behind due to severe weather impacting clinics' operations.

"So the good news is those clinics have been rescheduled to this week and counties are catching up quickly."

Some counties were able to transition to Phase 1B on Feb. 1 as planned, but there are still some counties that need additional assistance from the state to administer their vaccine inventory, according to Reynolds.

"If counties don't have enough resources to administer the vaccine, we are working with them to provide contract nurses to help. And we're also looking at ways that the Iowa National Guard can support mass vaccination efforts across the state," she said. "If necessary, additional doses for some counties may be reallocated to others while they get caught up."

If counties don't have enough staffing to administer the vaccine, the state of Iowa is working with them to provide contract nurses. Reynolds also says they're looking at ways the @IaArmyNatGuard can help with mass vaccination efforts around the state.

The steps are an effort to make sure the state doesn't waste any doses of the vaccine.

As of Wednesday, nearly 350,000 doses have been administered to Iowans.

"In the past two weeks since allowing for the expansion beyond [Phase] 1A, Iowa has administered nearly 189,000 first and second doses of vaccine. And of that 189,000, more than 105,000 were administered in the last seven days," Reynolds said.

That's an average of 15,000 doses per day, a number the governor said is increasing every day. The Biden administration has announced another increase in allocation to states.

"So beginning this week, states will receive 5% more vaccine than last week, for a total of 11 million doses distributed nationwide," Reynolds said. "Our allocation will increase to 49,900 total doses, which could arrive as soon as the end of this week."

The doses could arrive as soon as Friday, Local 5 confirmed.

The Federal Retail Pharmacy Program is set to kick off this week, with 21 national pharmacy partners and independent pharmacy networks nationwide working to vaccinate Americans.

"Earlier this week, Microsoft was selected as our partner to develop and deploy a vaccine registration and appointment scheduling system, and we're now reviewing proposals for the addition of a call center to really complete the operations," the governor said. "We understand that Iowans are eager to have a centralized access point like this to make getting a vaccine as easy as possible."

Microsoft could have the program up in two weeks, according to Reynolds.