Vaccine supply is still increasing, but Gov. Kim Reynolds said the state is still not at the point where all Iowans can get their shots immediately. 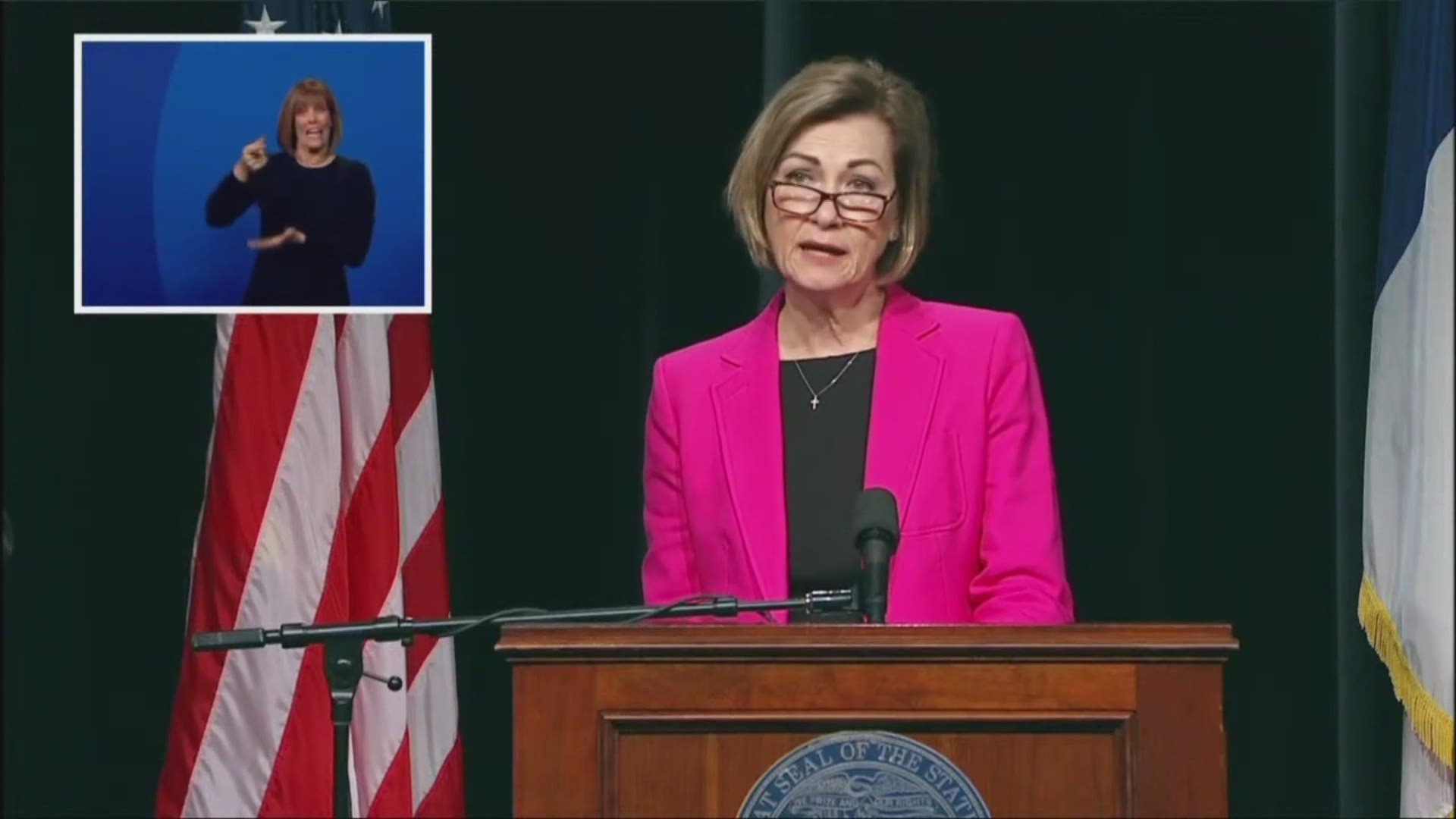 JOHNSTON, Iowa — Thanks to the increasing COVID-19 vaccine supply, Iowa will move forward with opening eligibility to all adults starting Monday, April 5.

Eligibility for the vaccine will vary county-by-county, so residents need to check in with their county health department to see if they are eligible where they live.

Vaccine supply will still be limited.

"So even though the vaccine supply is increasing, they're still at this point won't be enough doses to vaccinate everyone immediately," Gov. Kim Reynolds said Wednesday.

Essential workers are being prioritized for the single-shot Johnson & Johnson first, and once 70% of that population is vaccinated, those 18 and older can receive it.

This all comes as the Biden administration announced plans to expand its retail pharmacy program.

"The good news is that the number of participating pharmacies could be increasing by as much as 20,000 nationwide," Reynolds said. "Which will mean, again, even more vaccine locations in Iowa. While we don't know yet which pharmacies could be added in our state, we anticipate that some are already in the program."

The state will also be working with colleges, like DMACC and the University of Iowa, to get students and staff vaccinated before heading home for the summer.

"In the weeks following we'll allocate larger amounts of the J&J vaccine for this purpose, and provide a regular allocation to our local public health departments for local use as well," Reynolds said.

She assured Iowans that it won't be long before scheduling an appointment will get easier.

"So, while demand increases over the next few weeks getting an appointment, it may be challenging in some areas, but just as we've experienced when eligibility was expanded previously, it doesn't take long before appointments become more readily available."

The 2-1-1 call center will be scheduling appointments for those 16-64 with underlying health conditions who aren't able to schedule an appointment on their own.

However, the call center will not be open this Sunday due to Easter.

A mass vaccination clinic hosted by Hy-Vee and the 2-1-1 call center is scheduled for this weekend in Des Moines and will be at the Community Choice Credit Union Convention Center.

Reynolds also touched on the "slight uptick" in virus activity over the last few weeks. She said the Biden administration emphasized that states cannot forget the virus is still being transmitted amid vaccine rollout.

"And this is something that Iowa's COVID response team continues to monitor on a daily basis, even now that virus activity in our state is as low as it's been in several months," the governor said. "While we have monitored a slight uptick in positivity rate, we've not seen evidence to suggest it's leading data concerning path."

Reynolds pointed to the positivity rate being below 5% and hospitalizations being under 200.

"At this point, we have two long-term care outbreaks that account for a combined total of 16 cases," she said.

However, Local 5 found the Urbandale Healthcare Center sent out an email to families of residents Tuesday saying the facility had a total of 24 cases. The Iowa Department of Public Health told Local 5 Tuesday that they are looking into it.

Reynolds said Wednesday her administration will not mandate employees at LTC facilities get vaccinated.

"We still have a limited supply, we're opening it up. People have the opportunity to get the vaccine and we're going to continue to encourage them to do that, not going to make it a mandate. That will be a decision by private employers," the governor said.

Interim IDPH Director Kelly Garcia said the department is seeing increases in cases among those 18-29.

"A part of the increase in positive cases that we're seeing has to do with Spring Break travel, and an increasing number of variants which are circulating in Iowa, and across the nation, and they are more contagious," Garcia said. "Approximately one-third of the reported virus activity over the past week is between age group of 18 to 29."

She urged all Iowans to keep using mitigation efforts to minimize the spread of the virus and to get their shot as soon as they can.

"You don't want to be the person who spreads this virus and to those in your community. This is a community action and we need everyone to participate," Garcia said.