The state estimated 33% of crops in Iowa were damaged in the derecho Monday. 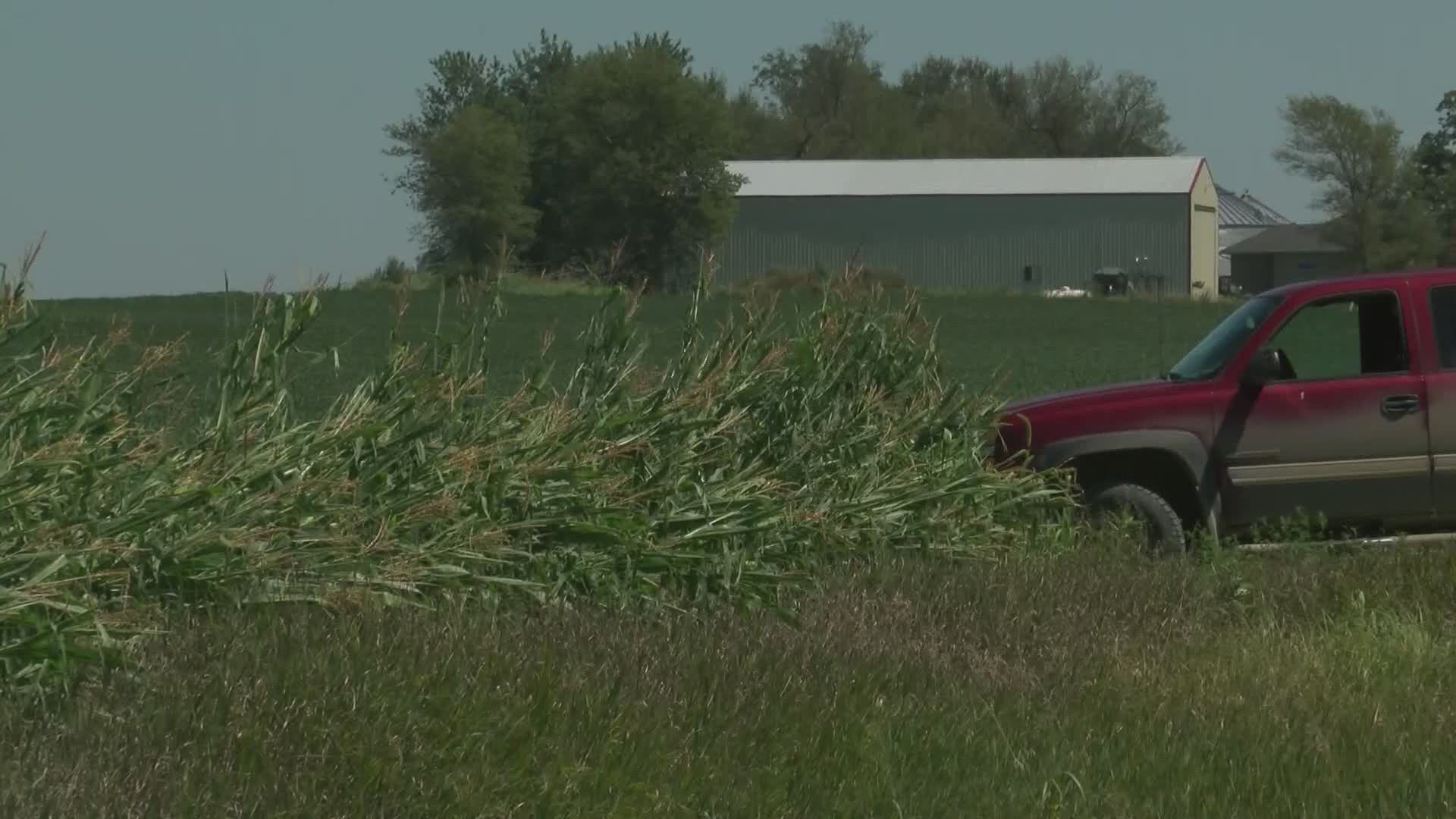 That's one-third of all crops in Iowa, according to the Iowa Department of Agriculture and Land Stewardship.

Monday morning, a powerful derecho storm ravaged the midwest. In its wake, cornfields were flattened by the hurricane-strength winds and soybean fields were damaged by hail.

As of 7 p.m. Tuesday, the governor had issued disaster proclamations for 20 counties in Iowa.

This action will allow the state to help out with the response and recovery efforts as Iowans work to pick up the pieces left behind from the storm.

"This morning, I had a farmer reach out to me to say that this was the worst wind damage to crops and farm buildings that he has ever seen across the state in such a wide area," Reynolds said during a press briefing Tuesday morning.

Tim Bardole, a farmer in Greene County, spent his day surveying damage on his 2,500-acre farm he runs with his father, brother and son.

"A local co-op last couple bins and at one time, we were kind of concerned thinking about it wondering, 'where are we going to store crop?'" Tim Bardole said. "Then we got looking and we're not too concerned. I don't think we're gonna have enough crop to fill the bins that we have."

Corn that used to stand upright on Bardole's farm is now laying on its side. Some stalks snapped off, others ripped out of the ground at the roots.

"It's been a tough couple of years to be totally honest with you," Tim Bardole said. "Sometimes it feels like one more nail in the coffin. It's at the point we're definitely just trying to survive out here. Your hope next year is going to be better. I said that last year and you know what? This is what I'm looking at now."

Only time will tell how much the storm will cost them. The crop could be permanently damaged.

Harvesting the damaged crop will be another problem.

Farmers will have to run combines in one direction to harvest the stalks laying on their sides. Bardole said if they're too close to the ground, some of the ears may be missed.

"There is going to be a lot of corn that just can't be picked up and it still will be locked in the field," Tim said.

Perspective on the estimated 10M crop acres being damaged:

According to the @IADeptAg, Iowa has 30.6 million crop acres.

That means the state is estimating 1/3 of all crops in Iowa were damaged yesterday.

It's not only farmland that got hit Monday. One Iowan lost his life.

The Linn County Sheriff's Office said 63-year-old Thomas Rowland died after being struck by one of several large trees along a bike path.

He was biking outside of Cedar Rapids near Ely, according to the Associated Press.

The AP also reported a death in Indiana.

Firefighters said they found a woman named Isabel E. Atencio, 73, under debris inside her toppled trailer. She was clutching a 5-year-old boy believed to be her grandson. He had minor injuries.

There was also property damage in Woodward, Marshalltown, Newton, Ames and more.

Reynolds said, as a result, testing numbers are down. She said, to her knowledge, no tests were damaged during the derecho.

Reynolds said the peak number of households with no power was about 550,000. 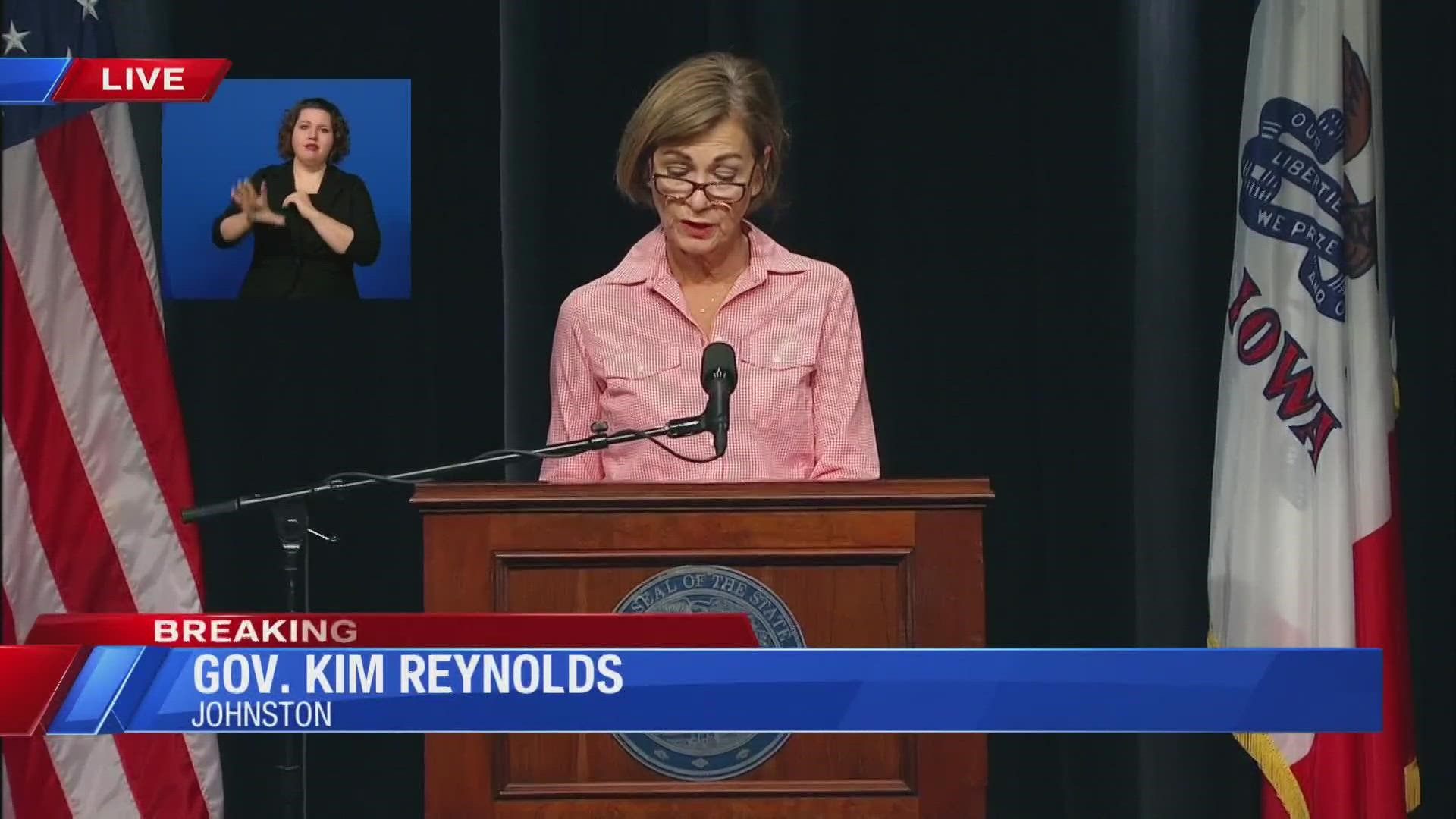 Farmers are advised to document all of their damages and report them to their local Farm Service Agency.

The Iowa Department of Homeland Security is responding to the counties that requested assistance through the disaster declaration.

Director Joyce Flinn said some counties requested the state to activate the Individual Assistance Grant Program. Low-income residents living 200% or less than the federal poverty guideline can apply for up to $5,000.

The program covers the replacement of spoiled or destroyed food, up to a maximum of $50 per person, or $25 for each additional person in the household. It can also assist families with home or car repairs and temporary housing expenses.

Grant application and instructions are available on the Iowa Department of Human Services website. Applicants have 45 days from the date of the declaration to submit a claim.

The Disaster Case Management program is also available to Iowans in the hardest-hit counties. This program "addresses serious needs to overcome a disaster-related hardship," according to a press release from the governor's office.

Disaster case managers help create a disaster recovery plan and provide guidance, advice and referrals to obtain a service or resource. There are no income eligibility requirements for the program, however, it does close 180 days following the issue of a disaster declaration.

More information on Disaster Care Management can be found by clicking/tapping here.

RELATED: A closer look: What is a derecho?