Gov. Reynolds on continued pandemic: 'There really are no days off for COVID-19'

Reynolds also touched on the state's guidance for going back to school, TestIowa and the newly-signed abortion law. 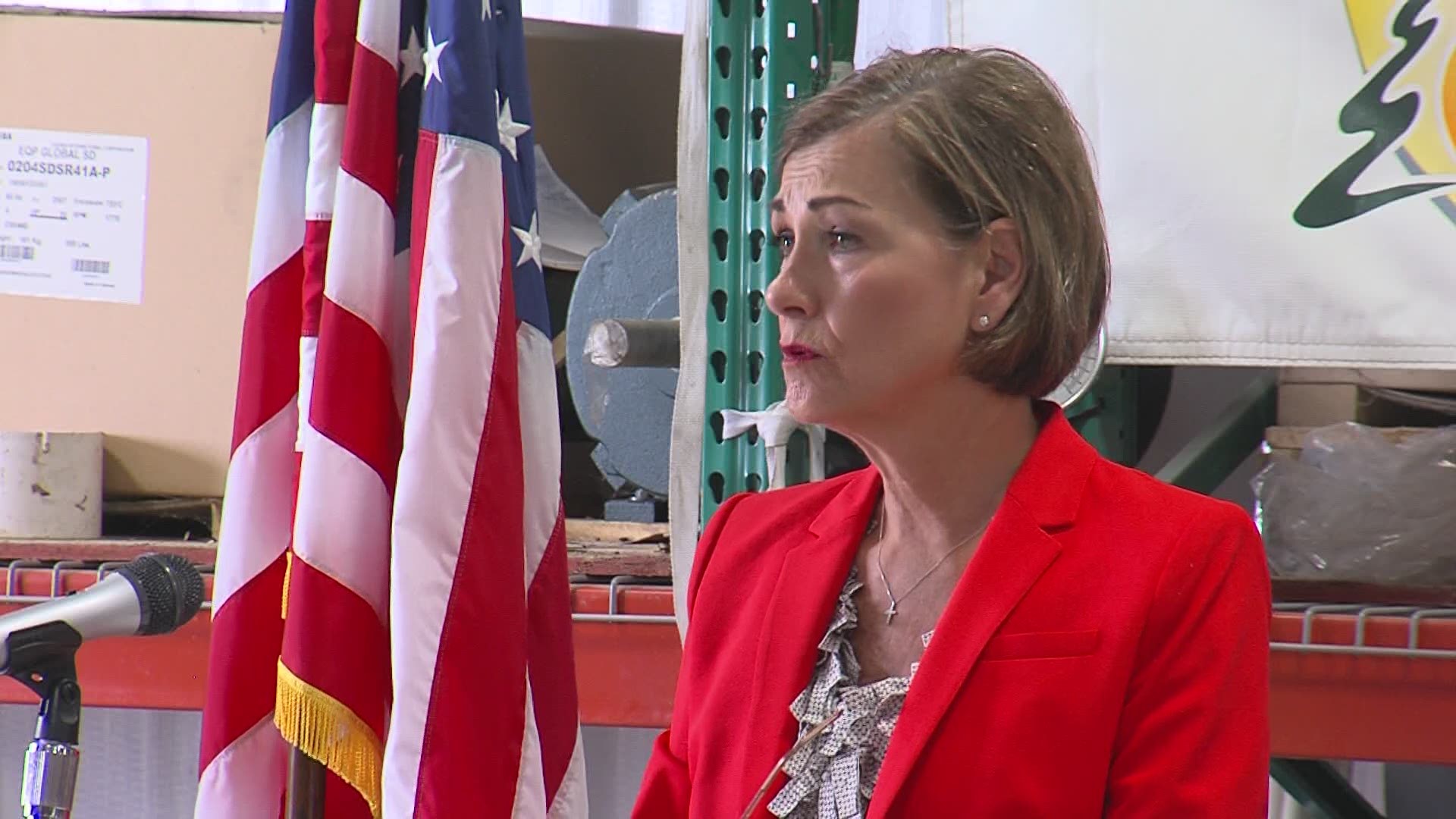 Reynolds noted that more than 300,000 Iowans have been tested for the virus, or 1-in-10. She also said that Iowa's overall positive rate continues to drop.

Tuesday's positivity rate sat at 9.5%, according to both Reynolds and the Iowa Department of Public Health's coronavirus website. The positivity rate decreased over the month of June.

Reynolds said TestIowa exceeded its daily testing capacity of 3,000 tests a day every day last week. On Monday, 3,956 Iowans were tested for the virus. Almost 80,000 Iowans have been tested through TestIowa.

TestIowa currently has 10 testing sites throughout the state, and another one will pop up in Pottawattamie County next week, according to Reynolds. 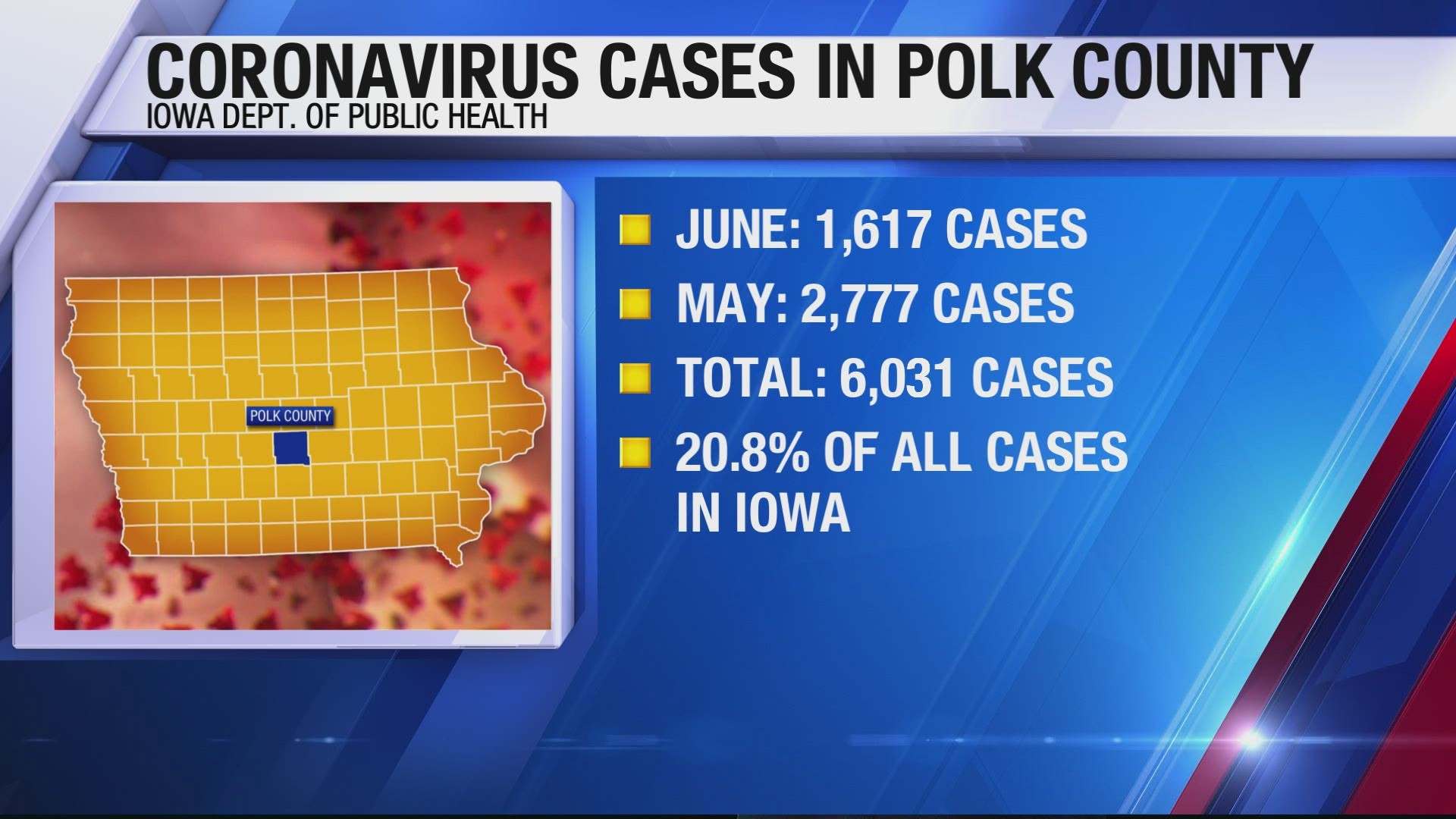 Reynolds announced another change in reporting COVID-19 data, specifically for those who've recovered from the virus.

"As you know, the State of Iowa public health officials attempt to contact every single Iowan who test positive for COVID-19, and that's how we start to contact the case investigation and contract tracing," Reynolds explained.

10 days later, the case investigation team reaches out to the individual to confirm if they have fully recovered or not. Reynolds said the issue with this is that some don't answer or return those calls.

That means that the number of recoveries didn't represent the data accurately, according to Reynolds. She included that 80% of people who contract COVID-19 are able to recover at home, often times without further medical attention.

"Yet under our current process, we only had confirmed at 62% of Iowans who had COVID-19 have recovered," she said.

Starting this week, Iowans will be considered "recovered" after 28 days following a positive test unless health officials receive information that the individual is hospitalized or that they haven't yet recovered.

The 28 days isn't a random number.

"So this time frame, it equates to two incubation periods and it aligns with our process to remove long-term care facilities from outbreak status and processes that are followed similar to what other states are doing," Reynolds explained.

This update went into effect Monday night, and skyrocketed the number of recoveries to nearly 23,000.

"We believe that this change more accurately reflects the number of Iowans recovered, and will allow our case investigation team to have more time to assist Iowans who are newly diagnosed."

Addressing the rise in cases

According to Reynolds, 60% of all new positive cases reported since June 14 were from areas near colleges and universities such as Story and Johnson counties.

Reynolds said 41% to 90% of these cases were attributed to adults between 18 and 40 years old. The governor addressed the fact that this pandemic isn't over.

"So as this week marks the Fourth of July, I'm asking Iowans to enjoy the holiday safely and responsibly, because there really are no days off for COVID-19," Reynolds said.

RELATED: 'It is very concerning' | CDC expert warns US far from containing coronavirus

Reynolds also touched on the recent spike in cases across the country. She said Iowa isn't seeing numbers like other states.

"We're not seeing happen, things happening like happening in Florida and Texas and Arizona. I'm seeing my positivity rate goes down, I'm seeing my hospitalizations go down," Reynolds said.

She also said Iowa has a better way of managing spikes in cases.

"So, we have the ability to adapt, if we need to, based on where and why, and the impact of increasing positive numbers."

Iowa schools have until Wednesday to submit their Return to Learn plans for this fall. These plans must include scenarios for on-site learning, online learning and a hybrid of the two.

Reynolds said she is confident in Iowa's schools to develop these plans to make sure that everyone is safe and healthy this fall.

"We certainly hope we don't have a resurgence or a second round, and if we do, we're in such a better place right now," Reynolds said.

The guidance released by the Iowa Dept. of Education provides flexibility for school districts to decide how they can mitigate the spread of the virus, Reynolds said.

Finally, Reynolds spoke on a bill that she signed into law on Monday that requires a 24-hour waiting period for women to get an abortion in Iowa.

"I'm gonna do everything I can to defend life. I am proud to be pro-life," Reynolds said.

Reynolds said she is going to work "vigorously" to defend the law, with help from the Attorney General's office.