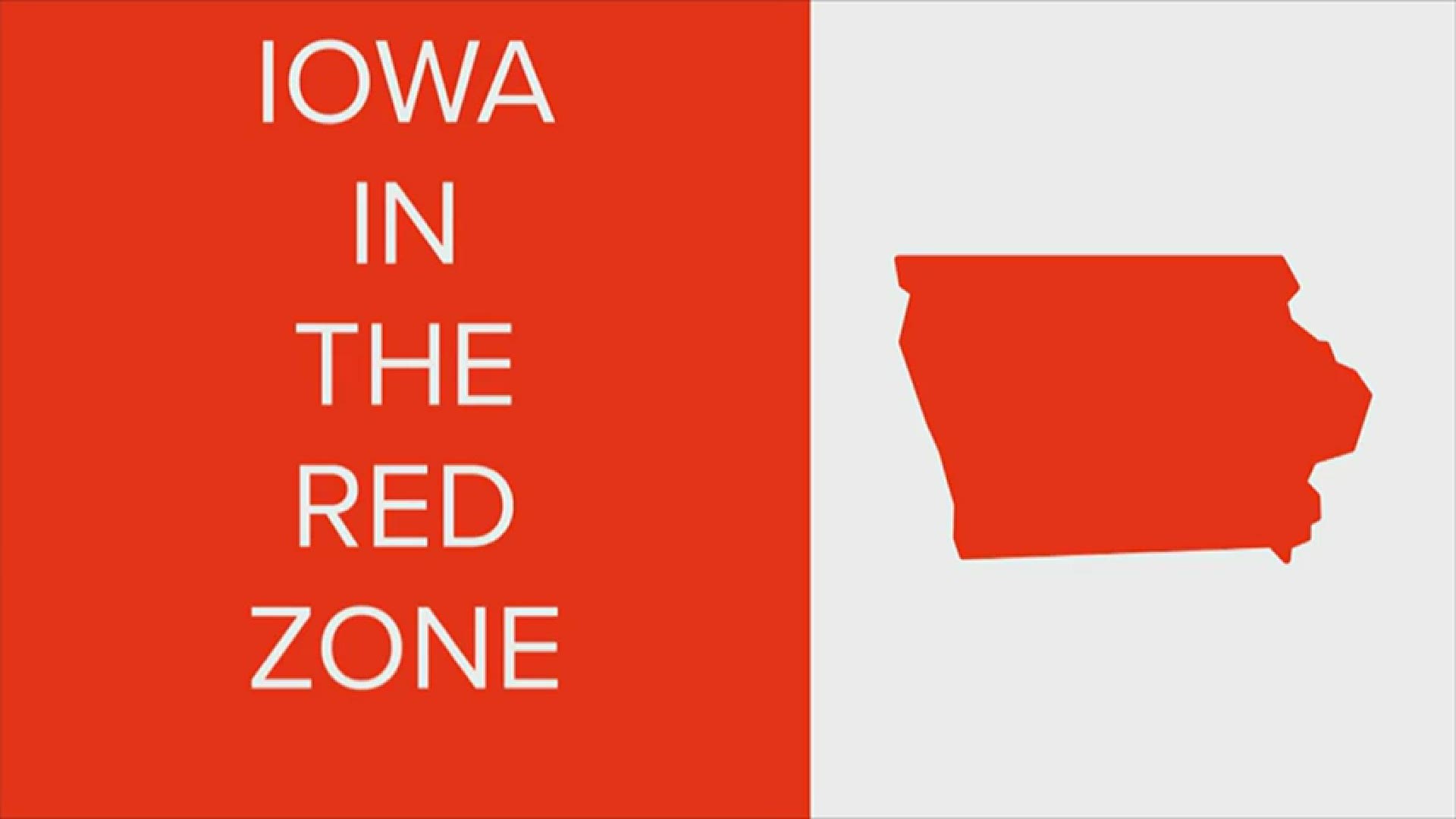 IOWA, USA — The latest White House Coronavirus Task Force report for Iowa says the state needs to strengthen mitigation efforts to effectively combat the spread of COVID-19 and deaths resulting from the virus.

The state is still in the red zone for cases, meaning 101 or more new cases per 100,000 people were confirmed during that week.

Iowa has the 8th highest rate in the country.

The state is in the orange zone for test positivity, which indicates a rate between 8-10%. Iowa has the 9th highest rate in the country.

Polk, Woodbury and Dubuque counties had the highest number of new cases over the last three weeks, according to the report. Combined, these counties represent 22.6% of new cases in Iowa.

The report says 4% of nursing homes reported at least one death among residents.

As of Wednesday morning, the Iowa Department of Public Health's (IDPH) coronavirus website says 68 long-term care facilities are experiencing an outbreak with more than 1,700 confirmed cases among staff and residents.

Hospitalizations continue to increase in the state.

Wednesday morning, IDPH reported the highest number of Iowans hospitalized from the virus: 534.

Iowa has set the state record of hospitalizations eight times in October:

An average greater than 95% of hospitals reported either new confirmed or new suspected coronavirus patients each day during this time, according to the task force.

RELATED: 'We have the right to peacefully gather:' Gov. Reynolds supports Trump's rally that attracted thousands

Red and orange counties should limit the number of people at both public and private gatherings, limiting exposure to only immediate family.

According to the World Health Organization, a sentinel surveillance system is used when high-quality data is needed about a particular disease that cannot be obtained through a passive system.

The task force report says weekly surveillance data will help with identifying emerging hotspots where "immediate action should be taken to stop the spread within communities."

All antigen tests must be reported within the state totals, including total tests and positive tests. Iowa is on track for doing this already.

With 26% of nursing homes reporting at least one staff positive, the task force recommends the state work with these facilities to contact trace to decrease the introduction of community transmission to nursing homes.

The task force recommends highlighting the number of hospitalizations to rural communities so residents can do their part to help slow the spread.

University students should continue their own mitigation practices to ensure no further outbreaks on or off campus as surveillance testing declines.

The task force recommends the state encourage the use of retailers that enforce mask wearing and social distancing, and that they should also send specific messaging to those 65 years and older through senior citizen networks.

Another recommendation is ensuring hospitals have access to antivirals and antibodies to use for treatment.

They also recommend aggressive support in testing for Tribal Nations as well as isolation and health care delivery systems "within appropriate cultural context."