The latest report obtained by ABC News says Iowa needs to up its mitigation efforts to reduce community spread in the state. 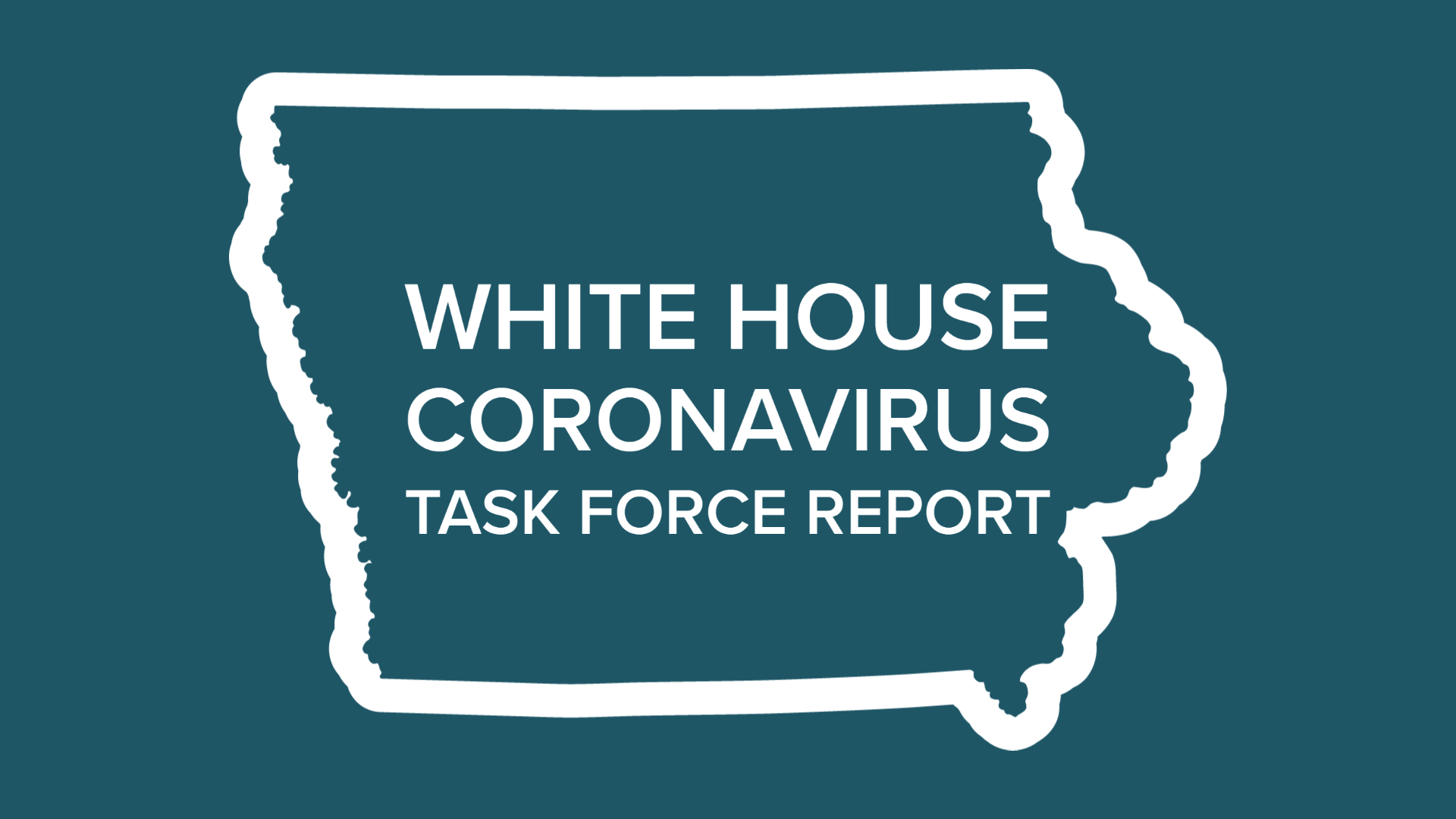 DES MOINES, Iowa — The White House Coronavirus Task Force continues to stress the need for further COVID-19 mitigation efforts in Iowa as the number of cases and hospitalizations continues to increase in the state.

Gov. Kim Reynolds and other state health officials haven't held a press conference to answer questions on the pandemic since Oct. 7.

The Iowa Department of Public Health's coronavirus website reports 596 Iowans are hospitalized from the virus, the highest number of Iowans hospitalized.

It beats Tuesday's record by 32.

The White House report brings more context to these data points in its summary.

The task force says Iowa is in the red zone for new cases and has the 10th highest rate in the country. That means more than 101 new cases per 100,000 people were confirmed from Oct. 17 to 23.

Iowa is also in the red zone for test positivity, indicating a rate of 10.1% or higher. The state has the 11th highest rate in the country, according to the report.

Only four counties reported less than 20 cases in the last two weeks: Adams, Franklin, Wayne and Worth.

Over the last three weeks, Polk, Dubuque and Woodbury counties saw the highest number of new cases. These counties represent 21.9% of new cases in the state.

Credit: WOI
Data from the Iowa Department of Public Health detailing new cases in Iowa from October 13 through 23. Data as of Oct. 28 at 12:43 p.m.

Credit: WOI
Data from the Iowa Department of Public Health detailing deaths per day from October 13 through 23. Data as of 12:43 p.m. on Oct. 28.

Long-term care facility outbreaks sit at 71 as of Wednesday morning. More than 2,000 staff and residents have tested positive at these facilities. A total of 828 Iowans linked to these facilities have died from the virus.

All eyes are on Iowa's hospitals as more and more are admitted due to the virus. The White House reports an average of 84 patients with confirmed COVID-19 were hospitalized per day from Oct. 17 to 23.

As for suspected COVID-19 patients, an average of 26 Iowans were admitted each day during the same time frame.

"An average of greater than 95% of hospitals reported either new confirmed or new suspected COVID patients each day during this period," the report says.

Credit: WOI
Data from the Iowa Department of Public Health shows the steady increase in hospitalizations from Oct. 13 through 23. Data as of 12:40 p.m. on Oct. 28.

The task force says all indicators of community spread are increasing across the state, including the percent of nursing homes with positive staff and residents as well as increasing hospitalizations.

The increase of cases could lead to potential resource constraints.

Gov. Reynolds has continuously said she will not enforce a mask mandate in Iowa, placing her trust in Iowans.

RELATED: 'I have to balance a lot': Reynolds' trust in Iowans questioned as hospitalizations spike

The task force says they are finding that as the weather cools, friends and families may move indoors for social gatherings. which can significantly increase the spread of the virus if those individuals aren't utilizing mitigation efforts.

"Work with communities to limit large and small social gatherings; current transmissions are linked to home gatherings," the report states. "People must remember that seemingly uninfected family members and friends may be infected but asymptomatic. When meeting people who are not a part of one’s household, masking and physical distancing must be observed at all times, especially when indoors."

Since more than 30% of nursing homes saw new staff cases within the last week, the task force recommends tracing exposures to decrease the introduction of community spread in these facilities.

The state should also ensure testing and hospital supplies are available to Tribal Nations.

The state is encouraged to review transmissions in Polk, Dubuque and Linn counties to trace the source of spread with specific messages to these areas.

The task force recommends creating specific messaging that will appeal to the following groups to engage them to do their part to slow the spread:

The state should also make sure Tribal Nations are addressing COVID-19 fatigue and work on practices that are "culturally supportive" for the fall.