Less than five percent of patients given the treatment at MercyOne Des Moines have ended up hospitalized, according to Dr. Casey Rice. 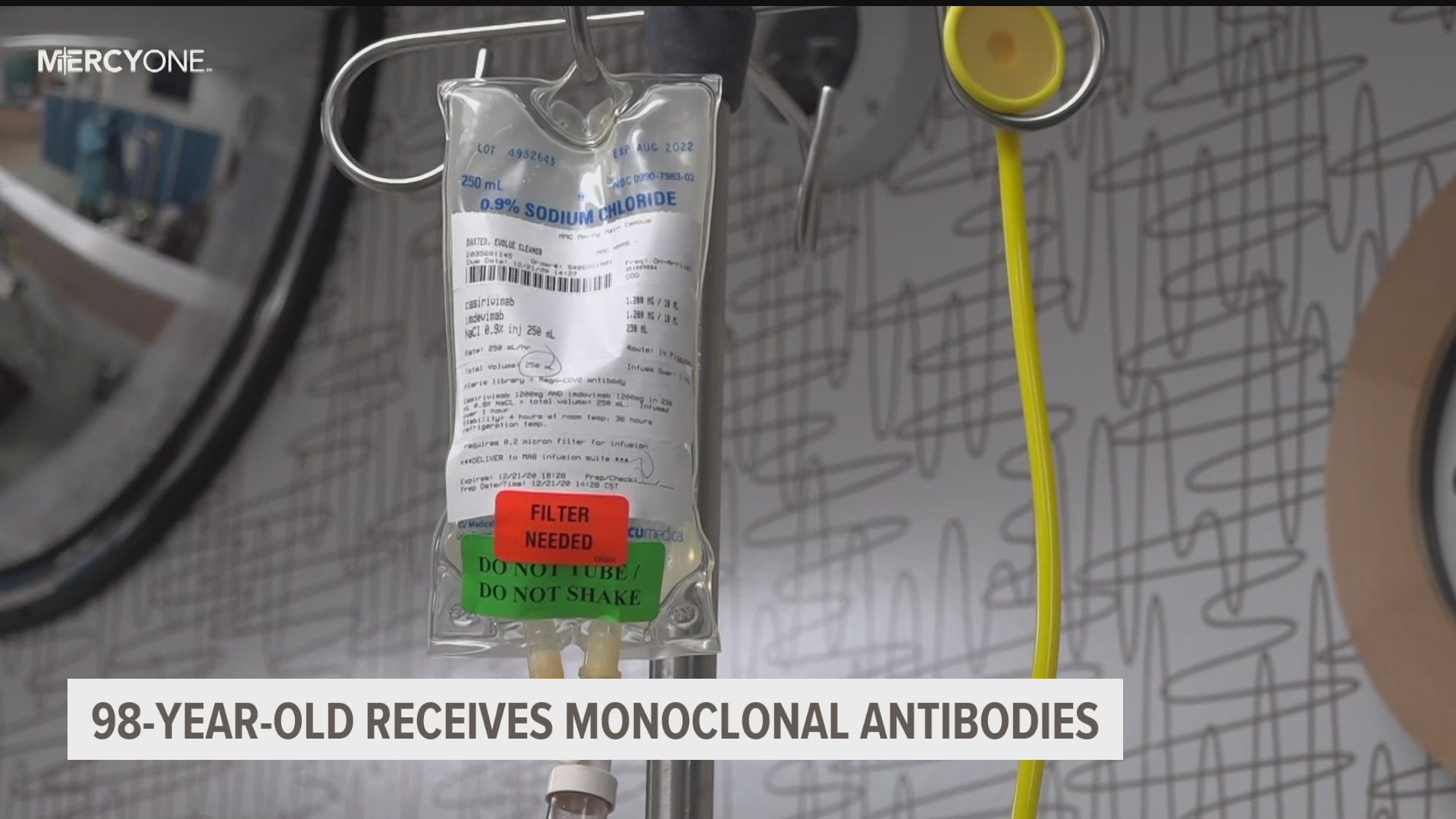 DES MOINES, Iowa — As uncertainty for when the public will receive the coronavirus vaccine continues, the battle to save those who get infected persists.

"So far out of 130 patients that we have given the treatment to, there have been only I believe, five hospitalizations which would be less than five percent," Dr. Rice said.

Monoclonal antibodies are synthetically-made versions of proteins naturally produced by the immune system, in response to invading viruses or other pathogens.

They are supposed to bind to portions of the virus to prevent it from initiating infection.

"These monoclonal antibodies provide a way of helping the body's immune system fight off the virus so that people don't develop severe disease," Rice said.

At MercyOne Des Moines, doctors have given out two forms of the monoclonal antibodies treatment for patients with COVID-19: Regeneron and Bamlanivimab.

Rice said recipients of this infusion treatment have to be referred by their primary care physician and must have chronic medical conditions.

It has also been authorized for children 12 and older who weigh at least 88 pounds and have chronic medical conditions.

After patients get the treatment, they are able to go home to recover, which helps make sure other hospital beds are available.

98-year-old Evolue Baxter of Des Moines got the treatment after coughing a lot, and then preceding to take a coronavirus test.

"They said it was positive so that means I had that virus," Baxter said.

Baxter is happy she got the treatment, saying it's allowed her to get back to her active lifestyle.

She also suggested anyone with the opportunity to get the antibodies, should.

"I believe in it because I don't think it would have been invented, or brought on the market if it wouldn't help," Baxter said. 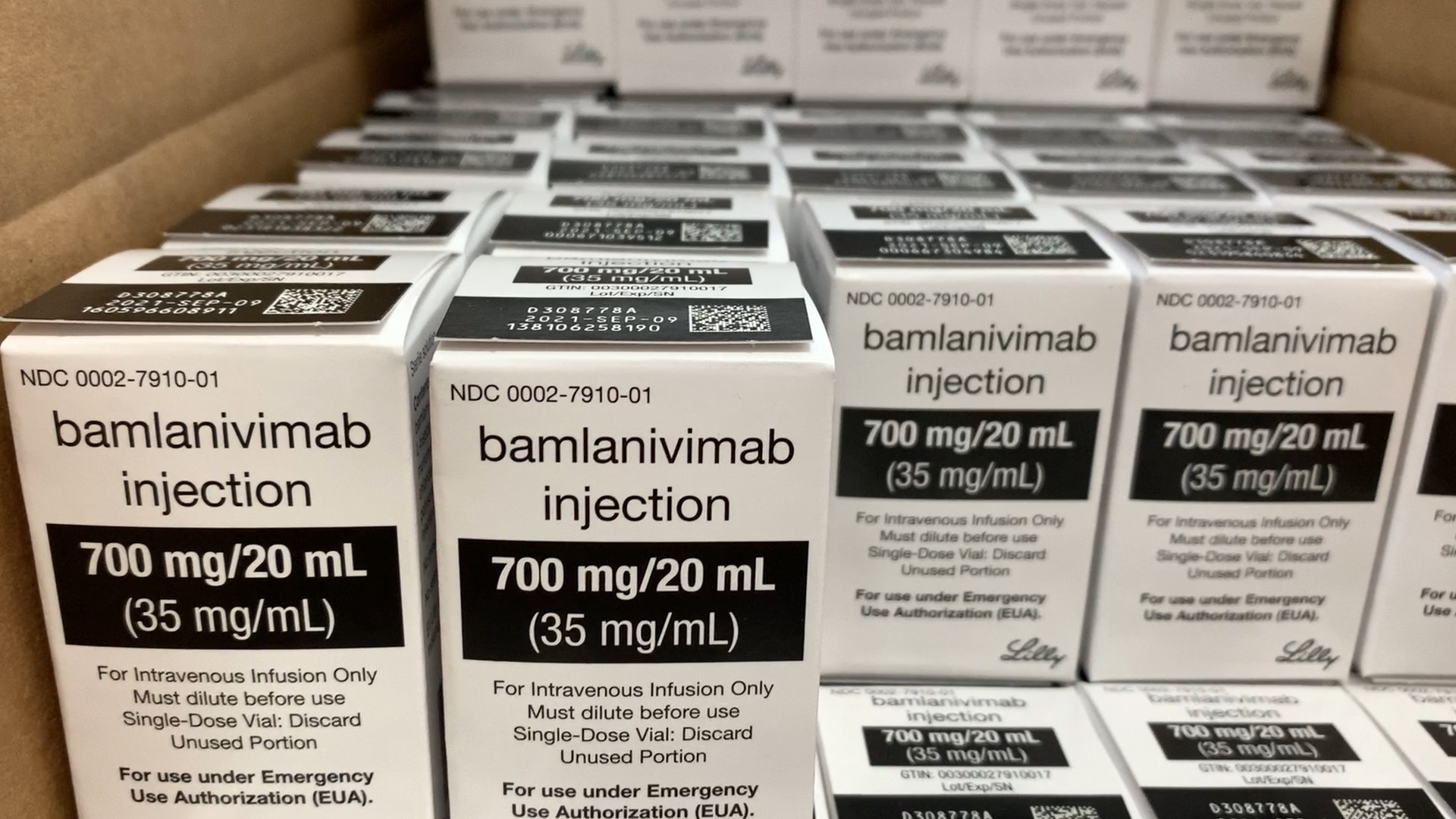 Monoclonal Antibody Infusion Des Moines, Iowa (IA), MercyOne
Bamlanivimab, or BAM and casirivimab + imdevimab were recently approved by the FDA and are the first of what is likely to be multiple outpatient, non-vaccine, treatments. Monoclonal antibody treatment is a neutralizing antibody medicine - meaning, it contains man-made antibodies that are like the antibodies of patients who have recovered from COVID-19.

Baxter's doctor, Dr. Kenneth Andersen, said he recommended this treatment for her because he wanted to make sure she would not get severely ill from the virus.

"Personally, I would recommend the monoclonal antibody treatment," Andersen said.  "Verses convalescent plasma, which the amount of antibodies varies from patient to patient. So, if you're giving the synthetic version you're actually able to give a more uniform dose."

Andersen lost his elderly mother to COVID-19 in September.

This treatment had not been given the FDA emergency use authorization yet, so he said recommending this to his elderly patients is his way of honoring his mother.

"It gives me some comfort in the fact that I'm able to alleviate the suffering of others," Andersen said.

He also said because this treatment must be administered within at least seven to 10 days of the onset of symptoms to potentially be effective, individuals should speak with their doctors as soon as they notice symptoms.

RELATED: Experimental COVID-19 treatment given to Trump gets FDA authorization

RELATED: Fauci: US could soon give 1 million vaccinations a day