During their afternoon meeting, Polk County officials warned residents of the consequences of gathering over the holidays during the pandemic. 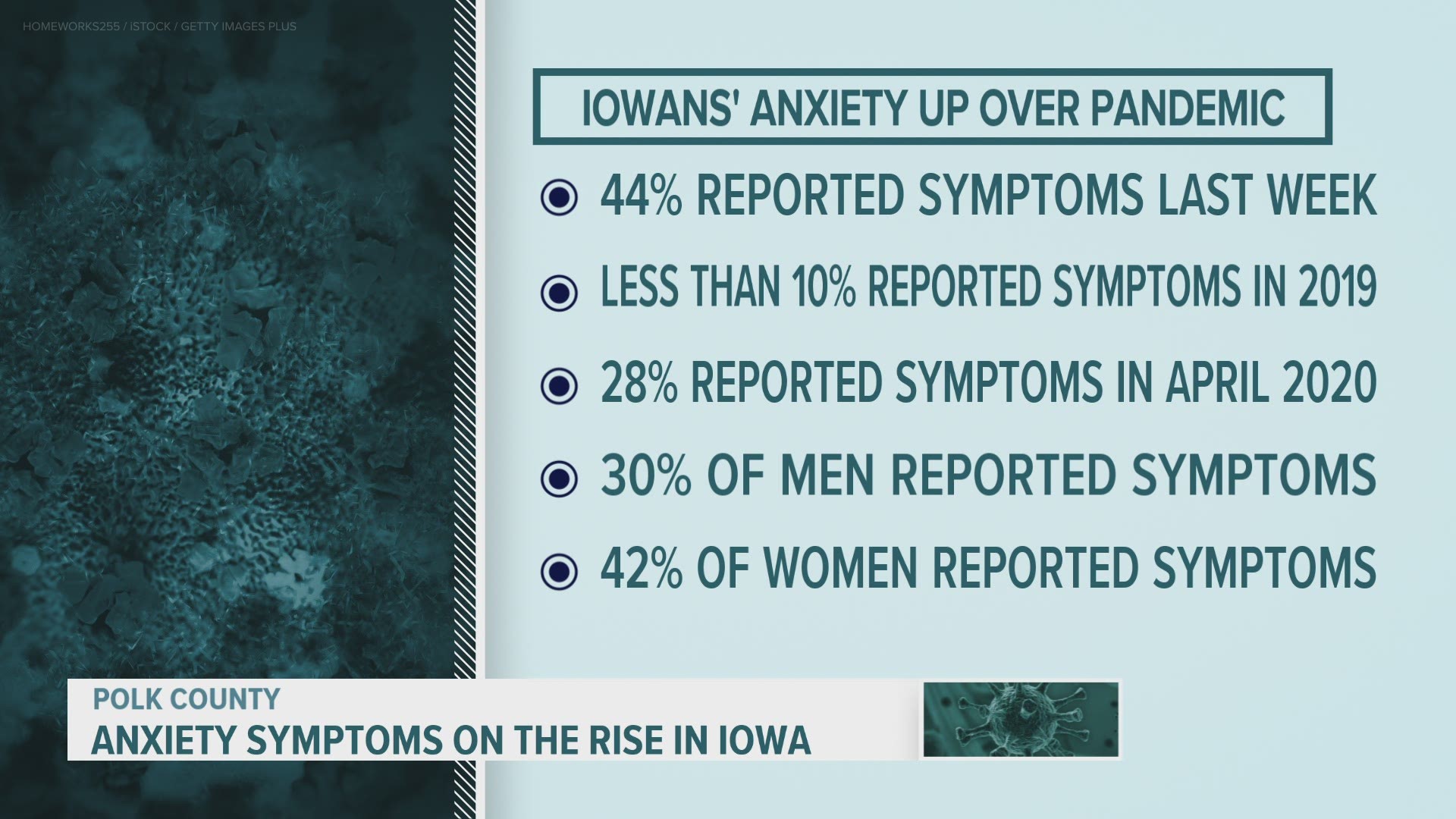 DES MOINES, Iowa — While there is some stabilization in COVID-19 data in Polk County, health officials warned residents of the consequences of gathering with family over the holidays during their weekly stakeholder meeting Tuesday afternoon.

"We are still seeing high sustained transmission of the virus throughout our community," said Polk County Health Department Director Helen Eddy. "We need to drive our infection rates significantly lower between now and January, because if we do not, we will be facing a particularly dark winter."

Again, Eddy urged residents to rethink their Thanksgiving plans to celebrate the holiday safely. She gave the following tips during the meeting:

Trends and models for Polk County

Dr. Megan Schaeffer, the county's contracted epidemiologist from Aperio Statistical Consulting, reported that there is some stabilization in Polk County's COVID-19 numbers, however, she said "we are still in a very precarious situation."

Here's a glimpse at the county data compared to the state:

Schaeffer noted the small drop in virus activity in Polk County schools, which aligns with some reductions in overall county data. She said there are still hundreds if not thousands of students quarantining, which typically indicates that there were exposures where masks were not worn.

A predictive model for the state shows that Iowa is starting a downward trend in new cases. Schaeffer said while the downward trend looks good, it'll only continue for a maximum of possibly two more weeks. The trend still has the state at over 1,000 cases per day over that time.

As for Polk County, Schaeffer said it's on a similar trend.

"Though I think what's really important to hone in on here is that even with a couple of weeks of deceleration, we're still seeing over 200 new cases per day in Polk County. We really want that number to be below 70, if not even lower than that," Schaeffer explained.

Schaeffer said the goal of 70 new cases per day could be difficult to meet if folks are out traveling over the holidays.

Here's a look at other activity models for Polk County:

Hospitalizations are predicted to stabilize, according to Polk County officials. As of Tuesday afternoon, 222 residents in the county are hospitalized from the virus, a decrease of 25 since last week.

"We hope this trend continues. We know that the mitigation efforts that we put in place will help us with this," said Franny Medeiros with Polk County Emergency Management.

Medeiros reported that the county has been working over the last week to coordinate with critical access hospitals to provide patient care and information to physicians so the patient can stay there versus transferring to the metro.

"We're also exploring options to align hospital transfer systems for clarity on locations of beds that would exist, during times of surge," Medeiros included. Finally, Medeiros said they're still working on an alternate care site plan should the county need one in the future.

"Any decision to open an alternate care site would be with the state, local health departments and emergency management agencies in partnership with all the hospitals and health care systems in the region," Medeiros said.

She concluded that there are several locations in mind and that appropriate measures to ensure those locations are compatible for this response are in progress.

Dr. Josh Akers with the Polk County Medical Examiner's Office said metro hospital morgues are "doing well" with accommodating the increase in COVID-19 deaths in the metro. All have adequate capacity, according to Akers.

"However, if capacity, were to be reached, and we do have contingency plans that could be utilized in that situation," Akers noted.

Akers also touched on the increase of overdoses in the area. 2019 saw a record number of overdoses, however, this year overdoses have increased by 12%, according to Akers.

Staying vigilant over the holidays

Even though case and hospitalization trends are encouraging, officials still want residents to remain vigilant when it comes to the virus. In fact, Kari Lebeda-Townsend with the Polk County Public Health Group said there have been increases in cases after every single holiday since the pandemic began, and she expects Thanksgiving will not be an exception.

"With this Thanksgiving holiday this week, we are increasingly concerned at the number of people we see traveling to see their family and friends over the holidays and the prospects of holiday gatherings," Lebeda-Townsend explained.

"Thanksgiving gatherings, large or small, will put people at risk for exposure to COVID-19," she said.

The county currently has a total of 315 deaths.

A third vaccine, this time from AstraZeneca, has been reported on as being highly effective, according to Hutch. She also touched on how the Pfizer vaccine was submitted for emergency use authorization last Friday.

Moderna is also expected to submit their emergency use authorization very soon.

"Through Operation Warp Speed, it is thought that maybe initial shipments will be mid-to-late December," Hutch said. She concluded that the county is working to initiate a vaccine management system that will allow residents to make an appointment for a vaccine and document vaccine administration.

County plans for preventing evictions and helping the homeless

Eric Kool with the Housing Group gave an update on how homeless shelters are accommodating those seeking shelter during this time. He said they're looking for ways to divert people from shelters into alternate housing as much as possible.

"When not possible, the local shelters are doing their best to follow good mitigation routines, including on-site symptom screening, social distancing, consistent use of approved face coverings and hand hygiene," Kool said.

"Preventing homelessness, however, continues to be the best strategy for reducing spread of infection in the local homeless shelters, as well as addressing the risk of community spread that is increased when people experiencing homelessness start staying with friends and family in sometimes tight quarters," Kool said.

Programs and legal protections that reduce evictions have been critical throughout the pandemic, according to Kool. He said the $800,000 given to the Polk County Housing Trust Fund from the Board of Supervisors prevented 373 evictions. That helped 601 people, including 396 children, stay in their homes.

"Unfortunately all funds for that program will probably be spent by the end of today," Kool said Tuesday, "Yet, there are more than 100 eviction hearings scheduled for next Monday alone, and more stacking up in December."

Kool said resources to help can be found on www.polkcares.org for both tenants and landlords. He noted that the Iowa Finance Authority's eviction prevention program is accepting applications until Friday, Nov. 27.

More than 40% of Iowans are reporting symptoms of an anxiety disorder, according to a recent CDC study. Iowa is second in the nation.

"I say only, it was three times the average of the year before," Cox said about April's data, "but now we're at 44% and this is a significant increase and really indicates, we're heading into what someone term a mental health crisis."

Cox said 30% of Iowa men reported symptoms of an anxiety disorder while 42% of Iowa women are reporting symptoms. Women are up by six points since April, according to Cox.

The best way to keep anxiety symptoms down is to connect with friends and family.

"Thanksgiving is a time when we normally connect with one another in-person, but these trying times require us to make an extra effort," Cox said.

Polk County Health Services and the Health Department are teaming up for a multimedia campaign for the next 45 days to encourage folks to utilize the Your Life Iowa program.

Your Life Iowa connects Iowans with crisis counselors who can talk with folks anonymously either on the phone or by chat.