COVID-19 activity in the county is trending down, but officials said it's difficult to determine if the trend will continue in light of the UK variant being in Iowa. 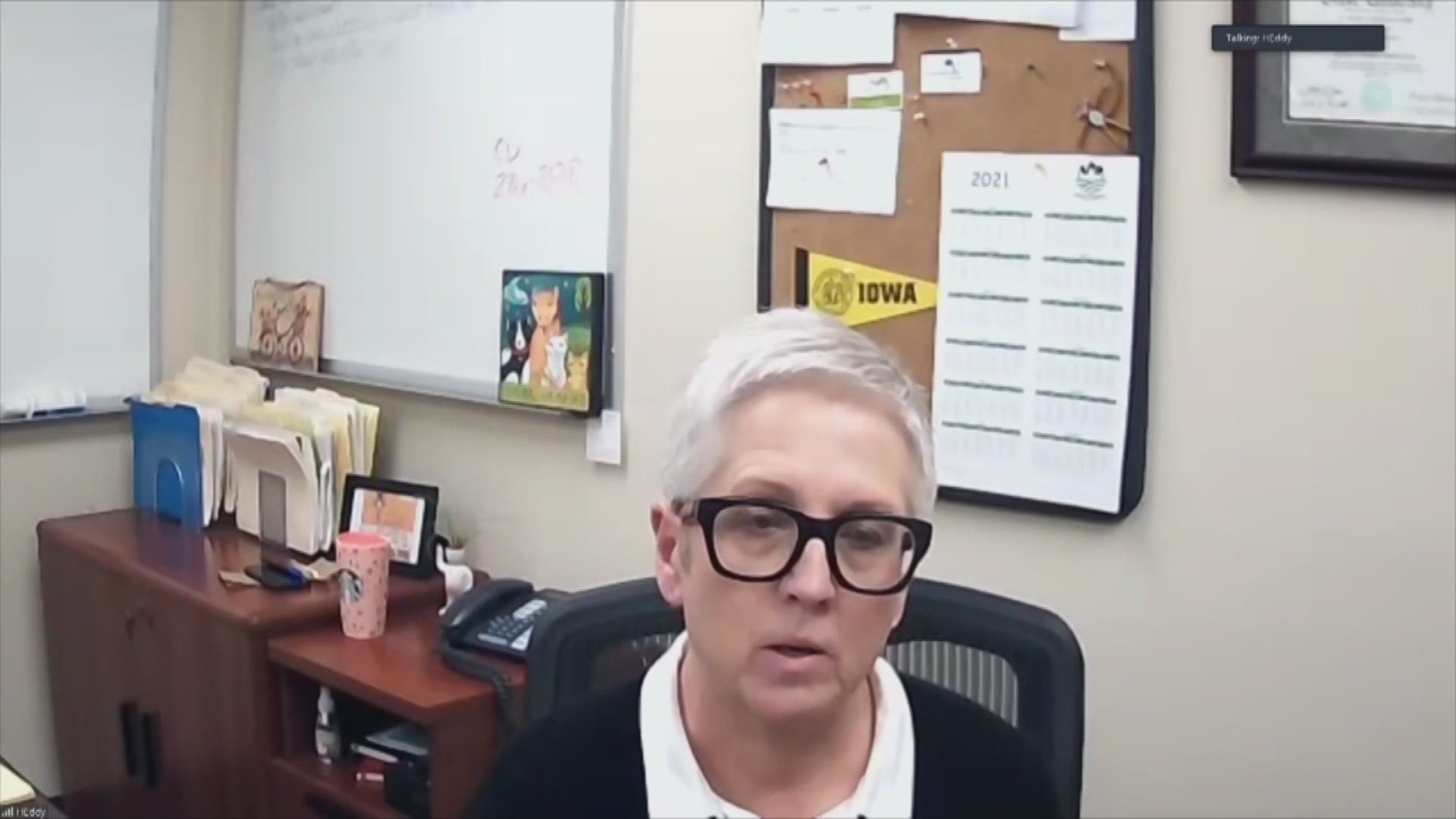 Earlier Tuesday, the Polk County Board of Supervisors also met to discuss vaccine administration in the county.

Both meetings stressed the fact there just isn't enough supply of the vaccine to go around.

"I want to emphasize that we receive allocations from the state it's an electronic process, and we have not had a solid cadence to this nor solid numbers to work from to provide much pre-planning," Eddy said during the supervisor's meeting. "We're hoping that changes as we move forward."

During the stakeholder meeting, she laid out more details on how many Polk County residents there are to vaccinate for Phase 1B.

Eddy said the 7,000 doses allocated to the county this week are being used at clinics, pharmacies, occupational health and at the Polk County Health Department.

She reminded residents that the county runs on a "just in time" schedule for receiving vaccine allocations.

The county receives vaccines on Sunday, administers them through the week via appointments until supply is out, and then gets more in on the following Sunday.

RELATED: Here's how to find a COVID-19 vaccine provider in Iowa

What's going on with Dowling Catholic?

Residents listening to the stakeholder meeting did not hold back their concerns about Dowling Catholic High School, a private school, holding a vaccine clinic for staff on Friday.

Many questioned why the school was selected first for staff to be vaccinated. But that's not actually how it worked out, according to Dr. Patricia Newland with UnityPoint Health.

She said the school reached out to the vaccine provider in early January to discuss opening a clinic.

"We have been working with many school districts," Newland said. "And at the end of the day, you want shots in arms and Dowling was ready."

Newland said UnityPoint is working with four to five other school districts to set up clinics and get shots in those arms.

"We've had ongoing discussions with other districts and are open to partnering with even those that we haven't, don't have things to set up with as long as we have vaccines available," Newland said.

"The majority of our allocated vaccine, though, is going to those individuals who are 65 and over, who are at highest risk for hospitalization and death."

"We can't accommodate those kinds of requests, and yet, Iowans hear that it's happening out there. So they sense that there's an unfairness to that and a sense of, you know, somebody's done something wrong," McCoy said. "

He called the developments at Dowling "a frustrating experience."

"It just seems to me that we ought to be protecting the most vulnerable," McCoy said.

Residents were met with good news about virus activity, which has been trending downward for the last few weeks, according to Dr. Meghan Shaeffer with Aperio Statistical Consulting.

"Activity is stabilizing and actually looks fairly good from a deceleration perspective," Schaeffer said. "It's difficult to say whether we will continue a downward trend or stabilize."

Schaeffer had one theory for the stabilization: immunity.

"We have a fair amount of people who have some immunity, many of whom obtain that immunity in the month of November, and then a small but emerging group of folks who are acquiring immunity through vaccination."

Polk County struggled for weeks to dip its 7-day positivity rate below 13%, and Schaffer said the county finally did so Tuesday with 10%.

"One note to reiterate though this is still a very high level of activity," she said.

The county averages around 150 cases per day, but that number should be half of that to "really know that we've got a good, solid handle on the transmission in our community", according to Schaeffer.

About 20% of cases reported were detected in individuals 0-17 years old.

This could be due to spring sports getting back into action.

Among schools in the county, Schaeffer said there are a "decent" number of cases and some localized outbreaks at some schools. North Polk and Bondurant have smaller outbreaks, with five and 12 students or staff cases as of Jan. 31.

As far as the newly found variant goes in Iowa, Schaeffer said she is watching it "very closely."

The United Kingdom variant, also known as B.1.1.7, is in 33 states so far with 470 confirmed cases. Three of those cases are from Iowa.

"Those cases are rapidly increasing in terms of identification, they're not yet driving surges," Schaeffer said.

The South African variant, or B.1.3.5.1, "is definitely a concern", Schaeffer added.

"It has the ability to elude some previous immunity obtained from having [the] disease and is also presenting a less efficacious match with the vaccine," she said.

This means that vaccines already being administered may not be as effective at protecting those from the variant. Only South Carolina and Maryland have reported cases of it in the U.S.

The full Aperio report can be viewed below. Previous reports can be found on the Polk County Health Department's website here.