'I fight it every day': Leader of Iowa National Guard had COVID, now urging all Iowans to get vaccinated

Adjunct Gen. Ben Corell joined the governor to share his experience with COVID-19, revealing he was hospitalized for a week in November. 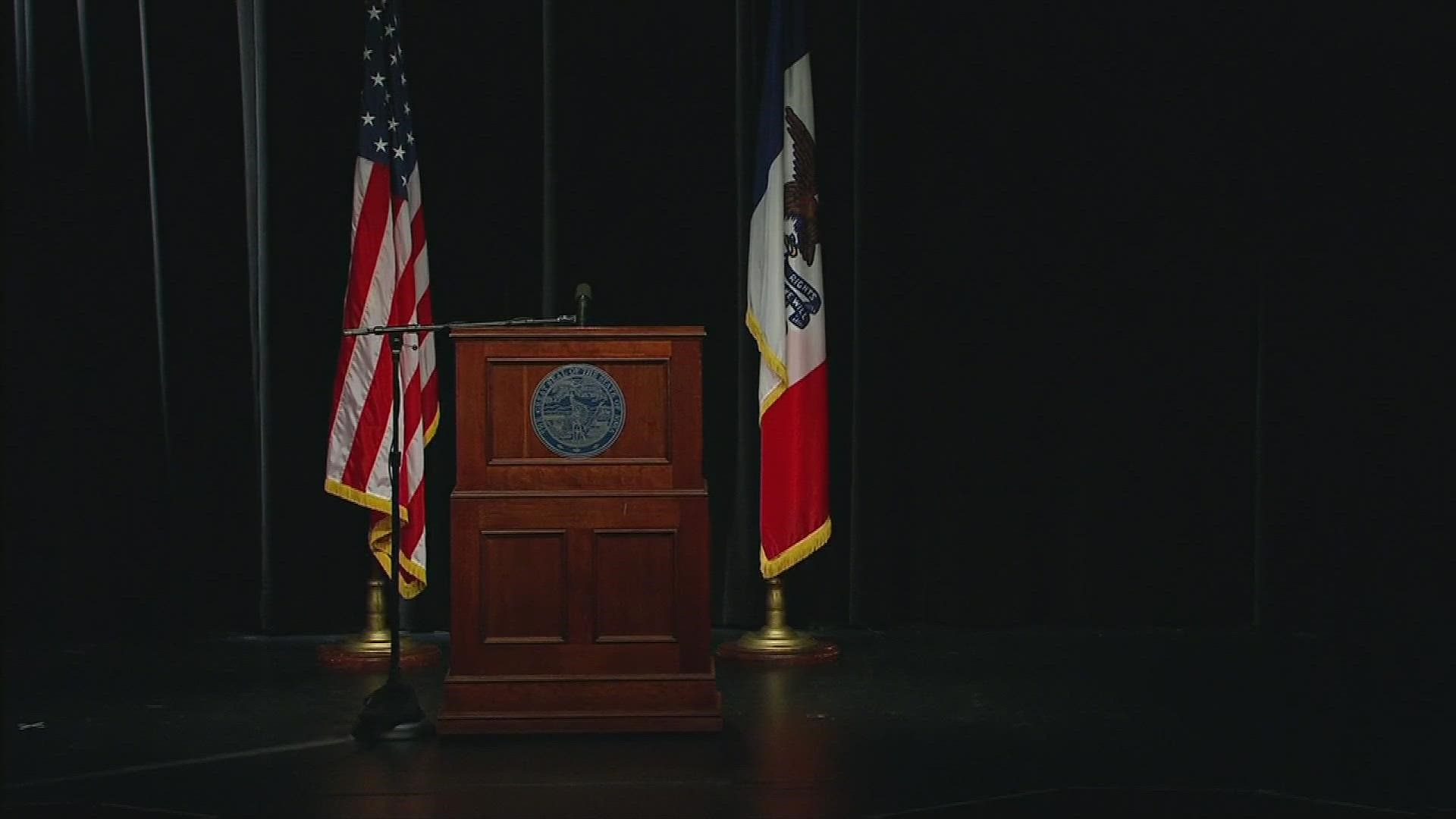 JOHNSTON, Iowa — Gov. Kim Reynolds said Wednesday vaccine hesitancy is to blame for 43 counties in the state denying some or all of their COVID-19 vaccine allocations for next week.

This comes just over a week after the Centers for Disease Control and Prevention (CDC) and the Food and Drug Administration (FDA) recommended a "pause" in administering the Johnson & Johnson vaccine following reports of blood clots in six women.

"Unfortunately, Iowa and states across the nation are seeing a decline in uptake of vaccine since the J&J announcement," Reynolds said Wednesday during her weekly press conference. "As a result, this week 43 counties have declined some or all of their vaccine allocation for next week."

The governor added it's disappointing to see the shift, but counties are doing the right thing by denying the allocation. This way, those doses can be sent to communities that need them more.

^^Note: This is protocol. If a county doesn't have demand for vaccines, they have to decline their weekly allocation. This protocol was put in place to prevent vaccines from sitting unused. The declined vaccines will be then targeted to areas with high demand.

"But even in large communities, clinics are now filling up over the course of a couple of days rather than just a few hours," Reynolds said. "So this shift isn't, again, unique to Iowa. Vaccine hesitancy is beginning to become a real factor across the country."

According to a Kaiser Family Foundation study, 25% of adults 18-29 years old are waiting to see if they will get the vaccine. The study also found middle-aged adults are least willing to be vaccinated.

Reynolds said it's important to understand why people are feeling hesitant so officials can take a more targeted approach in vaccinating these communities.

Reynolds spoke of an Iowan who reached out to her with their own vaccine story. The man contracted the virus after completing his vaccination series.

He was admitted to a hospital and asked his lung doctor why he got the virus after his vaccination. The doctor told the man that getting vaccinated may be the only reason he survived the illness.

"I want to appeal to everyone who's hesitating," the governor said. "If you're opting to 'wait and see,' what are you waiting for? If you've been a 'hard no' from the start, what's your reason? And if you can't answer those questions, maybe, we hope, you take the time to reconsider."

'If you’re opting to wait and see, what are you waiting for?': @IAGovernor strongly encourages ALL Iowans to get vaccinated. She says if you're hesitant, think long and hard about the reason why. She says the pros outweigh the cons and the vax is your best defense against COVID.

While the story ingrains the fact that vaccines work, another speaker at the press conference would share his story about his COVID-19 experience and his push for Iowans to get vaccinated.

Adjutant Gen. Ben Corell with the Iowa National Guard revealed he tested positive for the virus back in November. Corell said he has always been a healthy individual, never missing work for being sick.

"I had not been a patient in a hospital since the day I was born," he said. "My job requires me to be mentally tough, physically fit and maintain a healthy lifestyle."

The general said he had the whole "laundry list" of COVID-19 symptoms.

"I could hardly get out of bed. My wife took me to get tested. And after a couple days, I got the phone call that says 'You're positive with COVID-19.' I'd been careful," Corell said. "I had done the things that the Iowa Department of Public Health and the CDC advises us to do. But I still got the virus."

Corell said he was in denial that he was as sick as he was. Days later, his wife gave him the choice of either getting in the car to go to the hospital or getting an ambulance to take him in.

"I got in the car and she took me to the emergency room," Corell said. "They quickly admitted me to the hospital where I stayed for a full week, receiving medical treatment from the medical staff at UnityPoint Health, validating to me that our medical professionals have truly been our frontline heroes in this fight."

Back in November, vaccines weren't ready for administration. The only tools available to fight the virus were mitigation efforts, like wearing a face mask and social distancing.

"Recently, we're getting the tool to help stop this virus from perpetuating. We now have vaccines. We now have renewed hope, hope to move forward without this plague following us in bringing more sickness and death," Corell said.

Even though he tested positive, Corell got vaccinated. He completed his second dose of the Moderna vaccine in March. 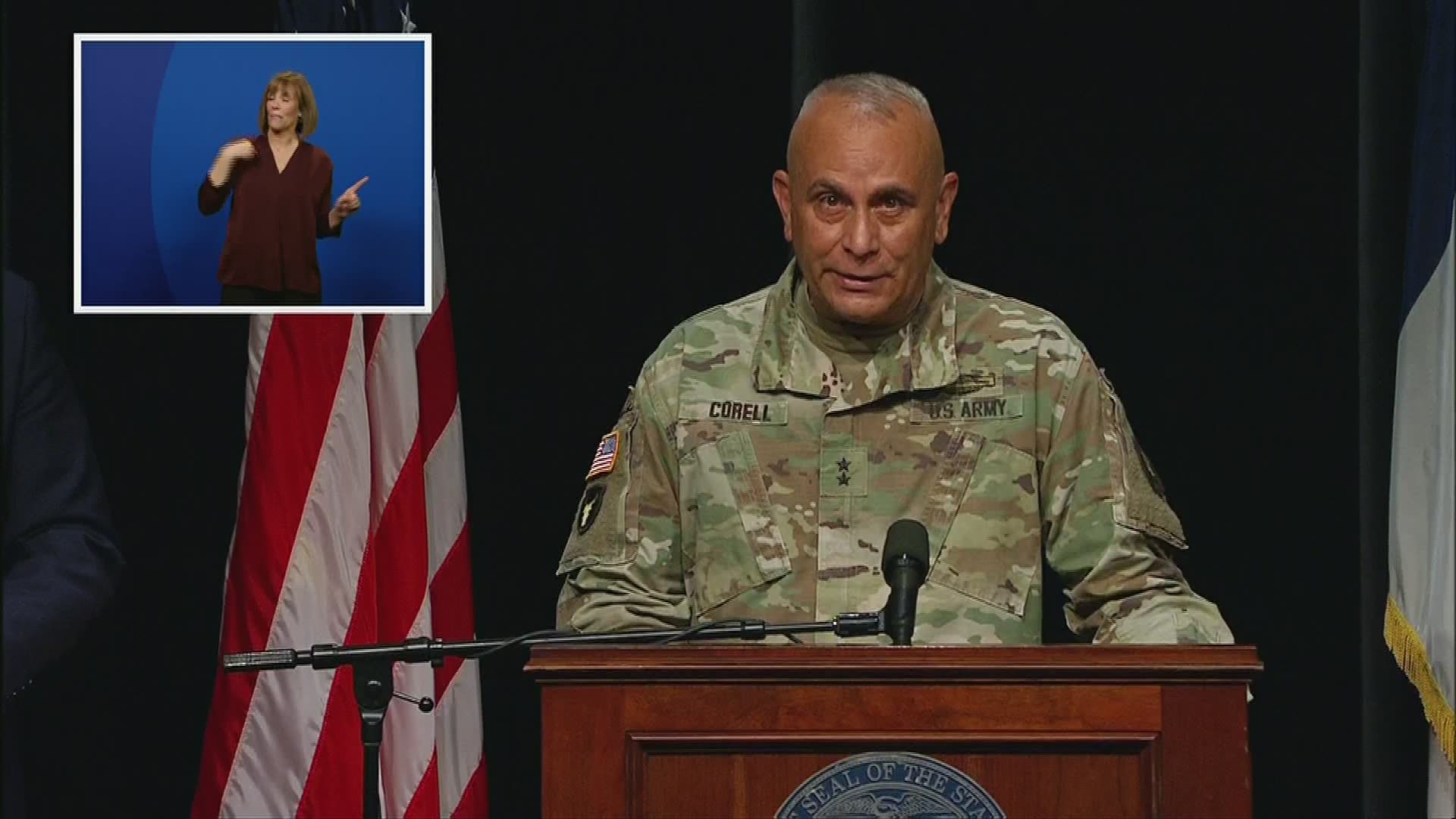 "I had no hesitation in becoming vaccinated. I did it for my family. I did it for my friends, my co-workers and for my community is going to take all of us working together to defeat this pandemic," Corell said.

The general called on all Iowans, including half of the National Guard, who are sitting on the fence about getting vaccinated.

"I call on each of you now to serve your communities in a different way. Schedule an appointment to be vaccinated," he said. "Roll up your sleeves to be a part of the solution that will lead us out of this pandemic."

Corell said he is a "long-hauler" when it comes to the virus. Moments before the press conference ended, he said he still experiences shortness of breath and lung capacity issues.

"I get up to go to work in the morning but I still do feel tired at times as well so I would say yes I fall into that category," Correll said.

"But I fight it every day."

When asked about former Minneapolis police officer Derek Chauvin being convicted on all counts in the killing of George Floyd, Reynolds responded:

"It shows that our legal system worked and that justice is being served. A jury of his peers found him guilty on all three charges and so I think the system worked, due process. And it's time that we all come together as a country, heal and continue to move forward."

The governor added the current legislative session will "continue to work" on a "Back the Blue" bill that would install qualified immunity for officers and increase the penalties on rioting and violent protests.