Gov. Reynolds said Wednesday it wouldn't be possible to partner with Microsoft "in a timely manner without significant disruption" to current scheduling systems. 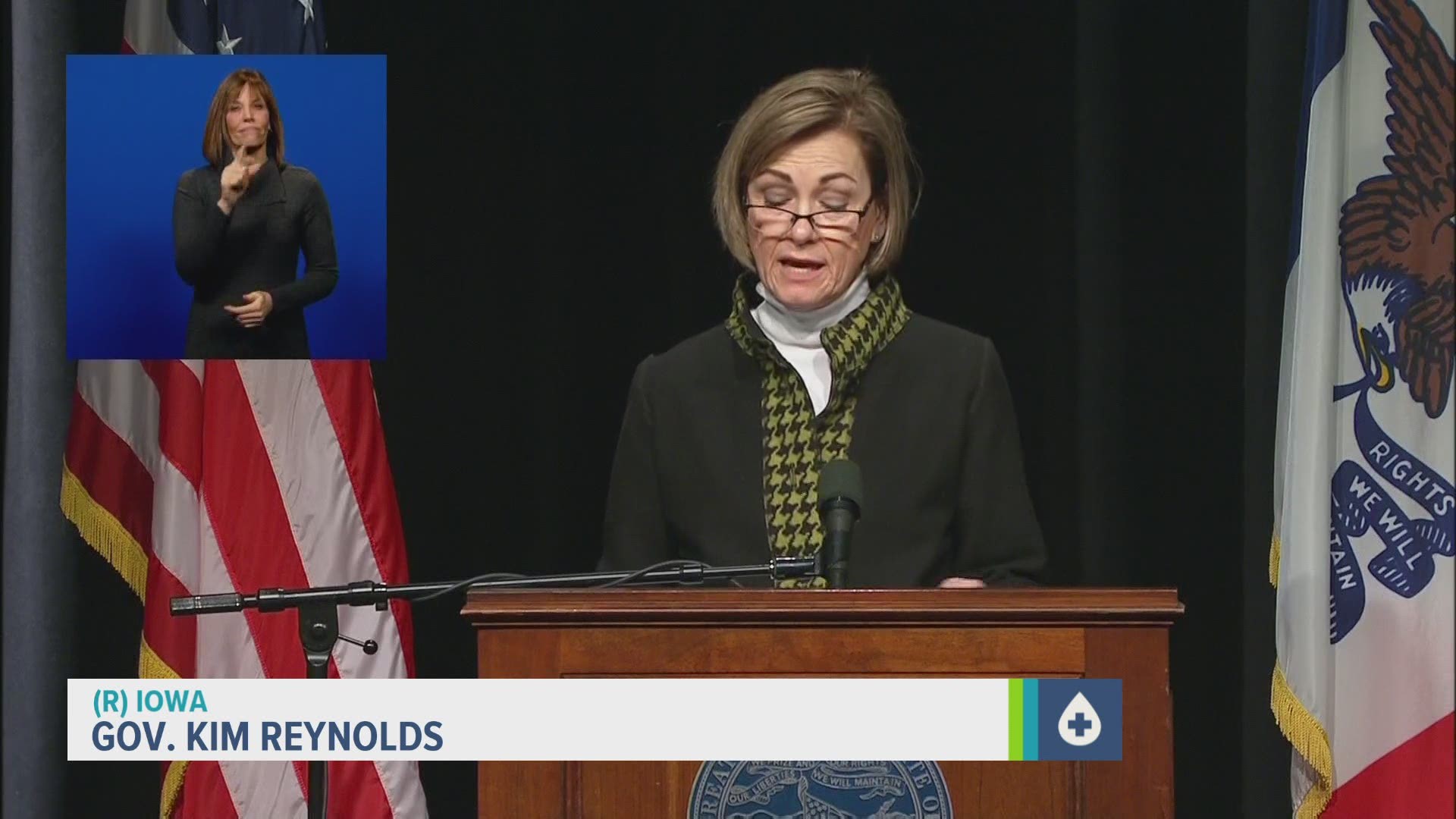 The state announced they would be partnering with Microsoft to build a statewide vaccine appointment system last week, but the governor said Wednesday such a program could cause confusion with existing systems.

"It quickly became apparent that integrating the many already-existing registration and scheduling platforms that are used by some of our public health departments, pharmacies, as well as other vaccine providers, [that] it would not be possible in a timely manner without significant disruption to their current systems," Reynolds said.

“It quickly became apparent that integrating the many, already existing, registration & scheduling platforms that are used by some of our public health depts, pharmacies, as well as other vaccine providers, it would not be possible in a timely manner w/o significant disruption.”

"So, we're now shifting our focus from building a different system to optimizing the overall registration and scheduling process for Iowans," Reynolds said.

The state will still continue its search for a call center for Iowans to schedule vaccine appointments and ask questions about the vaccine, and the governor said the state is researching what other states are doing to figure out the best course of action.

"We're taking a look at 2-1-1 the call center that we have, and we're looking for opportunities that we can enhance that," Reynolds said. "Part of the issue is Iowans are already used to utilizing that call center and so that's normally where they would go and we just want to be careful about layering other options on top of that."

Reynolds wants the state wants to make sure the phones are staffed appropriately and that they're helping individuals that can't use the internet to look for an appointment.

Reynolds said her team "dug into" options for both the call center and scheduling system.

"It just didn't make sense for us to move forward, especially with the registration and scheduling component, because of all of the different providers that are tied into that right now and the systems that they had," Reynolds said.

"So we're continuing to look for ways that we can streamline the process, and make sure that we're meeting the needs of Iowans as we're still so limited in the vaccine."

Since last week's update, the Iowa Department of Public Health told five counties that they wouldn't be receiving this week's shipment of COVID-19 vaccines after failing to administer at least 80% of their vaccines.

The state reversed course on Monday, and Reynolds addressed the matter on Wednesday.

"I want to be very clear that that was not meant to be punitive," she said. "Instead, it was intended to allow local public health officials a week to administer the remaining supply of vaccine before their next shipment arrived."

"Each of these counties had several 100 unused doses still on hand and their administration rates ranged from 25% to 53% the previous week," Reynolds said. "With demand for vaccine far exceeding supply, there's no reason that available doses should go unused week over week. Vaccine should be going into the arms of Iowans, not sitting in storage."

All 99 counties will receive their allocation as normal, the governor added.

Vaccine allotment to increase by 24% next week

The Biden administration informed governors on Tuesday about another increase in vaccine shipments starting next week. An additional 2.5 million doses will be available on top of the 11 million currently being allocated nationally.

"So that's a new total of 13.5 million doses that will now be distributed weekly among all states," Reynolds explained. "In Iowa, that means our allocation of 49,900 this week will be almost 62,000 doses next week, which is an increase of 24%."

The White House also told governors that the Johnson & Johnson vaccine could be approved for emergency authorization by the end of February and committed to providing states with allocation projections beyond the current three-week time period.

"While supply will be limited to just a few million doses at the initial rollout, Johnson & Johnson's goal is to distribute 100 million doses by the end of June," Reynolds said.

"Not only will this make a positive difference at the state level, it will also enable our local public health departments to plan longer-term with their vaccine partners to coordinate clinics in communities that they serve," Reynolds said of the allocation updates.

The White House is also pushing states to provide more vaccination opportunities on the weekends since that's when most people have time to get vaccinated.

"I fully support this approach," Reynolds said. "Increasing vaccination clinics on the weekends will help us meet our goal quickly vaccinating as many islands as possible.

"And I know that's something that we all want."