Darci Evans, an ER charge nurse, said mental health therapy helped her get her life back on track. 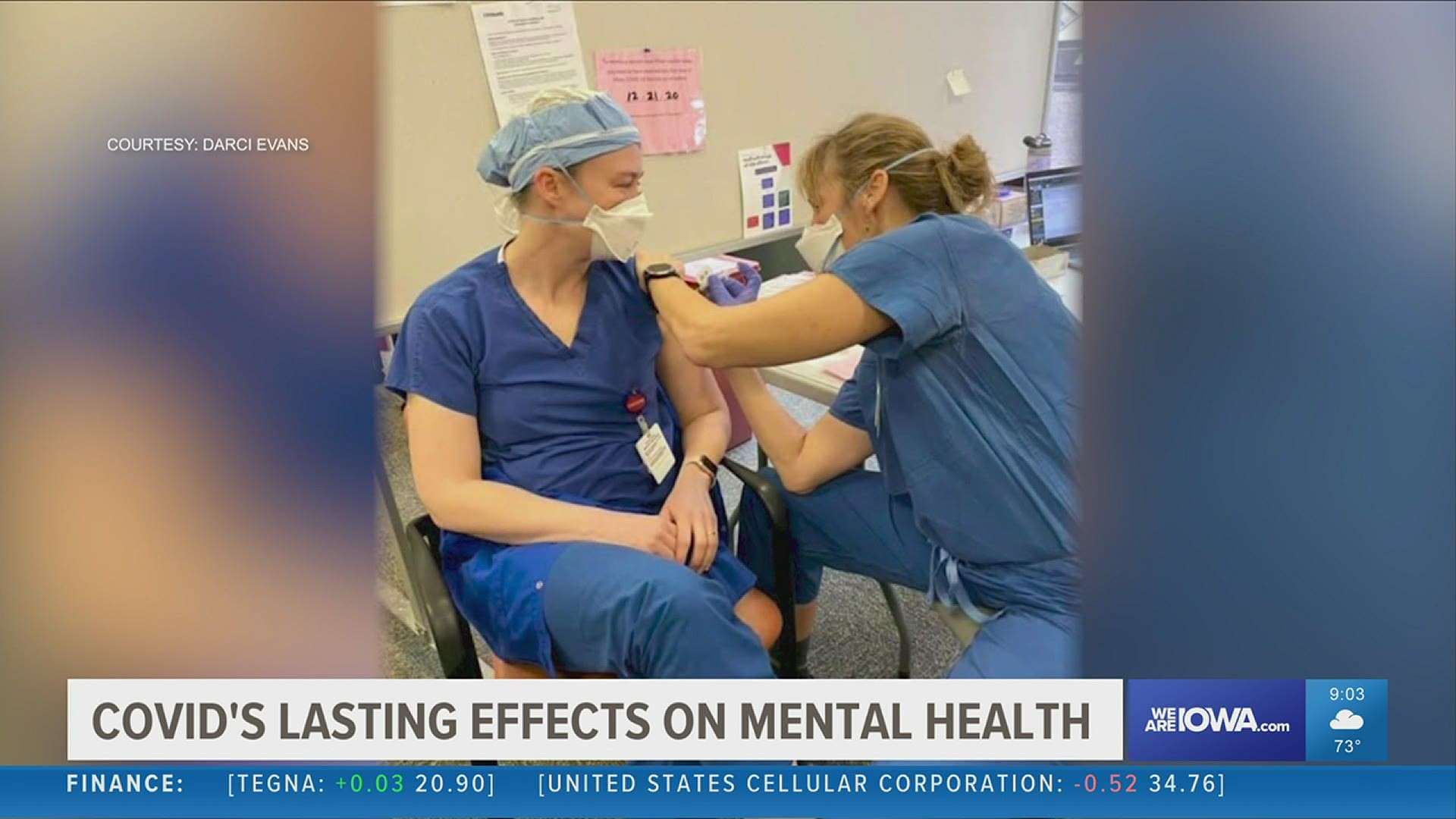 CLIVE, Iowa — More than 60% of U.S. health care workers reported feeling in a worse mood throughout the COVID-19 pandemic, according to a study released in February 2021.

Evans, who owns and operates two gyms in central Iowa, is also an ER charge nurse at a hospital in Madison, Wisconsin.

Over the past 20 years, she has seen trauma day in and day out. But when the pandemic hit, her regular outlets to relieve stress weren't available, and her daily trauma intensified.

"I would say that how we can function in those high-stress environments is that we have some sort of coping or normalcy outside of our career,"  said Evans. "I think for the first time what you saw was there was no healthy coping mechanisms."

On top of her typical care, she now had the challenge of comforting dying patients who weren't able to have their family by their side.

"They just need to see their person. To not be able to give them that, just like tore me apart," said Evans.

For her, it was personal.

When Evans was 23 years old, she was at the bedside of her dying mother, who lost a battle with chronic lung disease.

"She was so scared to die alone, that haunts me... I can't imagine that there's people that didn't have their family at their bedside," she said. "Finally I was just like, 'I can’t do this. I’m not sleeping, I feel so like my life feels like it’s spinning out of control, and my head and my heart and my feet are never in the same spot.'"

"I'm like, I’m an ER nurse. I have a dark sense of humor. I’m very cynical, my son always says I’m sarcastic," said Evans. "I can’t handle sitting in a room and talking about feelings."

However, Evans' doctor convinced her she had someone in mind who would be the perfect fit for her. After her first appointment in September, she said it felt as though a weight had been lifted.

"At the end of the first session, I was just like, oh my gosh, that was amazing!" Evans said. "If you’re transparent and honest about how hard this year has been, there are so many people that for whatever reason they’re like holding that back."

Gym owner and ER charge nurse Darci Evans had always been hesitant about #mentalhealth therapy. "It's this ingrained culture where it's like there's something wrong with you [if you seek help]." Her PCP convinced her to try it out in September, and she says her therapist (1/2) pic.twitter.com/gaxVqI5V31

Joby Holcomb, a therapist in West Des Moines, said many health care workers may still be shouldering the trauma they experienced over the past year, serving as first responders.

"Typically now is when we start to see maybe some of those symptoms actually come out," Holcomb said. "Whether that's because individuals have a lot more capacity now to identify and process some of those complex traumas they just experienced or because those compartments start to naturally open up on their own."

He said it's important for people to seek help sooner rather than later, even if they feel they've survived fine without it.

"No one is immune to the effects that health care workers have to experience," Holcomb said. "It's okay for you to seek help."

Evans acknowledges her initial hesitation may have had something to do with the societal stigma associated with therapy.

"It's like this ingrained culture where it’s like there’s something wrong with you [if you seek help]," she said.

Now, she sees it just like going to the gym.

RELATED: Psychologist explains how the pandemic is impacting kids