Piecing together the night of Breonna Taylor's death

Attorneys for Taylor's family say no Louisville officers helped her until after her boyfriend, Kenneth Walker, was called out of the apartment. 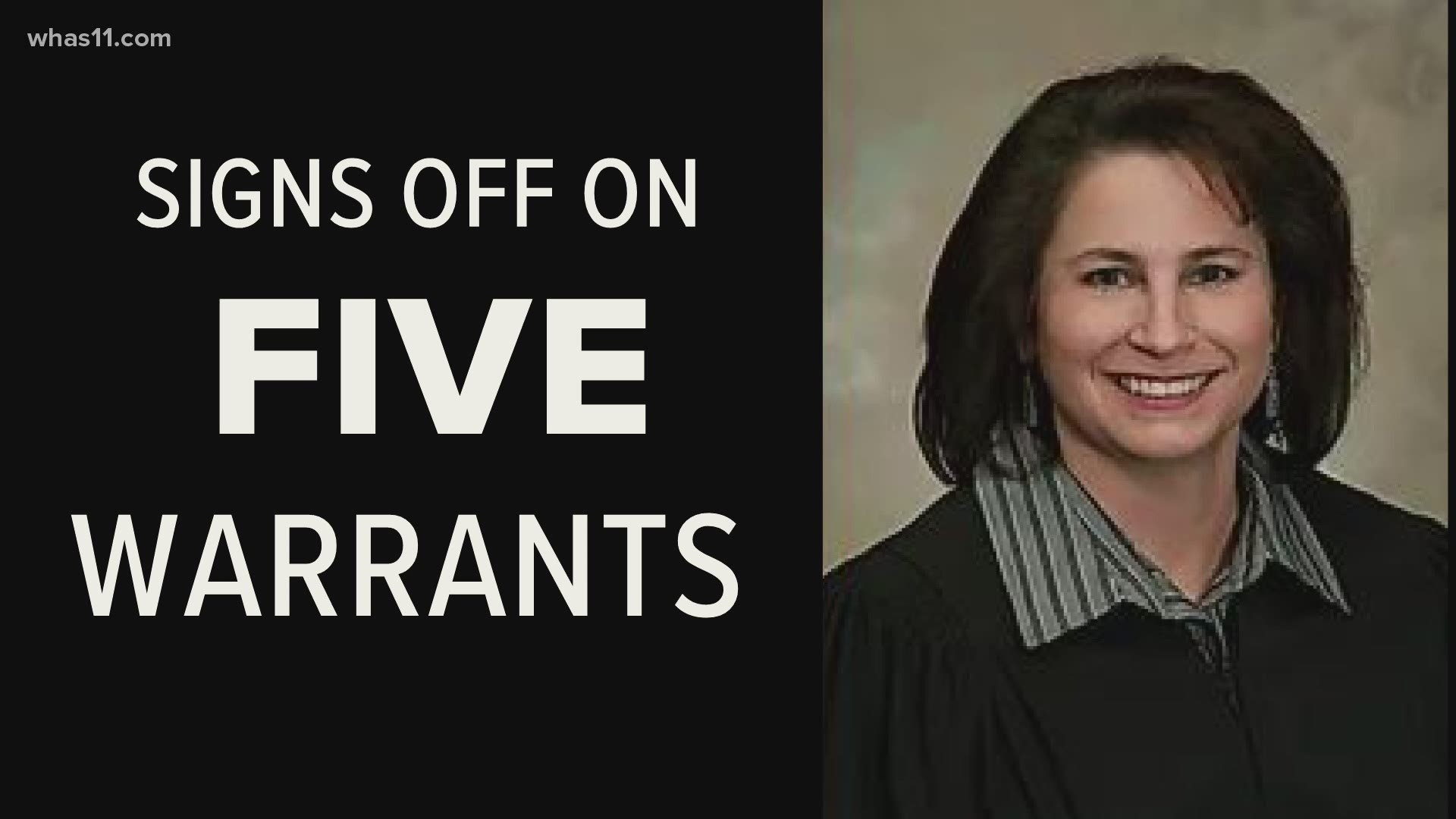 LOUISVILLE, Ky. — Four months after Louisville police shot and killed Breonna Taylor, the public is still waiting to hear the results of Kentucky Attorney General Daniel Cameron's investigation. Now, we are using public record to piece together what happened the night she died.

Judge Mary Shaw signs off on five warrants as part of a large narcotics investigation. Three warrants were for properties on Elliott Ave. in west Louisville. Detectives wrote they were looking for drugs, weapons, electronics and mail related to illegal drug activity. A fourth warrant was for a house on Muhammad Ali. The fifth warrant was for 26-year-old Breonna Taylor's south Louisville apartment.

How was Taylor connected? She was not the main suspect in the case, but she was named on the warrant. Detectives said they witnessed their main suspect, Jamarcus Glover, arrive at Taylor's apartment in January of this year, go inside and then come back out with a package. Police said Glover then got into his car and drove to the Muhammad Ali address, which the detective said was a "known drug house."

The warrant goes on to say that a US Postal Inspector verified that Glover had been receiving packages at Taylor's apartment and that it is "not uncommon for drug traffickers to receive mail packages at different locations to avoid detection from law enforcement."

Detectives also wrote they believed Glover may be keeping narcotics and or proceeds from the sale of narcotics inside Taylor's apartment "for safe keeping."

On the night of March 12, Sgt. Jon Mattingly and several others were briefed on the plan for the execution of the warrants. Mattingly later said in a police interview that he drove by Taylor's apartment around 11:30 p.m. to scope it out.

Around 12:30 a.m. on March 13, officers parked in front of Taylor's building and walked up to her door.

"When SWAT was doing their thing at 24 Elliott, we executed ours at the same time,” Mattingly said during a police interview.

Ten miles away, officers executed a warrant at a different property on Elliott Avenue at the same time. There, police found the main suspect Jamarcus Glover and arrested him.

At around 12:40 a.m., officers began to bang on Taylor's door, setting into the motion the events that led to her death.

"Laying in bed, there's a loud knock at the door," Taylor’s boyfriend Kenneth Walker described what he first heard to police hours after the shooting.

Walker told police he and Taylor were in bed, watching a movie, when it started. The detectives say they knocked on the door multiple times.

"Knocked on the door, banged on it, we didn’t announce the first couple because our intent was not to hit the door, our intent was to give her plenty of time to come to the door because they said she was probably there alone," Mattingly said.

But she wasn’t there alone. She was in bed with her boyfriend.

"There a loud bang at the door," Walker said. "She pops out of sleep, it scared her, me too. Like who is that?"

Walker said they jumped out bed, started to get dressed and he grabbed his gun. At the same time, detectives took a battering ram against the door.

"When we come out, get out of the bed, walking towards the door, the door like comes off the hinges so I just let off one shot," Walker said. "Still can't see who it is or anything."

But Mattingly said he saw them, saying "I'm face on, about 20 feet away, right down the hallway there's a bedroom door on the right and there's a male and a female. The male is closest to the door, so to my right, and I turned the doorway he's in a stretched out position with his hands, with a gun, and as soon as I clear he fires — boom."

Walker told police shots started flying so he fell to the ground and dropped his gun. Mattingly had been shot.

"As soon as the shot hit I could feel the hit in my leg and so I just returned fire. I got four rounds off and it was like simultaneous — like boom, boom, boom, boom," Mattingly said.

Mattingly said he fired two more rounds, then told other officers he'd been shot. It was called over the radio at 12:43 a.m. according to a CAD report provided by the mayor.

Detective Myles Cosgrove fired shots from inside the apartment, while Brett Hankison "blindly fired" 10 rounds from outside, through the patio door, according to his termination letter.

"When all the shots stop, I'm like panicking she's right there on the ground, like, bleeding,” Walker said.

Operator: "911 - Operator Harris, where is your emergency?"

Walker: "I don’t know what’s happening. Somebody kicked in the door and shot my girlfriend."

Operator: "OK. Where are you located?"

Operator: "Okay - how old is your girlfriend?"

Meanwhile, officers rush to the scene on word of an injured officer. Detectives on scene put a tourniquet on Mattingly's leg as they wait for EMS.

"At some point EMS shows up," Mattingly said. "It seemed like forever...I don't know how long they took."

Mattingly was rushed to UofL Hospital where he went into surgery.

According to the Taylor family attorneys, 120 LMPD officers went to the complex in the hours after the shooting. But no one went into the apartment to provide aid to Taylor until Walker was called out.

"I'm still yelling help because she's over here like coughing and I'm just freaking out, but I'm on the phone with her mom now at this point. They keep yelling, 'Come out,'" Walker said.

He said police told him to drop his phone, so he did, and then walked backwards to the officers.

"I'm doing everything they're asking me to, slowly and surely, and I’m telling them I'm scared to death," Walker said.

As Walker surrendered to police, SWAT moved into the apartment eventually finding an unresponsive Breonna Taylor on the hallway floor.

Walker was taken into custody at the scene and driven to LMPD headquarters, where he was interrogated for several hours, the interview wrapping up after 5:30 a.m. in the morning.

"That's what we're here to figure out, man," the man conducting the interview responds.

Walker was charged with attempted murder of a police officer that morning, though weeks later the charges were dismissed.

On the afternoon of March 13, LMPD briefed the media about the overnight, officer-involved shooting.

"The victim who died…is um…we're still working through what her involvement was in the narcotics investigation," Lt. Ted Eidem said when asked about the victim. "Her identity will be released by the coroner's office at a later date."

As police briefed the media, the LMPD Public Integrity Unit searched through Taylor's apartment. Investigators got a warrant right after the shooting and spent much of the day looking for evidence including blood, hair, fingerprints clothing, weapons and electronics.

Two days later, on Sunday March 15, we first learned the name of the victim. The Jefferson County Coroner identified her as 26-year-old Breonna Taylor.

More on the Breonna Taylor case:

► Make it easy to keep up-to-date with more stories like this. Download the WHAS11 News app now. For Apple or Android users.