Scammers are now coming to people's doors to pick up cash or prepaid credit cards. 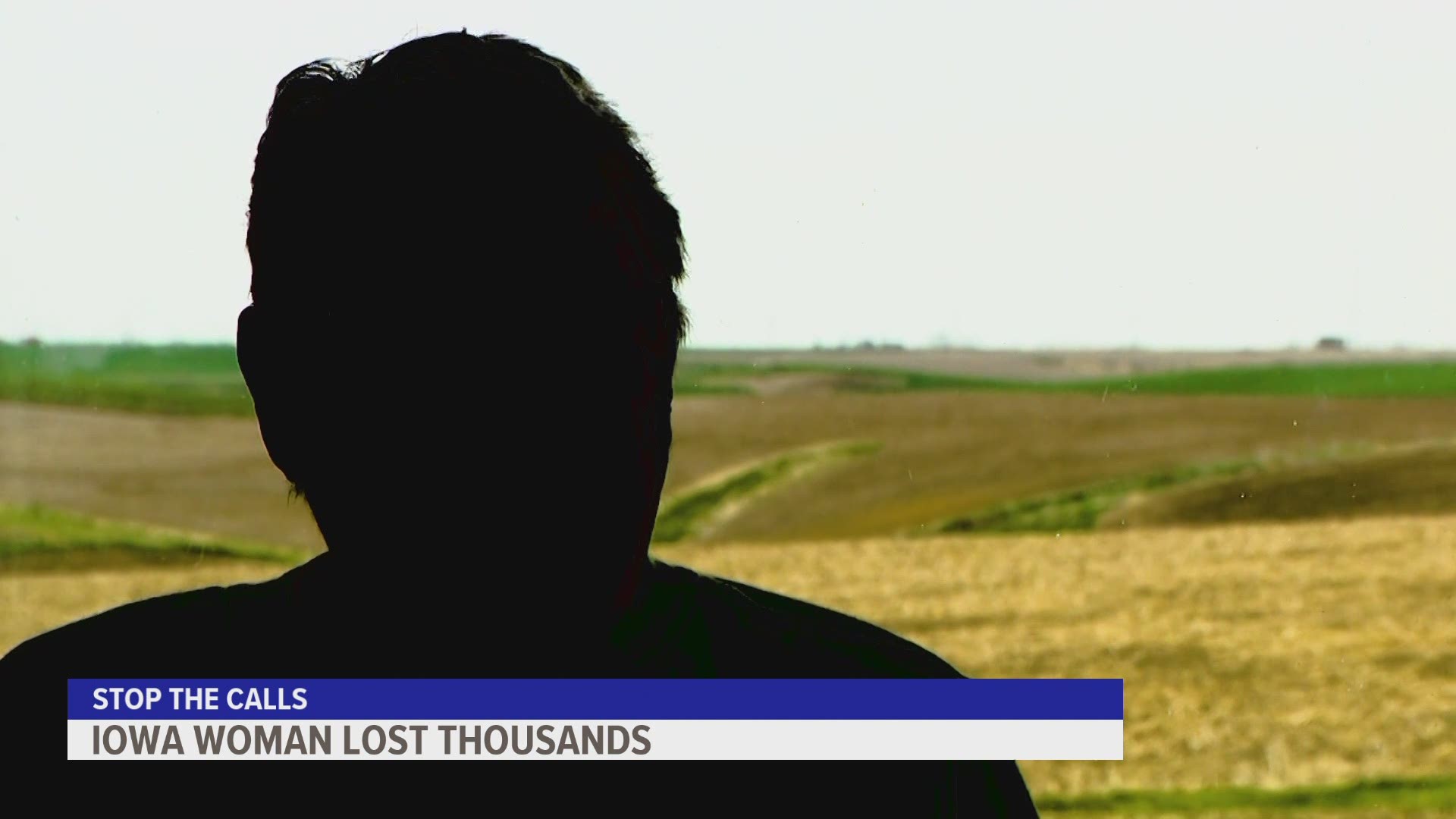 DES MOINES, Iowa — A new twist on an old scam has Iowa authorities and banks on high alert.

One Iowa woman, who we're calling Mary to protect her identity, fell victim to a new, far more dangerous version of the grandparent scam.

"This makes me very angry to think that I was gullible enough that I fell for it to start with,” Mary said.

It happened in February.

Mary said she woke up to a call from a man saying her grandson was in trouble.

"He told me that my grandson had been in an accident," Mary said. "He was driving and talking on the telephone, which was illegal, and he needed money to get bailed out or they would have him in jail by night."

Before she knew it, Mary was out the door.

"The fellow on the phone told me, ‘Do not talk to a soul,’” Mary said. “Every other sentence he'd mention, ‘Do not stop and talk to a soul.’ He had me scared."

Mary went to the bank, withdrew thousands of dollars, went back to her house and soon, a man came to pick up the money.

"He came to the door with a fuzzy black cap on, his face was covered, you could just barely see his eyes,” Mary said.

And then her money, totaling in the thousands, was gone.

Dangerous twist on an old scam

You may have heard of the grandparent scam; it's been around for a while.

Scammers call the elderly pretending to be their grandchild in trouble.

They say they need money to get bailed out of jail or pay hospital bills.

Mary fell victim to the latest twist on this scam, one that has the potential to be far more dangerous than ever before.

“We've been seeing where they are actually using a courier to go to your house and pick up the money from you after you've collected it from the bank,” Patrick Waymire said.

Waymire is the assistant director for the Division of Intelligence and Fusion Center for Iowa’s Department of Public Safety.

He’s leading the state’s investigation into this scam.

Waymire said scammers are using social media to find their targets. With a simple search, they can find phone numbers, addresses, names of grandchildren and other personal information.

"They'll try to find the victim through social media and get to know the person,” Waymire said.

In less than a year, the Iowa Department of Public Safety reports 29 Iowans have lost $500,000 to this scam.

Waymire said that figure could be much higher though since many victims don't come forward out of embarrassment.

"A lot of people will do not come forward," Waymire said. "Out of those 29 cases that we've had within the last eight or nine months, that might actually just be a small portion of all of the people that were scammed.”

Waymire says scammers are getting away with the crimes because they move quickly and only stay in one spot for a couple of days then move to a new county or state to avoid detection.

Waymire said it's tough to describe these scammers because of a wide range of nationalities involved. It appears the ring is focusing on the United States, but Waymire said through their investigation, they've had ties to other countries.

"By the time law enforcement finds out about it, they're already out of the state,” Waymire said.

Law enforcement is working with banks to be on the lookout for large withdrawals that may be out of the ordinary to hopefully stop the transaction before the scammers can get their hands on the money.

"Our job is to make sure that the customer is protected, that their money is protected,” said Christi McWilliams, assistant vice president and bank security officer at Bankers Trust.

RELATED: What you can do to stop robocalls

Get a call? Report it immediately

If you or someone you know has gotten a call like this, whether or not you gave any money, the police want you to report it immediately. Since scammers are only here for a short time, reports from the public are the only way they'll catch those responsible.

“My husband and I had farmed for over 50 years,” Mary said. “We raised a lot of livestock and farmed a lot of acres and then to have some guy come and take it away for nothing – it doesn’t seem fair at all.”

Police are asking the public to be aware whenever answering your phone and let your loved ones know about this new twist on the grandparent scam.

There are a few ways to protect yourself.

If someone is calling you saying they are related to you and are in trouble, ask a couple of questions only that person might know the answer to.

Make sure it's something you can’t find on social media.

Second, know that law enforcement will never pressure you to pay to get someone out of jail or the hospital.

You always have time to check in with other family members or hang up and call the jail or hospital yourself to do your own checking.