Ticketmaster offers concert refunds – but not all events are eligible

After a consumer backlash, the nation’s largest concert promoter changes its policies to expand refund options for events which have been postponed. 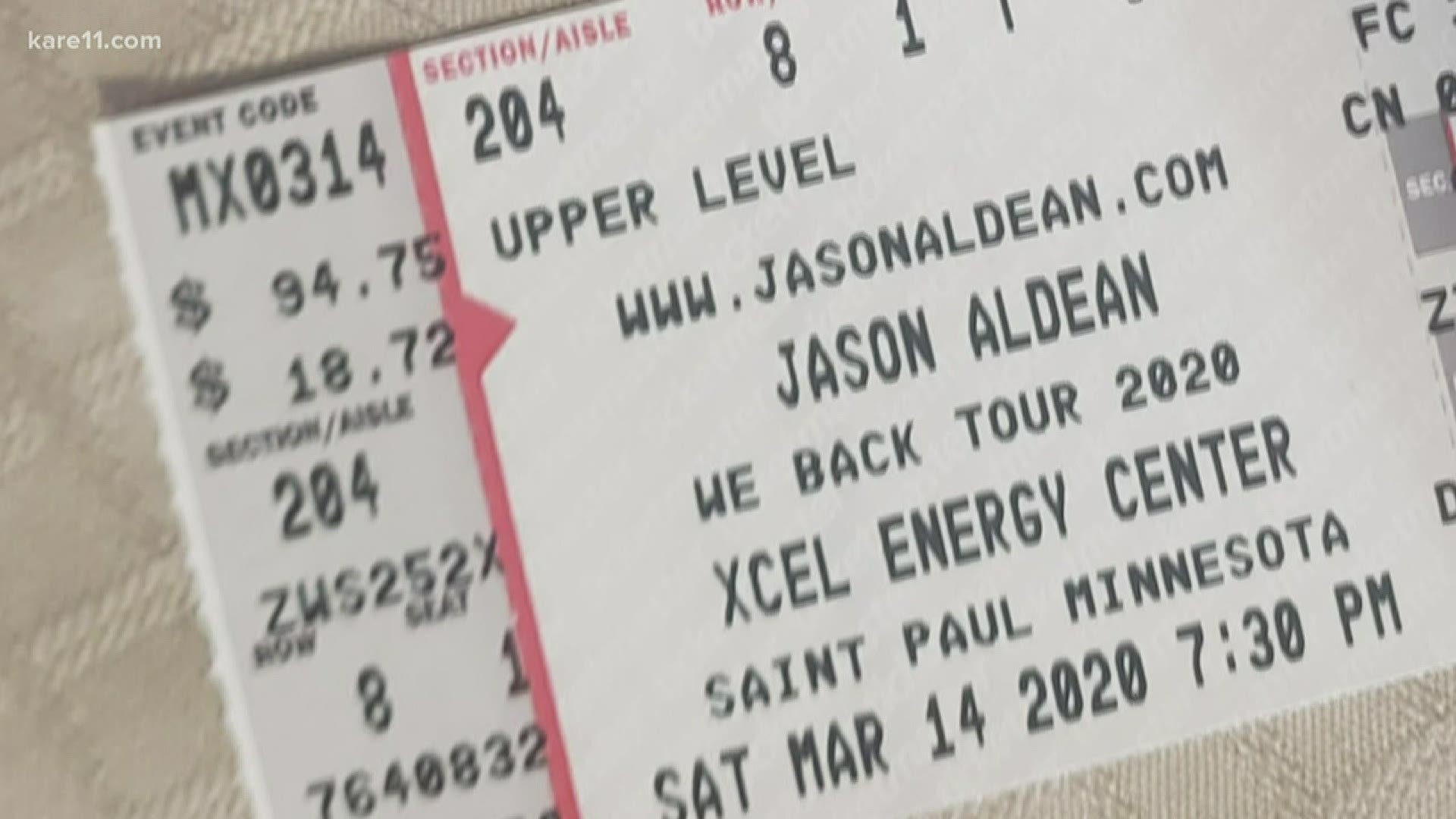 Relief is on the way for concert goers who have had events postponed or re-scheduled due to the coronavirus crisis.

The nation’s largest concert promoter is now offering refunds for many of those shows.

It’s an about-face for Live Nation, which also owns Ticketmaster. The company originally told customers it wouldn’t issue refunds until an event had been officially canceled.

Live Nation’s new policy offers options to either keep the tickets for the new date, get a refund, or get credit for future shows. Ticket holders who want refunds must request them within 30 days after a new date is announced.

The second largest promoter in the country, AEG Presents, has a similar policy.

Courtney and her husband had tickets for the Jason Aldean show at the Xcel Energy Center in St. Paul for March 14th. Because of COVID-19 it was re-scheduled for August 8th.

“Of course, the new date doesn’t work for us,” she said. She called Ticketmaster asking for her money back.

“I got an answer, but it wasn’t the answer I was looking for.” Ticketmaster originally refused a refund.

Under the new policy, though, the Jason Aldean show is one of the concerts now eligible for a refund because it is a Live Nation show.

But here is where it gets complicated.

Some events not covered

Those concerts, plays and sporting events are automatically eligible for refunds if they are canceled.

However, for postponed and re-scheduled shows, Ticketmaster’s policy is “issuing refunds for all clients that have approved of us doing so.”

By clients they mean the event organizers.

In a statement to KARE 11, Ticketmaster said “60% of the over 50,000 events that have been cancelled, postponed and rescheduled globally on the Ticketmaster platform have been authorized for refunds - and we have already returned over $400 million to fans.”

Other fans are waiting for more guidance.

Susan Volek bought six tickets to Disney’s Frozen at the Orpheum Theater. The show is postponed with no new date announced.

Although she purchased her tickets through Ticketmaster, the show is being presented by Hennepin Theatre Trust.

When Susan asked Ticketmaster for a refund, she says she was told that postponed events were not eligible. Under Ticketmaster’s policy the refund decision would be made by Hennepin Theatre Trust.

Their website says: “All tickets purchased for the original show date will be honored when the rescheduled date is announced. Refunds will not be available until the new date is confirmed.”

A spokesman previously told KARE 11 that customers wishing to receive refunds for Frozen should contact the box office directly.

But if any of these events were held in Wisconsin, refunds wouldn’t be an issue. Wisconsin has a law that generally requires event organizers to offer refunds if a show is postponed or re-scheduled.

Minnesota does not have a law protecting consumers in those cases.

KARE 11 reached out to the chairs of the Minnesota legislative committees that handle consumer protection. We were told no plans exist to change Minnesota law.

The Minnesota Wild has authorized Ticketmaster to offer refunds to customers even for games that may be rescheduled.

As for the Timberwolves, a spokesman tells KARE 11, “We are finalizing our refund policy and will be communicating to Wolves fans this week.”

The Twins website lists many options for fans based on whether they own season tickets or other ticket packages. The website says, “Fans who purchased single-game tickets for any of the Twins’ 16 impacted April home games at Target Field will automatically receive a credit on their account in the full amount paid, to be used toward future 2020 regular season home games; or, they can opt for a full refund of the amount paid.”

If you bought tickets on the secondary market through a seller like StubHub, you may be out of luck when it comes to refunds. Most are offering credit only for postponed or rescheduled events.

The Minnesota Attorney Generals office offers this advice for ticket holders: “If people want refunds for canceled or postponed shows, our office’s advice is first to dispute the charges for the tickets with their credit card company. If that doesn’t result in a refund, they could fill out a Consumer Assistance Request Form with our office and we would try to mediate the problem with the seller to get them a refund.”

If you have something you’d like us to investigate, send us an email at:  investigations@kare11.com