Fire Marshal says Ankeny apartment fire likely caused by cigarette; How you can help those displaced

Fire Marshal Craig Fraser told Local 5 a resident had put out their cigarette on a deck before the wind shifted and likely sparked the fire. 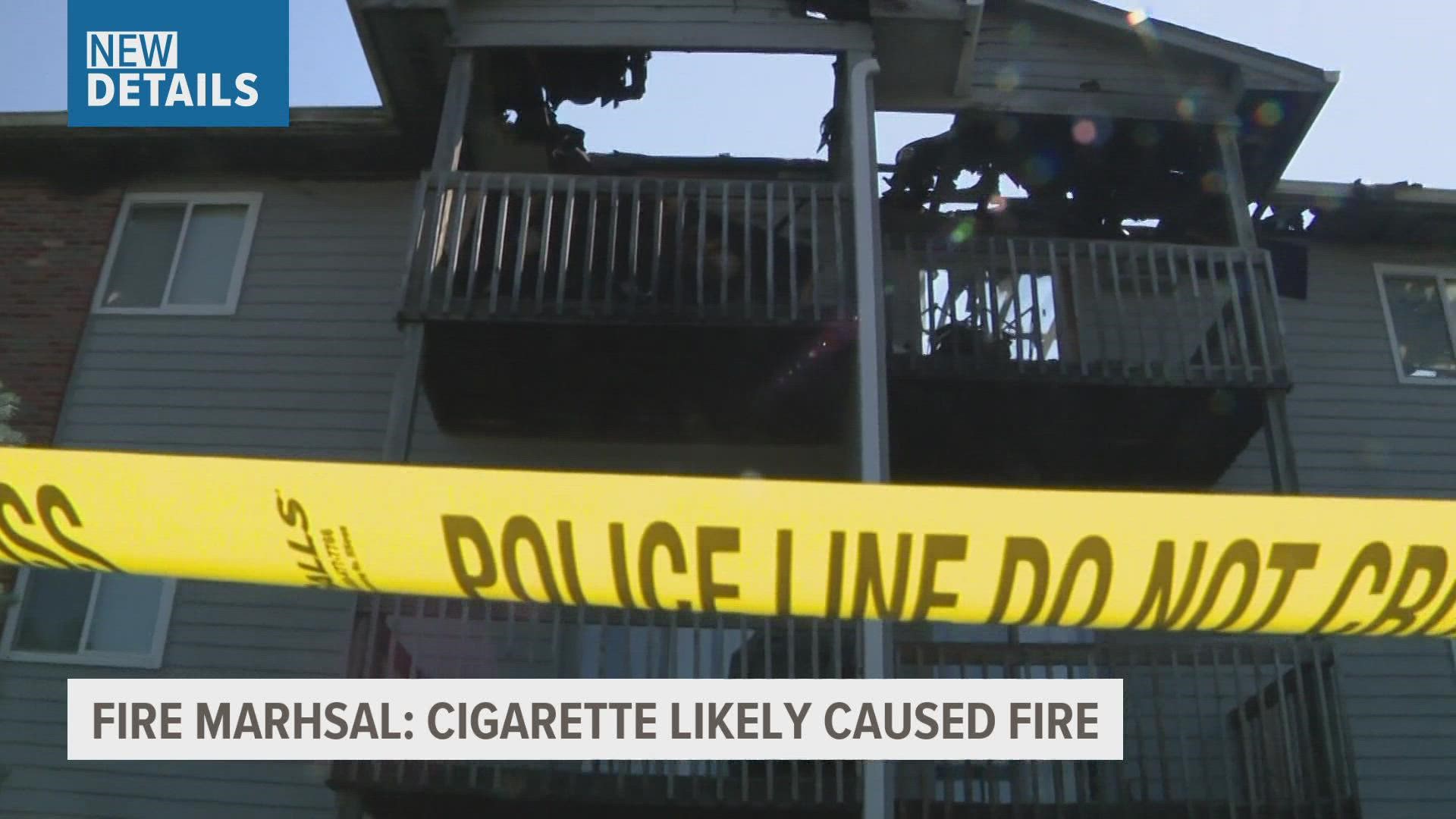 ANKENY, Iowa — You can help these residents by donating to the Ankeny Service Center. Click/tap here for more details.

Officials say the fire at an Ankeny apartment building was likely sparked by a put-out cigarette left on a deck Tuesday afternoon.

Ankeny Fire Marshal and Division Chief of Life Safety Craig Fraser told Local 5 a resident had put out the cigarette on the deck but then the wind shifted, sparking the fire. The flames then spread from the outside deck to the roof.

The entire building is damaged from both the fire and water, according to Fraser.

A tweet from Ankeny PD says officers and firefighters responded to 217 NE 12th St Pl. that afternoon. Authorities were called to the scene shortly before 3 p.m., according to Deputy Daniel Shellhaus with the Ankeny Fire Department.

Authorities conducted two searches to make sure everyone was evacuated from the building. Shellhaus said everyone appears to be fine at this time and no one was transported to the hospital.

"I got a call from my girlfriend in a panic," said Joseph Bleeker, who lived on the third floor of the building. "She had seen it [sic] on the news that an apartment was on fire, looked it up. It's our apartment, so I came straight here."

Bleeker said their pet guinea pig May was lost in the fire.

"Nobody was home to get her out, so that's where both of our hearts went first," he said.

RIGHT NOW: @AnkenyPolice, fire, and other agencies respond to a fire at Walnut Ridge Apartments, a 3-story complex built in 1988, with 48 units. pic.twitter.com/kn7QNgw1Bl

Now, Bleeker and his girlfriend are left to figure out what's next for them.

"It's obviously been a lot of adrenaline and fear from the initial reaction, but yeah, just got to get our bearings, get back to a sense of normal and making a plan of what's been lost, what has to get replaced, and how do we move forward," Bleeker said.

The importance of community rang true for Bleeker as he looked at first responders working on his home.

"I'm fortunate enough to have the privilege of a support network and people that look out for me," Bleeker said. "But I know I've got neighbors here who aren't quite so fortunate, so I'm grateful to people in Ankeny and the Greater Des Moines area who look out for each other."

The Red Cross was on-site working with property management to find out the next steps for those who lived in the building.

The Ankeny Service Center is also working to help the residents displaced by the fire. You can donate at their website or by sending personal care and household items.

Get to know Good Morning Iowa anchor Chenue Her