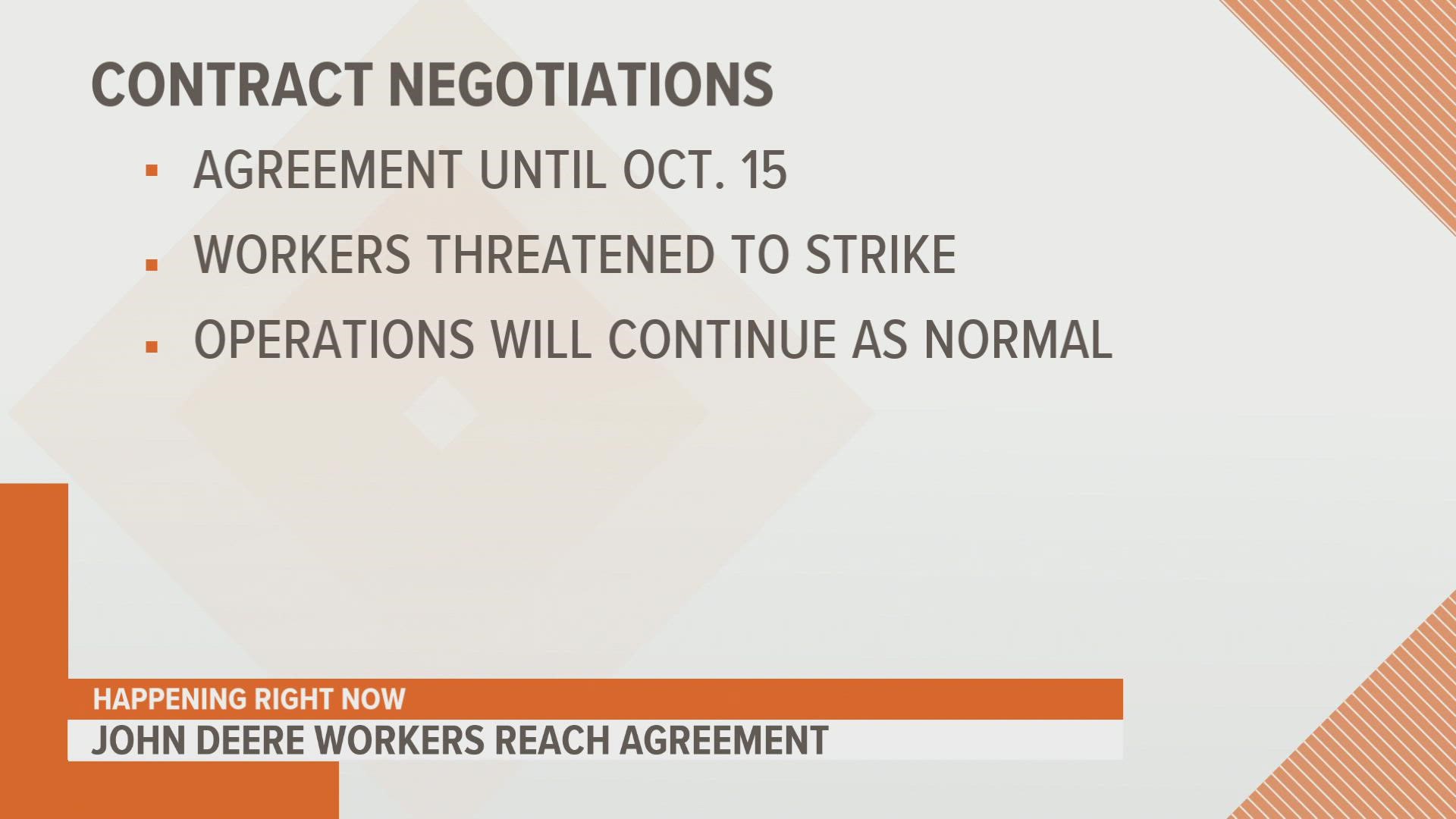 MOLINE, Ill. — UPDATE 10/7/2021: Starting at 5 a.m. Friday, Quad City UAW Members will get a look at the tentative contract agreement with John Deere.

The official vote for Local UAW Union 865 will happen Sunday at the TaxSlayer Center.

Information will be available in-person at the union hall in East Moline and on the UAW's website.

According to UAW Local 865 President David Thompson, Sunday's vote will be a majority vote. That means every union member can cast a vote if they are present. It also means one plant's employees cannot entirely pass or fail the agreement on its own.

Thompson said the tentative agreement will affect union workers in five states and 11 plant locations. Those include plants in Iowa and Illinois, plus plants in Kansas, Georgia and Colorado.

The union said in a statement, "Substantial hard fought gains and protections were achieved" by UAW negotiators.

Deere said the six weeks of negotiations will "provide employees opportunities to earn the best wages and most comprehensive benefits in the agriculture and construction industries."

Workers will review the agreement before a contract vote on Oct. 10.

The UAW said members can reach out to their UAW locals for more information about meetings and a date for a ratification vote.

The contract affects about 10,000 UAW workers at 10 Deere plants in Iowa, Illinois and Kansas. That includes the Quad City Deere plants.

ORIGINAL: John Deere contract negotiations with the U-A-W have officially been extended as discussion continues over their collective bargaining agreement.

"We are currently under an extension. Report to work as normal. the bargaining team continues to negotiate."

This news arrived moments after the current contract expired. Thursday's negotiations were meant to come to a tentative agreement in order to prevent employees from striking.

But, without an agreement and now an expired contract, John Deere workers may be facing the unknown.

Those involved with current negations are nine different union bargaining chairmen, the U-A-W’s vice president, John Deere’s executive board and local union presidents – though they did not have a vote.

John Deere released paperwork to their employees which stated:

"At the point in our negotiating a great deal of progress has been made in strengthening opportunities for employees to earn the best wages in the agriculture and construction industries, in addition we have made enormous headway in exploring a benefits package."