The city is bracing for future flooding and looking to install more protection as soon as possible. But they can't agree on how high that infrastructure needs to be. 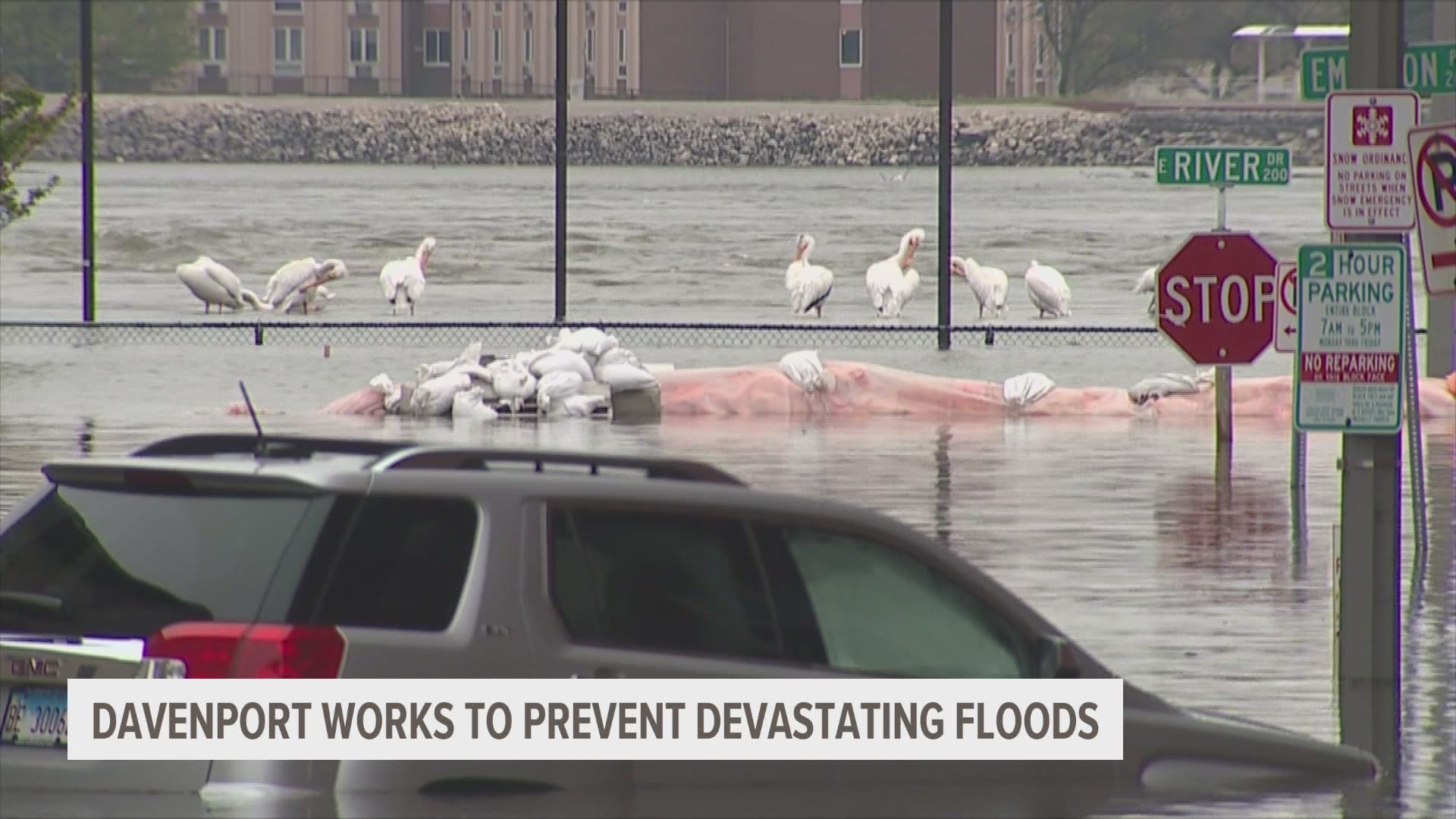 DAVENPORT, Iowa — It's hard not to forget the devastation Davenport has endured from flooding, and 2019's historic breach is no exception. That spring, the Mississippi River swelled to a record 22.6 feet, breaking through fortifications and sweeping through the city.

Now, Davenport will be building flood protection infrastructure, but before they can establish where it'll go - and what it'll be - they have to decide how high it's going to be built.

It's all part of a three-pronged approach to creating a flood plan, which the city is contracting out through H. R. Green Inc. from Cedar Rapids. That included a spring survey asking residents what sort of infrastructure they'd like to see.

Of those results, the company found Davenport citizens are in strong support of a permanent solution that are more lower maintenance, so they're reliable for the long-term. They also found a landform or berm was preferred to a flood wall where possible, because of "the opportunity for co-public benefits." And with the eminent danger of more frequent flooding in Davenport's future, the community indicated they want long-term solutions that will be critical in protecting existing businesses and inviting in future investments.

The city council was also asked what they wanted in flood protections and they showed unanimous support for at least a $5 million dollar local match in order to receive $20 million in federal funding, as well as slightly more limited support for "building big" with a $50 million match in order to receive $200 million in federal funds. They also indicated support for a cost share program when it comes to private property mitigation, and a slim majority want to divert current staff for maintenance of the flood infrastructure.

The council did differ from the community in having only a slim majority that favored permanent flood fighting as opposed to temporary.

But the real issue at Tuesday afternoon's council meeting was the height of the flood infrastructure, with some of the council members voting for a target of 22 feet, and others calling for something even larger.

Due to the council majority's favor of 22 feet, that is the height any plans proposed by H. R. Green Inc. will revolve around, with spokeswoman Teresa Stadelmann saying while the city is trying to think long-term, "We're starting from a certain point and we're trying to build up to higher and higher stages."

RELATED: The derecho could cost Iowa soybean farmers big in the 2021 harvest

But for Alderman Kyle Gripp, that height is worrying, considering the flood of 2019 would have breached any infrastructure of that peak. He cited numerous meetings the council has had with scientists and flood experts who unanimously announced Davenport could expect more severe and more frequent flooding in the future.

"We've already gotten two floods over 22 feet. We cannot build a protection to 22 feet. There are places along the riverfront where you know you need to build out higher than that," said Gripp.

According to the National Weather Service, when flood waters in Davenport rise above 22 feet, the water spills onto River Drive at the Village of East Davenport, crashing over seawalls at Lindsay Park. It also impacts the Centennial Bridge approach and 3rd Avenue at the John Deere Commons in Moline.

Flood levels of 24 feet would reach the main concourse of the River's Edge Center, as well as floor level of the Arconic plant in Riverdale.

And at 27 feet - a height scientists say Davenport will see within the next century - that water would be tall enough to reach the bottom of the Arsenal Bridge deck.

For comparison, a 29 foot flood would breach the flood walls and levees of East Moline, Rock Island and Bettendorf.

Davenport hopes to have their flood protection plans finalized by Thanksgiving, 2021.

The City of Davenport will receive $40.9M in COVID relief funding through the recently passed American Rescue Plan Act...