The chapter released a five-point list of demands on Tuesday morning. Most involve passing or voting down specific Iowa legislation. 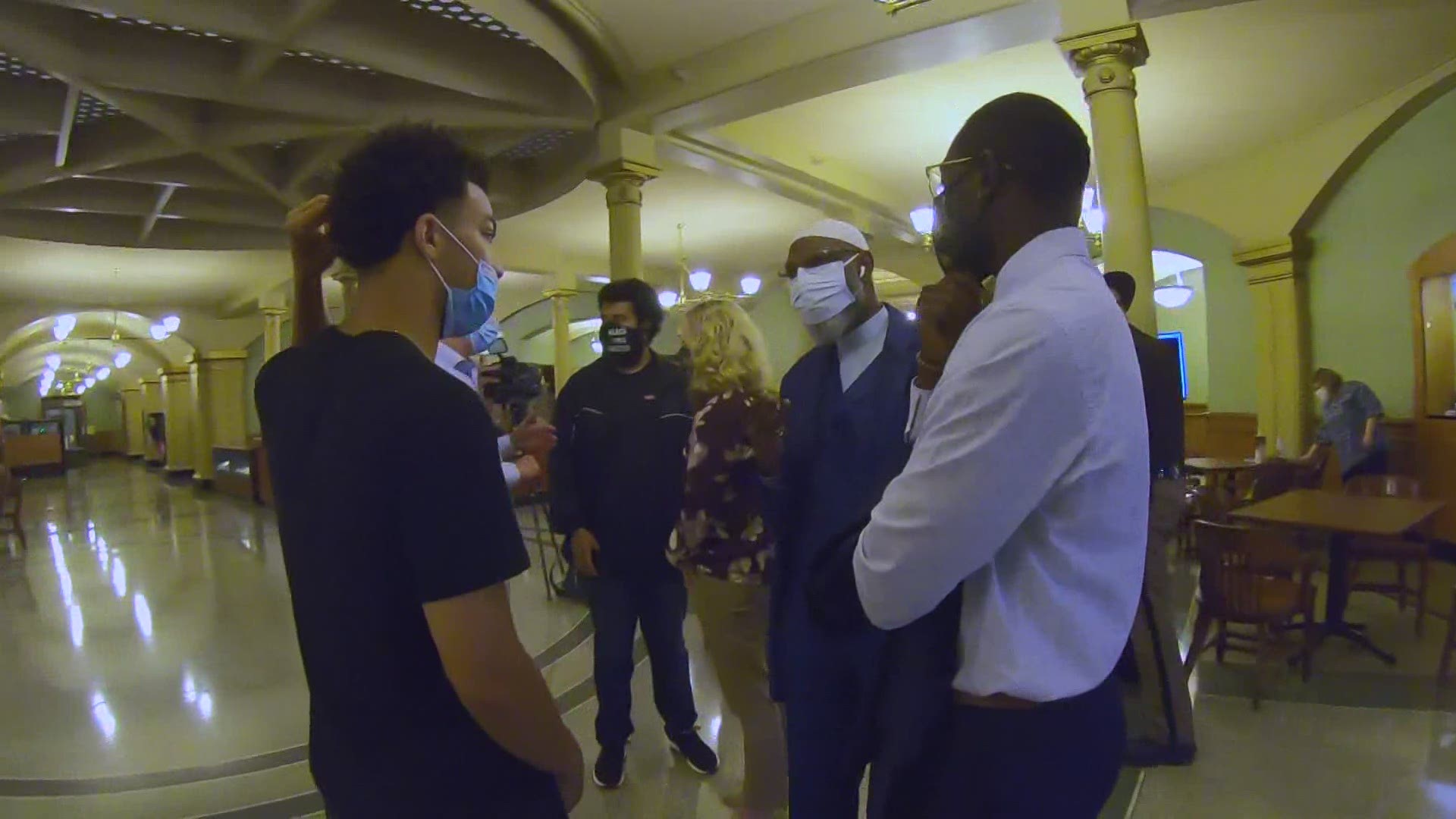 The demands all involve passing or voting down certain bills in the Iowa Legislature, plus demanding Gov. Kim Reynolds to pass an executive order to restore felons' right to vote.

The list comes one day after the vote on anti-racial profiling ordinance in Des Moines was pushed back amid public backlash.

The NAACP and Iowa Citizens for Community Improvement criticized the ordinance for being "weak" and throwing out demands that were initially agreed upon.

The chapter marched to the Iowa State Capitol to meet with legislative leaders.

While the Iowa Senate had adjourned for the day, the House still had two committee meetings scheduled for later Tuesday afternoon, according to the Iowa Legislature website.

Eventually, members of Black Lives Matter made it into the Capitol to talk with legislators and legislative candidates.

"If she really wanted to show respect to George Floyd and the movement that we are trying to do, she would take up some of this legislation and actually act on some of these racial justice bills," said Cavil.

Des Moines BLM outlined a 5-point list of demands for the state, including decriminalizing marijuana and signing an executive order immediately restoring voting rights to all felons who have served their sentences.

"No matter what crime you committed, if you served your time, you earned your freedom. And we believe that the right to vote is an aspect of freedom," said Bruce.

Friday, the Iowa Senate passed and Reynolds signed a bill restoring voting rights to some felons. But it's still a long way off--and it includes exemptions that do not meet what Des Moines BLM says would bring fairness to the black community. Furthermore, the soonest the constitutional amendment could be passed, after a public vote, would be November 2021.

"That's why we want the executive order," said Bruce. "It could be done immediately, it can be done without the legislative session, and it can serve as a stopgap until we get the constitutional crisis figured out."

Since they said they still couldn't reach Reynolds Tuesday in the Capitol lobby, they spoke with four legislators who committed to bringing their demands to her desk.

"We know that our demands are going to be at the governor's table. And the ball is in her court," Bruce said.

The bill doesn't outright legalize corporal punishment, but defines it as "the intentional physical punishment of a student."

The bill states: "An employee’s physical contact with the body of a student shall not be considered corporal punishment if, in the opinion of a reasonable person at the time of the incident, it is reasonable and necessary under the circumstances and is not designed or intended to cause pain or if the employee uses reasonable force, as defined under section 704.1, for the protection of the employee, the student, or other students; to obtain the possession of a weapon or other dangerous object within a student's control; or for the protection of property."

In short, a school employee can physically restrain a student if they believe the student could harm themselves, others or property with or without the use of a weapon.

Force used during the incident must be "reasonable and necessary."

Read the complete bill below:

2. Iowa State Legislature supports and passes the "Plan for a More Perfect Union"

The "More Perfect Union" plan was unveiled by Iowa lawmakers last Thursday. In it are three proposals:

READ MORE: Prevention plan aimed at conflicts between police and Iowan's being discussed

3. Iowa State Legislature decriminalizes cannabis across the state of Iowa and expunges the records of all those charged with cannabis-related offenses

There aren't any bills on either of these topics currently in legislature, according to the Legislative Services Agency.

Gov. Kim Reynolds has been against previous cannabis legislation that would allow more THC content in medical marijuana, so it's unlikely any change will happen this year.

Local 5 reached out to the governor's office for a comment. Communications Director Pat Garrett provided the following statement:

Gov. Reynolds is committed to taking action, and building on efforts from last year. She is continuing to meet with legislators and believes that the conversations happening right now will result in Republicans and Democrats coming together to create meaningful change.

Under current Iowa Code, detention is defined as "the temporary care of a child in a physically restricting facility designed to ensure the continued custody of the child at any point between the child’s initial contact with the juvenile authorities and the final disposition of the child’s case."

Funds allocated to a juvenile detention home depend on a county's board of supervisors. That's according to Iowa Code 232.142, which you can read below.

It says in part: "Expenses for providing and maintaining a multicounty home shall be paid by the counties participating in a manner to be determined by the boards of supervisors."

Financial aid can also be provided by the state.

"Aid paid by the state shall be at least ten percent and not more than fifty percent of the total cost of the establishment, improvements, operation, and maintenance of the home," according to Iowa Code.

5. Gov. Kim Reynolds passes an executive order immediately reinstating the voting rights of all Iowans with felony charges who have served their sentences

According to the governor's office, Reynolds has proposed an amendment to Iowa's constitution to grant voting rights to felons as well as allow them to hold public office.

The amendment would need to pass both legislative chambers before being put on the ballot for Iowans to vote on.

For now, Iowans can apply to restore their voting rights.

SF 2348 is an enrolled bill that relates to the restoration of voting rights to certain convicted persons. It also includes effective date provisions.

In short, the bill will allow a felon to vote after they've completed parole/probation, paid restitution and paid all of their court fines and fees.

The Iowa Senate passed the bill earlier this session and the House passed it last week. Gov. Reynolds signed it last Thursday.

An email from Sen. Claire Celsi, D-West Des Moines, details another bill, HJR 14, which is the Constitutional Amendment that will allow felons to vote.

If signed into law, HJR 14 would remove the state's "infamous crime" clause and make it possible for felons to vote without Reynolds' executive order.

The bill was recommended for passage on Monday.

Celsi said both of these bills would go into effect at the same time, so felons with fines will still not be able to vote. They could file a request to get their rights back, like they do currently do.

"The court said that disallowing people to vote because they can't afford to pay their fines is tantamount to a poll tax," an email from Celsi reads.

Celsi said the soonest that this could become a law would be during the November 2021 elections.

"I think people are getting the impression that the law will become effective immediately. That is just not true," Celsi concluded.