Some Des Moines residents snapped at the Council Monday night following the promotion of an officer that BLM activists say abused his powers as an officer. 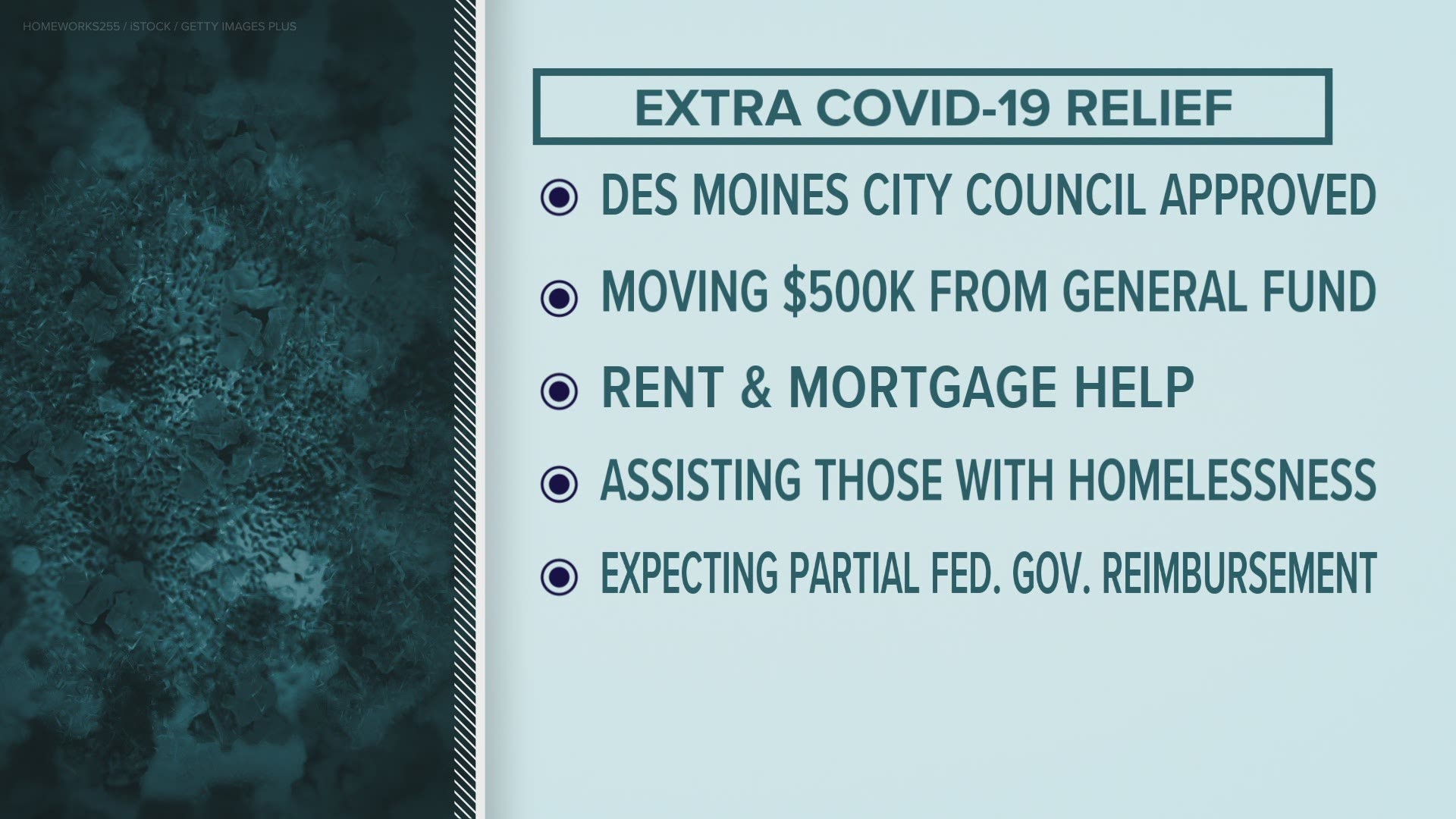 DES MOINES, Iowa — Council members voted to allocate $500,000 of the City's general fund to provide additional COVID-19 relief for residents Monday night. These funds will go towards rental and mortgage assistance as well as aid those experiencing homelessness.

"We continue to look for the most effective ways to support the residents of Des Moines during these difficult times,” Mayor Frank Cownie said. “The approval of these reallocated funds will help alleviate the burden many residents have found themselves and their families in during this challenging year.”

The City anticipates a portion of these funds will be reimbursed by the Federal Government, however, the exact amount is unknown as of Monday night. The funds will go to IMPACT Community Action Partnership and HOME, INC.

Monday evening, Des Moines activists took to the City Council meeting to protest the promotion of a Des Moines Police Department officer and police brutality within the department.

A TikTok video posted to Twitter depicts officers attempting to arrest an unknown number of people in an elevator in downtown Des Moines in June. The tweet says the people in the elevator were attempting to go home after protesting police brutality following the killing of George Floyd in Minneapolis.

One of the officers in the video is Brian Foster, whom of which the Des Moines Black Liberation Movement (BLM) chapter is calling on to be fired from the department.

At the start of the meeting, Council members were called to approve the consent agenda for the evening. The tension was already in the air when the first speaker asked for the item on Foster's promotion to be removed from the agenda.

Our statement on the promotion of @DMPolice officer Brian Foster.

The item was not removed because it isn't the Council's decision to promote an officer. City Manager Scott Sanders then spoke up on the issue.

"Item 29 is an item to receive a report from our Des Moines Civil Service Commission, the commission that establishes the guidelines for promotions as required by the Iowa Code," Sanders explained. "This agenda item simply acknowledges that the Commission has certified the attached promotions."

"We're just receiving this form then, we really have no authority for promotion, is that correct?" Mayor Cownie asked. Sanders said yes, and the item remained.

This didn't mean activists were done.

Throughout the rest of the meeting, activists would speak up on police brutalities within the DMPD whenever they had a chance. Those registered to speak during the public comment period had subjects regarding "injustice in Des Moines" or "in support of Des Moines Police Department ceasing to exist."

Most of the speakers would continue to speak on the same subject as their predecessor, speaking on instances of police brutality and settlements the City has paid for.

One example was Lonnie Porter, who received a $25,000 settlement after being unlawfully pulled over in 2016. Another example is Kimberly Williams, who was awarded $75,000 by the City after an officer pepper sprayed her 17-year-old daughter.

Later on in the meeting, Council members were discussing 2021 traffic signal replacement contract when BLM activist Jaylen Cavil spoke on his experience of being pulled over as a Black man.

"One important note about traffic signals and their use is that they're actually used a lot of times to racially profile and pretextually stop Black motorists in the City of Des Moines," Cavil said.

"One time I was actually racially profiled because of a traffic signal. It was about a year ago, and a cop was was following me. Followed me for about five minutes through some Southside streets, all the way around to my house," he continued.

"There's a history of pretextual stops and racial discrimination in the Des Moines Police Department," Cavil said right before his mic was cut.

Later on, another activist spoke up for Cavil. Emily Ewing picked up where he left off:

"These stories we've shared of our community members live being permanently damaged are not trivial anecdotes to go in one ear and out the other. You need to pass a complete ban on pretextual stops so that Black folks in Des Moines community won't continue to be subjected to their racist past times of bored and hyper aggressive Des Moines Police officers."