The Helmsley Charitable Trust has awarded the State of Iowa a $10.1 million grant to provide the state with more than 4,000 AEDs. 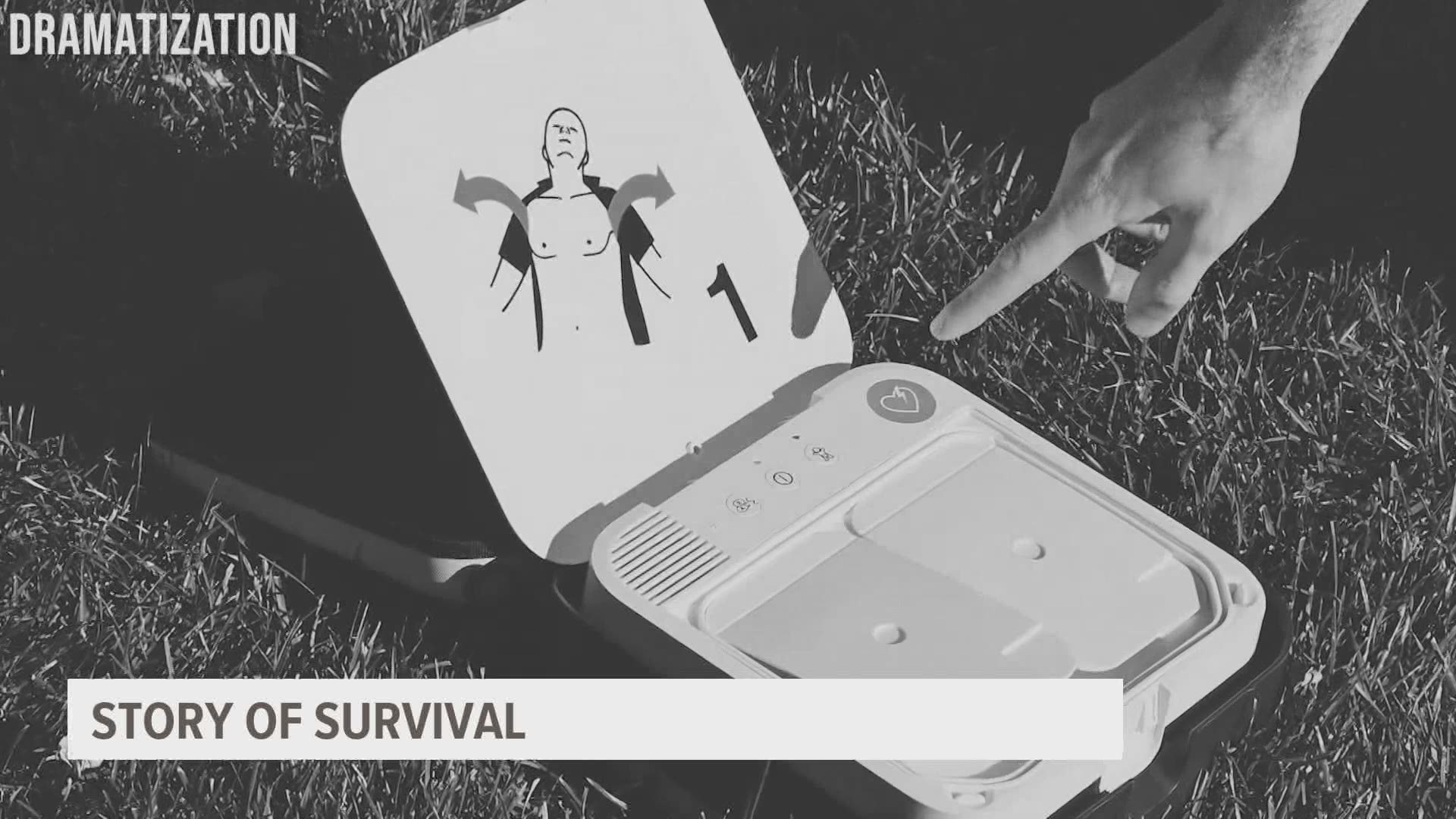 IOWA, USA — As the month of February and American Heart Month wrap up, Local 5 is sharing a story of survival that also has an important message of education and being in the right place at the right time.

It was an average day in October when Chad Coburn started to feel some pain in his elbows that eventually grew into something very serious.

“Went to walk out of the kitchen and brace myself on the countertop and fell over backwards,” Chad recalled. "At that point is when my heart stopped. We didn't know at the time I was having a full-blown heart attack.”

Chad's wife, Crystal, and 13-year-old son saw it happen. Because of CPR training at work, Crystal immediately sprung into action calling 9-1-1, handing the phone to her son, and began chest compressions.

The family lives in rural Poweshiek county and it can take upwards of 20 minutes for first responders to arrive at his location. Out of sheer luck, Iowa County Deputy Mark Tiedt, happened to be driving by and heard the 9-1-1 emergency.

“[He] came inside, saw what I looked like and he was like Chad you were dead. There was no doubt about it, you were dead,” Chad said.

Thankfully the deputy had an AED in his vehicle and was able to administer a shock 8 minutes into the heart attack. A few minutes later after a Poweshiek deputy continued CPR Chad's heart started beating.

“The AED was one of those tools that gave me another opportunity at life."

But it wasn't until after becoming a heart attack survivor that Chad learned that his own Poweshiek County deputies didn’t have AED units in their vehicles. This quickly became a passion project for Chad’s family. Through some research they came across the Helmsley Charitable Trust.

The Helmsley Charitable Trust has awarded the Iowa Department of Public Health Bureau of Emergency and Trauma Services a $10.1 million grant to provide law enforcement officials and first responders throughout the state with more than 4,000 AED's.

Chad's passion has now shifted so the county has adequate funds to support the AED's they now have in their possession.

“That tool just gives someone else another chance at life, you know in a dire situation,” Chad said.

His family continues to stress the importance of education. Make sure to take the time to learn CPR any way that you can, there are even online courses available. And check with your employer to see if they have an AED on site. It could save your life.

Credit: Chad Coburn
Chad Coburn and his sister continue to raise funds to support the AED's in their county

RELATED: US has 'lowest flu season' on record during COVID pandemic