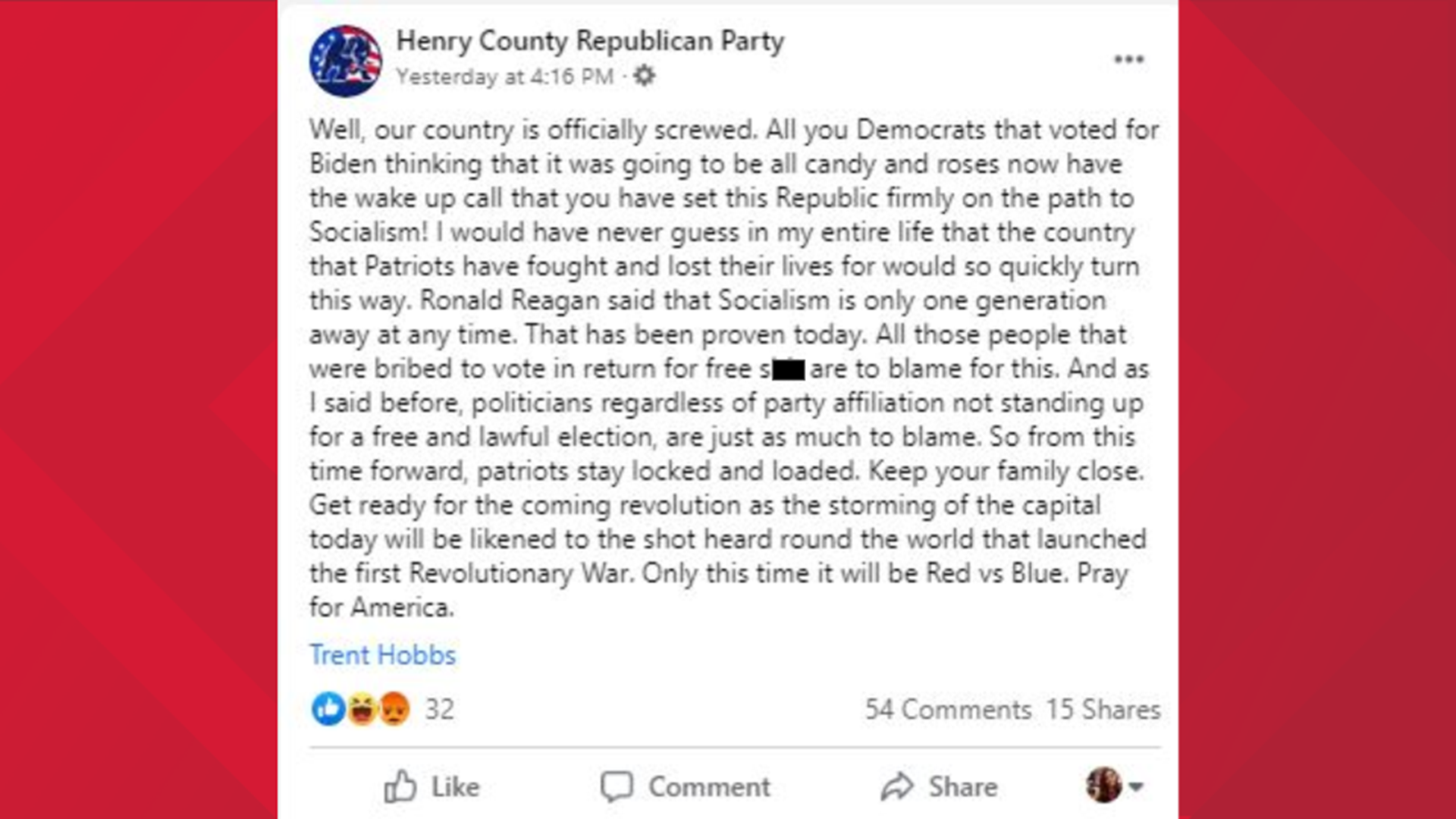 HENRY COUNTY, Iowa — The now-former chairman of the Henry County Republican Party who was responsible a since-deleted post that encouraged others to stay "locked and loaded" and "keep your family close" following Wednesday's riot at the U.S. Capitol, has now been placed on administrative leave from his position as a custodian at the Mount Pleasant Community School District.

According to the superintendent, the district was made aware of the social media post and has since begun an intitial investigation. They're handling it as a personnel matter.

In the meantime, Hobbs has been placed on paid administrative leave. He has worked at the district for six years.

Trent Hobbs posted the message to Facebook at 4:16 p.m. on Jan. 6, just hours after a massive mob stormed the capitol. The post included conspiracies, alleging that some voters were bribed to vote in return for free things.

"Everything has been blown out of proportion. My post was taken entirely the wrong way, and I am sorry to those who didn’t understand that it is me being a modern day Paul Revere, attempting to wake the sleeping masses," he wrote. "I do not condone violence and the activities at the Capitol were horrible and should never have happened. The use of the term 'locked and loaded' is not a threat of violence, but a military readiness term to be prepared for the any trouble. This post was made in frustration over the way some of the elected officials in this country reacted to the election. I am sorry for posting out of frustration and it has caused me a lot of trouble, including the possible loss of employment. I am sorry for posting my feelings but it cannot be undone."

"The governor was very clear this morning where she stands on this kind of sentiment," said Pat Garrett, Reynolds' communications director. "It's unacceptable and uncalled for."

Earlier Thursday, Reynolds met with press members over Zoom ahead of the 2021 legislative session.

"I want to take this opportunity to again just condemn the actions of those who stormed our nation's Capitol and chose to incite violence yesterday, it's unacceptable and they should be prosecuted to the full extent," Reynolds said.

Republican Sen. Joni Ernst also condemned the post. In a statement from her office, "She has said it is time to tone down the rhetoric and bring our nation together."

"Sen. Grassley condemns this post and rhetoric like it. Everyone, especially after what we’ve seen this week, needs to be responsible with their words," a spokesperson for his office said. "Taking the post down was the right decision."

The full text of the post is detailed below:

"Well, our country is officially screwed. All you Democrats that voted for Biden thinking that was going to be all candy and roses now have the wake up call that you have set this Republic firmly on the path to Socialism!

I would have never guess in my entire life that the country that Patriots have fought and lost their lives for would so quickly turn this way. Ronald Reagan said that Socialism is only one generation away at any time. That has been proven today.

All those people that were bribed to vote in return for free s*** are to blame for this. And as I said before, politicians regardless of party affiliation not standing up for a free and lawful election, are just as much to blame.

So from this time forward, patriots stay locked and loaded. Keep your family close. Get ready for the coming revolution as the storming of the capital today will be likened to the shot heard round the world that launched the Revolutionary War.

Only this time it will be Red vs Blue. Pray for America.