From cold cases, to recent disappearances: How Iowa maintains their database of missing persons

Iowa is only one of a handful of states that make public their database of missing persons in a wide variety of categories. 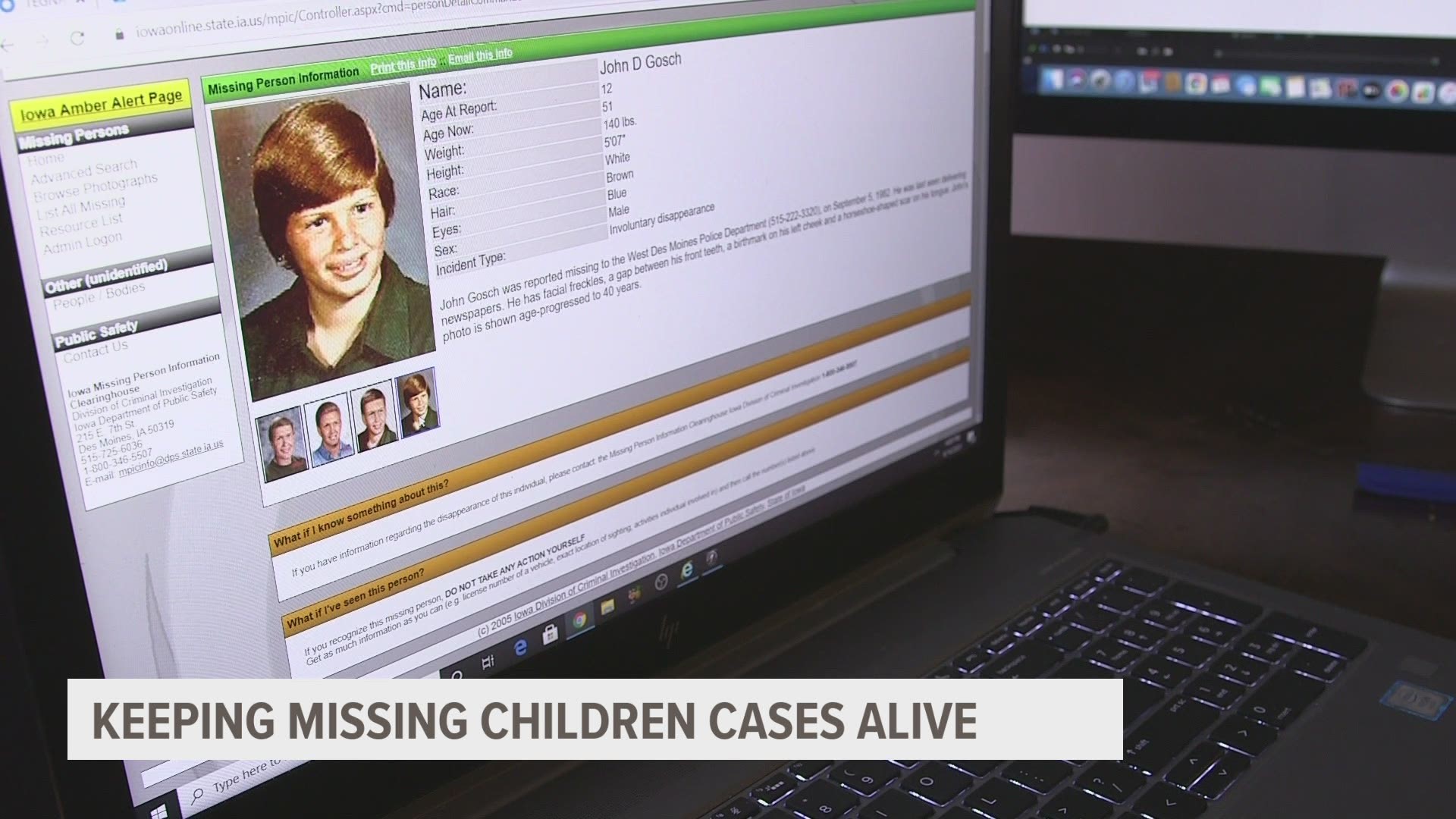 However, Medina Rahmanovic, who manages the state database, says it changes day-to-day.

Rahmanovic said most juveniles who are reported missing normally return within a few days, so the number is constantly in flux. But some cases remain there for decades.

Iowa is one of just a handful of states that currently publicly lists all missing persons, and the number can seem higher than you might expect.

That's because they even include cold cases on their website, and have a wide variety of categories that they report, from "involuntary" and "endangered," to "disability," to "familial kidnap". (Full description of categories below)

On the website, you'll find names of people who went missing as recently as this year and as old as decades ago, such as Johnny Gosch.

John Bischoff, the VP of the Missing Children Division at the National Center for Missing and Exploited Children, said 90% of missing children cases are typically endangered runaway. He said 7% of cases are familial abduction, and only 1% of situations involve a child being taken by a complete stranger.

"These children may not have run away," said Bischoff. "They may have been coerced."

While web-based databases and pictures shared on social media continue to be important tools in helping return a child home, Bischoff said printed posters are still very effective and something they continue to provide to local and state agencies.

"They do a wonderful job of keeping that image of the child out there," said Bischoff. "Unless you’re directly tied to these cases, a week goes by, a month goes by -- you might not even realize a child is still missing. But having a poster out there refreshes the community’s memory."

The term “missing” includes all reasons that a person may have disappeared.  The missing person criteria outlined by the Iowa Department of Public Safety include the following:

o   Involuntary:  a person of any age who is missing under circumstances indicating the disappearance was not voluntary (i.e., abduction or kidnapping).

o   Endangered:  A person of any age who is missing under circumstances indicating that his/her physical safety is in danger.

o   Disability:  A person of any age who is missing and under proven physical/mental disability or is senile, thereby subjecting himself/herself or others to personal and immediate danger.

o   Catastrophe:  A person of any age who is missing after a catastrophe, (i.e., victims of disasters, such as tornadoes, etc.)

o   Familial Kidnap: A minor who is missing and has been declared unemancipated as defined by the laws of his/her state of residence and who has been abducted by non-custodial parent or relative.

o   Lost or Wandered Away:  A minor who is lost or has wandered away. This category does not include those persons taken by force or runaways.

o   Juvenile: A person who is missing and not declared emancipated as defined by the laws of his/her state of residence and does not meet any of the entry criteria for disability, endangered, involuntary, catastrophe victim, parental abduction, or lost or wandered away.

o   Adult:  A person not meeting the criteria for entry in any other category who is missing and 1) for whom there is a reasonable concern for his/her safety or 2) a person who is under age 21 and declared emancipated by the laws of the state when no other criteria for disability, endangered, involuntary or catastrophe victim apply.

RELATED: 25 years and still missing: What happened to Jodi Huisentruit?