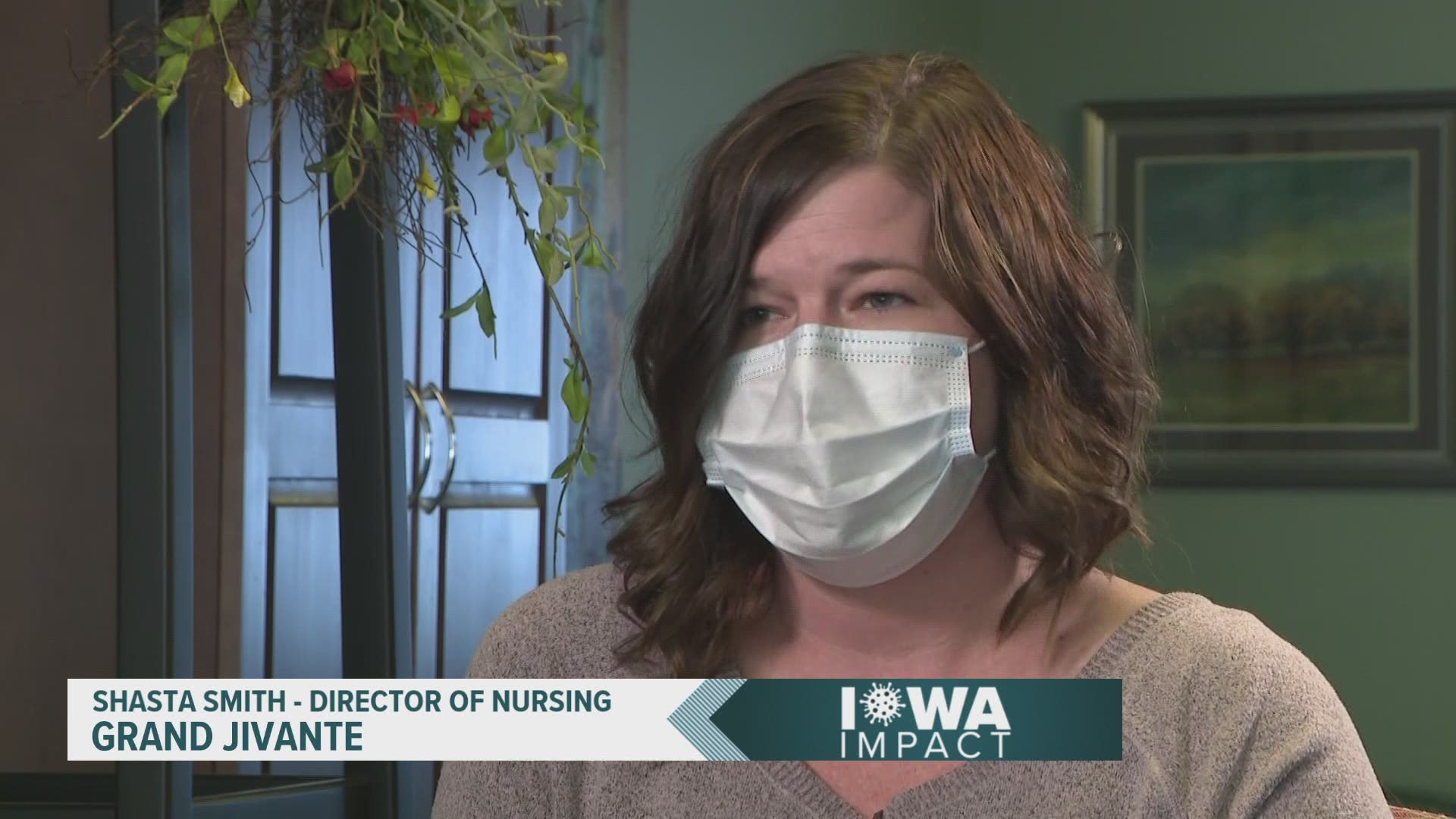 ACKLEY, Iowa — Like many of us a year ago, no one quite knew what to think about the Covid 19 pandemic. For the director of nursing at Grand Jivante in Ackley, Iowa, they were receiving contradicting regulations along with guidelines on visitations to their long term care facility.

“A lot of times we didn't know one way from another, what was still in effect, because they were just changing them that fast as they learned more about the virus,” states Shasta Smith, Director of Nursing at Grand JiVante.

The situation escalated quickly when Covid entered the building on October 28th. They immediately moved residents to a specific Covid ward in the building and put nurse management on them because they didn’t have any spare nurses at the time. Despite separating residents and constantly cleaning the 95,000 square foot building, the virus continued to spread.

“You pretty much walked around with bleach wipes attached to you,” states Shasta Smith.

Then more and more employees started contracting Covid and staffing became nearly impossible. Just when Director of Nursing, Shasta Smith thought she had things under control, something would change. And then Shasta learned she had contracted the virus.

“I was frustrated, super frustrated, because when I got Covid, we already had two nurse managers out that left us with one,” Shasta remembers.

35 out of the 46 residents ended up contracting Covid and a third of the workforce, including three nurse managers. But in the end, they only ended up losing one resident.

“Our staff was amazing. Amazing. Everybody chipped in everywhere, everybody. I had pregnant staff, I had autoimmune staff that were literally like, put me where you need me,” Shasta Smith recalls.

During the outbreak Grand JiVante decided to be very transparent about what was happening in the building by posting updates on social media. They made sure they were available to phone calls so family members knew everything that was going on in the building and with their loved ones.

After successfully overcoming a Covid outbreak and continuing to navigate what the new normal looks like, the staff at Grand JiVante is still seeking guidance on what the next steps will be for visitations.

“We're kind of frustrated right now, as we haven't seen any new guidelines since the Covid vaccine came out, we were kind of hoping that would open us up a little bit,” Director of Nursing, Shasta Smith goes on to say, “depression has definitely settled in.”

The team at Grand JiVante continues to do the best they can to accommodate guidelines and the needs of families. They are conducting ‘Compassion Visits’ where supervised meetings can occur between family members after going through a screening process.

But the number one priority at Grand JiVante is taking care of their residents.

“We want you to be able to hug them. It really does come down to patience, we are following guidelines,” states Shasta Smith.