'2020's been a struggle': Farmer worries last week's rain will cause derecho-damaged corn to mold

Farmers said the rain was needed for a healthy yield next year, but it likely hurt the current crop that still needs harvested. 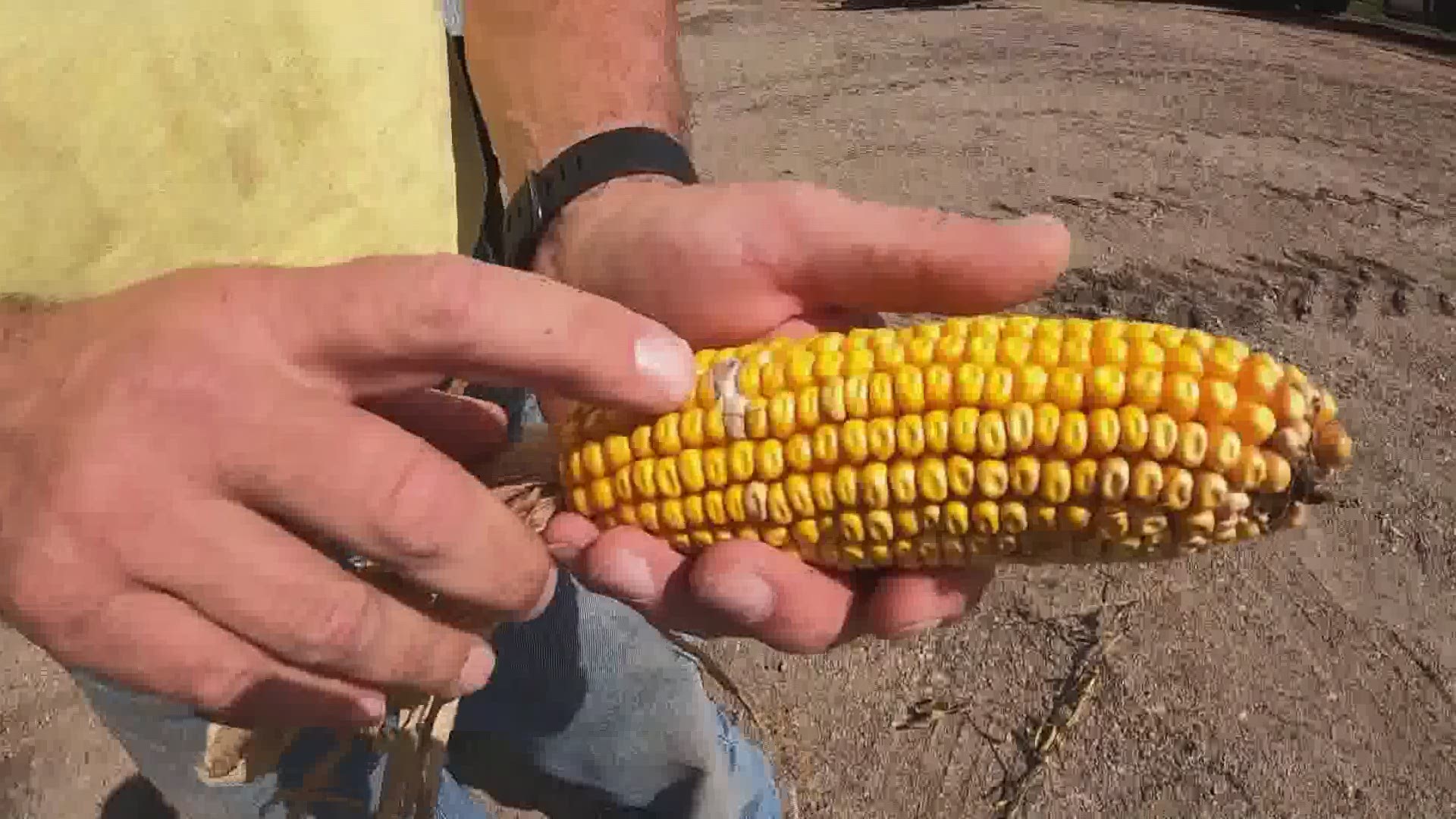 RIPPEY, Iowa — Last week's rain was much-needed for Iowa farmers, but while it'll likely help in the long run, it could pose problems for some of this year's crop.

"Long term, we need a lot of rain before next year because our subsoil is totally depleted. We're going to have to have a lot of rain or next growing season could be a big issue for us again."

Bardole, past president of the Iowa Soybean Association, had many of his cornfields flattened in the Aug. 10 wind storm.

Hail in that storm damaged some of his crops, causing it to mold.

Now, with dewy mornings and the roughly 3 inches of rain that fell last week, the mold problem will likely get worse since the crop is laying flat and can't dry out.

Bardole said he's worried the corn he is able to pick up with the combines will be ruined by spoiled ears.

"If you put that 10% in with the other 90% of good kernels, it's still unsellable," Bardole said. "There will be no value in that."

The rain was needed, but Bardole said it will likely hurt what's left of this year's crop for farmers hit hard by the derecho.

"I wish things looked different standing here on my farm, but they don't," Bardole said.

Crop insurance only covers so much

Bardole estimated he'll end up harvesting half his corn crop and even less of his soybeans.

"Probably half of the soybeans we'll run a combine over, but instead of getting 70 bushels an acre, we may only be getting 10 to 15," Bardole said. "So you have all the expense of harvest and you really won't have much to get out of it."

After factoring in crop insurance, Bardole estimated he'll still lose between $200-$300 an acre.

"2020's been a struggle," Bardole said. "Right from the beginning with COVID and what it did to the markets."

A rough start to the year was followed by seemingly good news.

Bardole was able to plant his crop without a break, but after planting, it would be a month until rain fell on his fields again.

"That gave us some struggles with emergence because the top was dry," Bardole said. "Up until the end of July, we had four inches of rain all season. Things were looking pretty bleak."

Early August, things started to look better, but then the derecho hit.

"We got a little shot of rain and things green back up," Bardole said. "Actually, after it pollinated we were looking and, boy, we had a pretty decent crop. Then the derecho went through and we didn't feel good about it anymore. Ever since then it's been a struggle."

Bardole said it's been a headache dealing with insurance adjusters.

"The adjuster is coming back again tomorrow to look again with this rain," Bardole said. "It's been a struggle. A lot of different struggles than we've had the last few years. The last few years have been a real struggle also. It just keeps finding new ways to stress you out, I guess."

A silver lining according to Bardole; the Trump administration's decision to throw out small refinery waiver applications. The RFS waivers would have exempt a group of oil refiners from having to blend the required amounts of ethanol into the gasoline they make.

"It's a lot easier to deal with weather problems than it is with trade or the U.S. government making rules, like with the RFS," Bardole said. "That kind of stuff gets frustrating. Bad weather, we don't like it, but it happens. Hopefully next year, we'll have a lot easier season than we did this year."

The state's weekly crop report shows less than 50% of Iowa's corn and soybean crops are considered to be in good to excellent condition.