Gov. Reynolds on latest COVID-19 trends: 'You will not see me shut down the entire state' 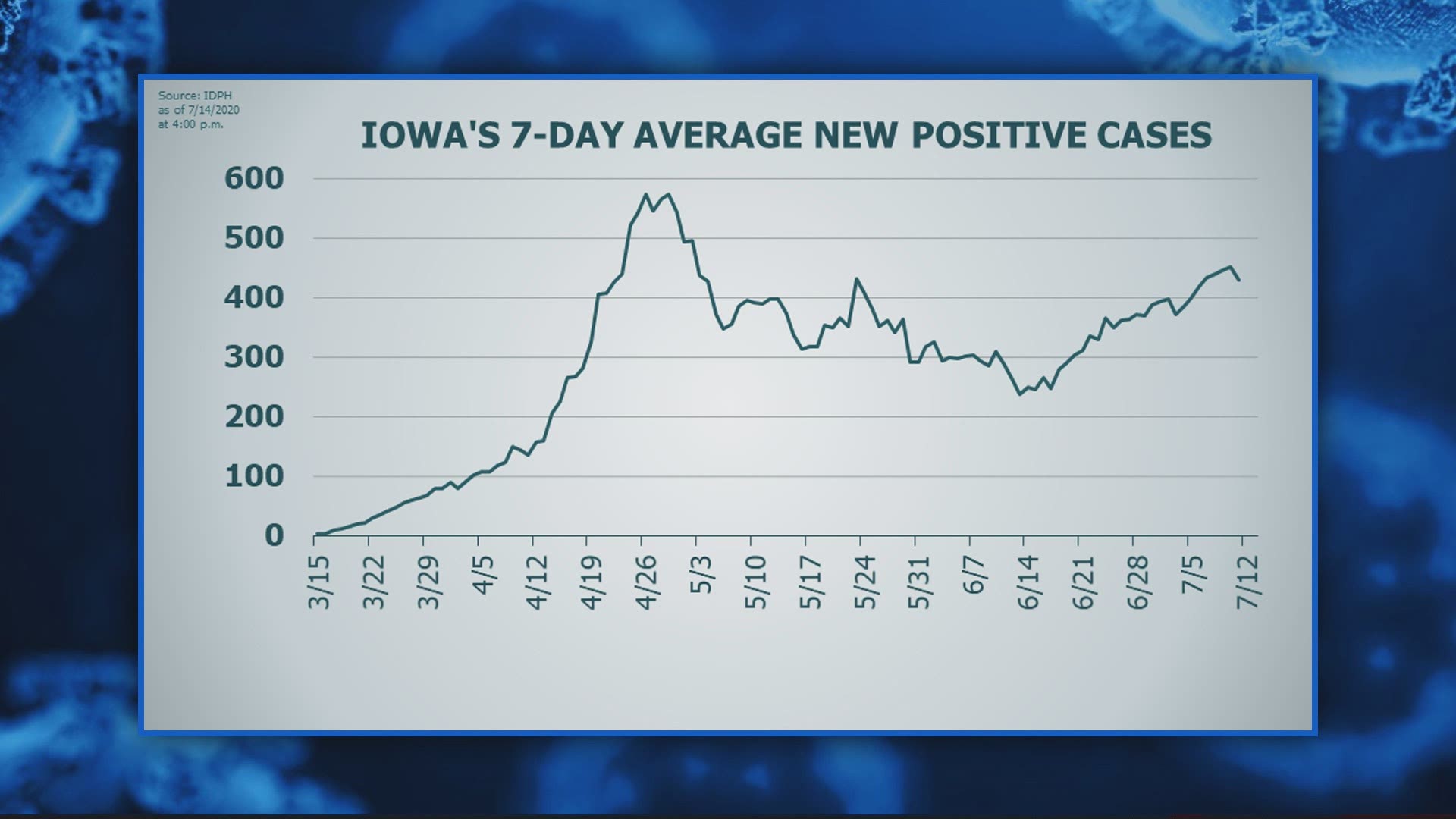 Gov. Kim Reynolds said Tuesday that Iowans will not see her close the entire state again as the number of positive COVID-19 tests continues to rise.

“As we're testing more, we're seeing the positive case numbers go up. That's just a reality,” Reynolds said. “And we know that it's still among younger adults, I think the average age this week when I sat down with Dr. Pedati was age 21 to 22.”

Local 5 reached out to Amy McCoy with the Iowa Deptartment of Public Health for further explanation. McCoy said via email that the average age of those infected dropped from 63 in March to 39 years this week.

By the end of June, the average age of new cases in Johnson and Linn counties was 21 years. In Dallas and Story counties it was 22 years. In Black Hawk it was 23 and in Scott it was 24, according to McCoy.

Reynolds reported that Iowa’s overall positivity rate bounced from 9.3% to 9.4%. Recent data shows Iowa at around 5.3%, according to Reynolds.

“I want Iowans to be assured that when we are [monitoring the situation] daily, we know where the highest positive cases are occurring and why,” Reynolds said. “And we’re carefully considering whether additional targeted mitigation efforts are necessary to slow the spread in some area.”

But those efforts would not include a statewide shutdown.

“You will not see me shut down the entire state,” Reynolds said. “We know where the increases are taking place, we have some idea of what we believe it may be tied to and so we will target our response based on the information that the Department of Public Health and the epidemiologist team is collecting.”

Reynolds reminded Iowans that the best way to mitigate the spread of the virus is to control their own actions, like wearing a mask and practicing social distancing.

Sand, a Democrat, is questioning IDPH and TestIowa on why COVID-19 data isn’t immediately reported to the state’s top public health agency.

“He has concluded that the State Hygienic Lab procedures do follow the law, and they have an extensive letter that they have put together that addresses the State Auditor's issues,” Reynolds said.

Iowa’s school districts are moving forward with their Return to Learn plans this fall, and Reynolds said schools have what it takes to keep students and staff safe amid this pandemic.

“I believe that school districts and teachers know without hesitation that our kids need to be in the classroom," Reynolds said. "You know we are doing them a disservice by not opening these schools back up and getting them to school, but we have to be flexible we have to think outside of the box and we have to look at different alternatives."

Reynolds also touched on the recent outbreak at the Fort Dodge Correctional Facility.

As of Tuesday afternoon, the prison reported 186 positive inmates and 16 positive staff members.

Reynolds said that the facility is retesting all inmates that have tested negative.