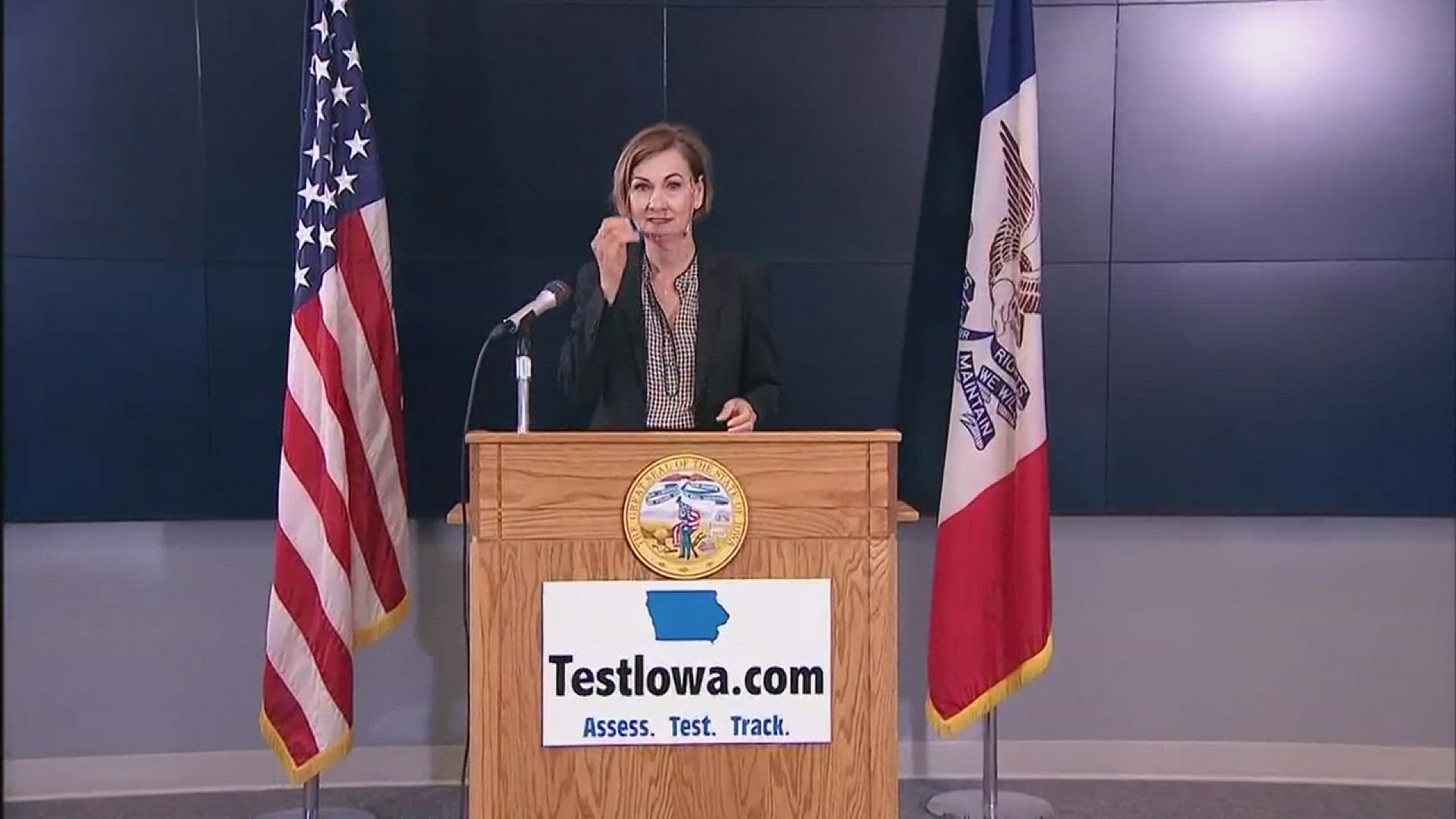 IOWA, USA — Gov. Kim Reynolds' administration is pledging to test 2% of Iowa's population for COVID-19 every month, following a recommendation from the Centers of Disease Control and Prevention (CDC).

"Testing and case investigation are two of the most important things that we can do to effectively manage virus activity in the State of Iowa," Reynolds said at her Wednesday morning press conference.

"In the month of May alone, more than 88,000 Iowans have been tested which equates to about 2.8% of our population," Reynolds said.

The CDC asked her administration to create a test plan with the goal of meeting at least 2% of Iowa's population each month.

Reynolds said "we should have the capacity to be able to do that."

The governor announced four more TestIowa sites will be opening around the state.

Another site opening on Wednesday is in West Burlington, which Reynolds said is a unique test site. This site will be a partnership between Iowa and Great River Health.

"At the beginning of this [pandemic] we established a drive thru site, but couldn't get it up and running because we didn't have the time," Wenzel explained.

That was when he reached out to Iowa Sen. Tom Green (R-Burlington) who then got them in touch with Paige Thorson, Reynolds' Deputy Chief of Staff and Policy Advisor on healthcare related issues.

"She took a chance on us, and we pitched this idea of saying hey let's work, work together through a public-private partnership, because we've got the drive, thru, we just need tests," Wenzel said.

"What should have been months is days to get tests in the hands of the clinicians," Wenzel said, praising all of those involved.

Reynolds said that her administration is currently working to replicate these drive thru testing sites across the state.

Reynolds was asked if there is an outbreak at a food production facility in Storm Lake, given the excessive spike in cases. Reynolds said it hasn't been confirmed.

"With our ability to track virus activity on a daily basis that really does kind of give us the information we need to know where we potentially see a hot spot or a potential spike," Reynolds said. "And if we can that's when we move the testing into that area start to, start to really identify the scope of the virus activity, where it is maybe stemming from and how we can proactively get in front of it."

Reynolds said, at this point, it has not met the criteria.

"But, you know, we're, we're testing to make sure that we understand what the scope of that is, and how we can start to isolate those that are testing positive immediately start the case investigation so that we can get the negative individuals separated, look at how we separate the shifts and how we continue to move forward to minimize as much as possible, the effect of a potential spike," she continued.

When do the residents of Storm Lake that don't work at the plant, or any city with an outbreak, get notified of an outbreak?

The Iowa Department of Public Health is supposed to confirm an outbreak if at least 10% of employees at a facility test positive. However, the outbreaks confirmed at Tuesday's press conference was known on May 11.

Sarah Reisetter with the IDPH said, "So we've been, we've been announcing them at these press conferences as the questions have been asked."

Reynolds then said it's the responsibility of local public health departments to let residents know of an outbreak.

Some Iowans with disabilities are having troubles accessing testing sites

Some Iowans with disabilities reported having issues getting tested at TestIowa sites. Access to transportation is a main issue.

Reynolds reminded Iowans that TestIowa isn't the only available option for testing.

"We have a whole host of options, it's another tool in the toolbox," she said. She then advised Iowans on ways they can get to sites.

"So friends, family, see if they can help get them to a facility, they also have the option to be tested through clinics and hospitals," she said.

RELATED: Cases, deaths in Iowa: COVID-19 by the numbers