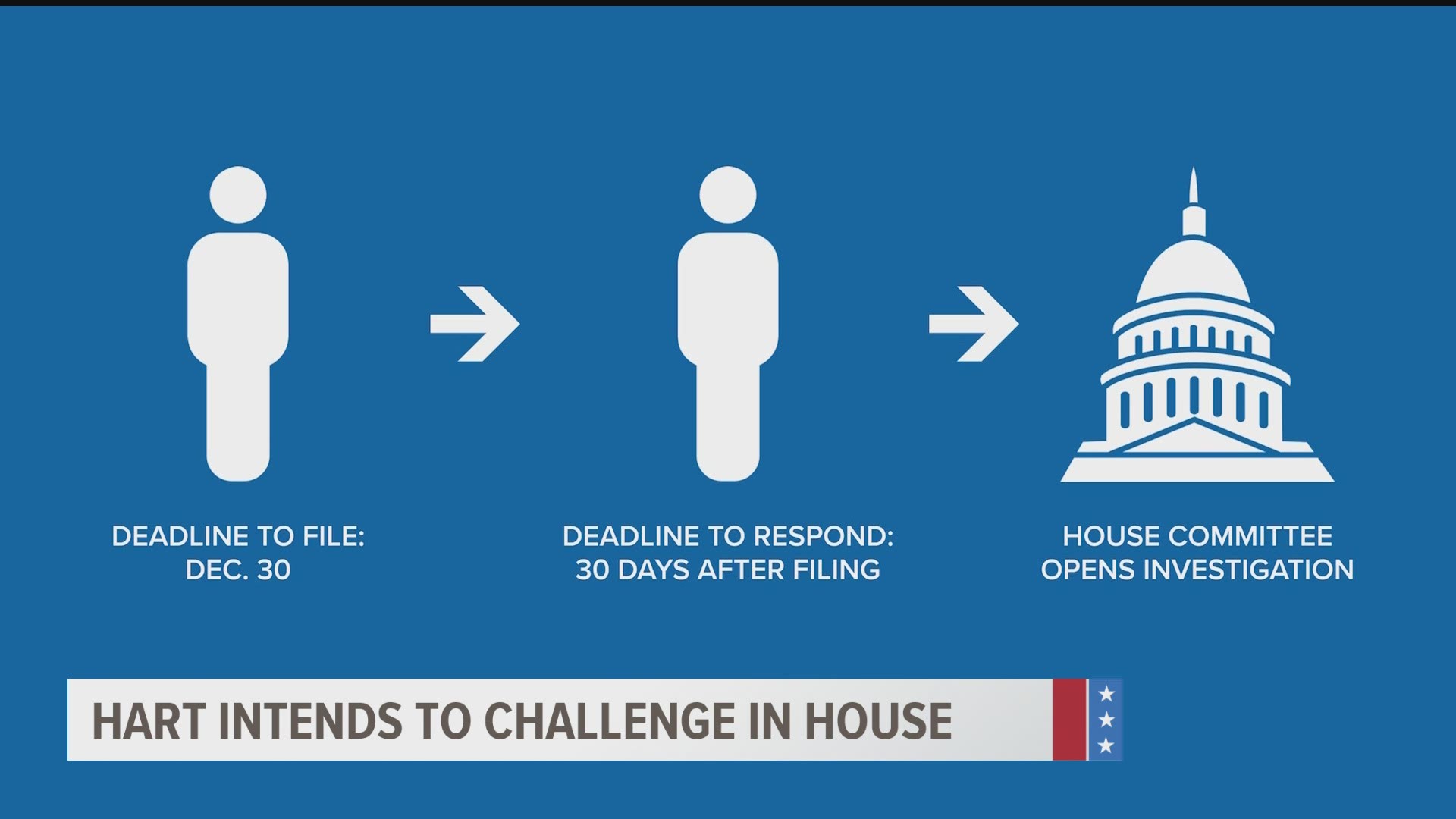 DES MOINES, Iowa — The U.S. House of Representatives will likely have the final say in an Iowa Congressional race.

The way she's challenging the results is legal, but it's not commonly used.

Before an official recount of all 24 counties in the district was called, initial results had Miller-Meeks ahead by 47 votes.

After votes were recounted in all of the counties, her lead shrank to six votes.

This is the closest Congressional race in the nation.

How candidates can contest election results

When candidates choose to contest certified election results, the matter is typically brought in front of the courts.

The most notable example of that was when the Supreme Court made the final decision in the 2000 presidential election.

There is another way to challenge results, though.

Under federal law, Rita Hart can file a petition contesting the election results in the U.S. House of Representatives.

Hart's campaign said she plans to do that.

The deadline for her to file is Dec. 30, within 30 days of Iowa certifying the results.

Miller-Meeks will have 30 days to respond to the filing.

Then the House Administration Committee will begin an investigation.

The Miller-Meeks campaign claims the Hart campaign is taking the partisan route since the committee leading the investigation has six Democrats and three Republicans.

Once the House Administration Committee investigation ends, they'll make recommendations in a report to the full House.

The House can then choose to:

The House can prevent either candidate from being seated until after the investigation, which would leave a quarter of Iowa's population without representation in the House.

That happened during a contested Indiana race in the 1980s.

A candidate wasn't seated until May, months after the Congressional session began.

The House may approve a resolution by a simple majority vote.

Their decision is final and is not reviewable by the courts.

The Miller-Meeks campaign said by skipping over a court appeal and going directly to the House, the Hart campaign is politicizing the process.

"They decided to skip the legal process and have gone into a purely political process," Miller-Meeks campaign attorney Alan Ostergren said. "They want to challenge the results and overturn the results of this election politically in the House of Representatives, essentially allowing a committee handpicked by Nancy Pelosi to decide who should represent Iowa's 2nd Congressional District instead of the voters."

All Iowans should be outraged by this decision. #ia02 pic.twitter.com/pdz44kz180

Local 5's Rachel Droze reached out to the Hart campaign several times for an interview. As of Monday evening, they declined to make the candidate or anyone from the campaign available.

They did provide a previously-released statement for this piece Monday afternoon.