Two out of the last three City Council meetings in Des Moines have ended in arrests. 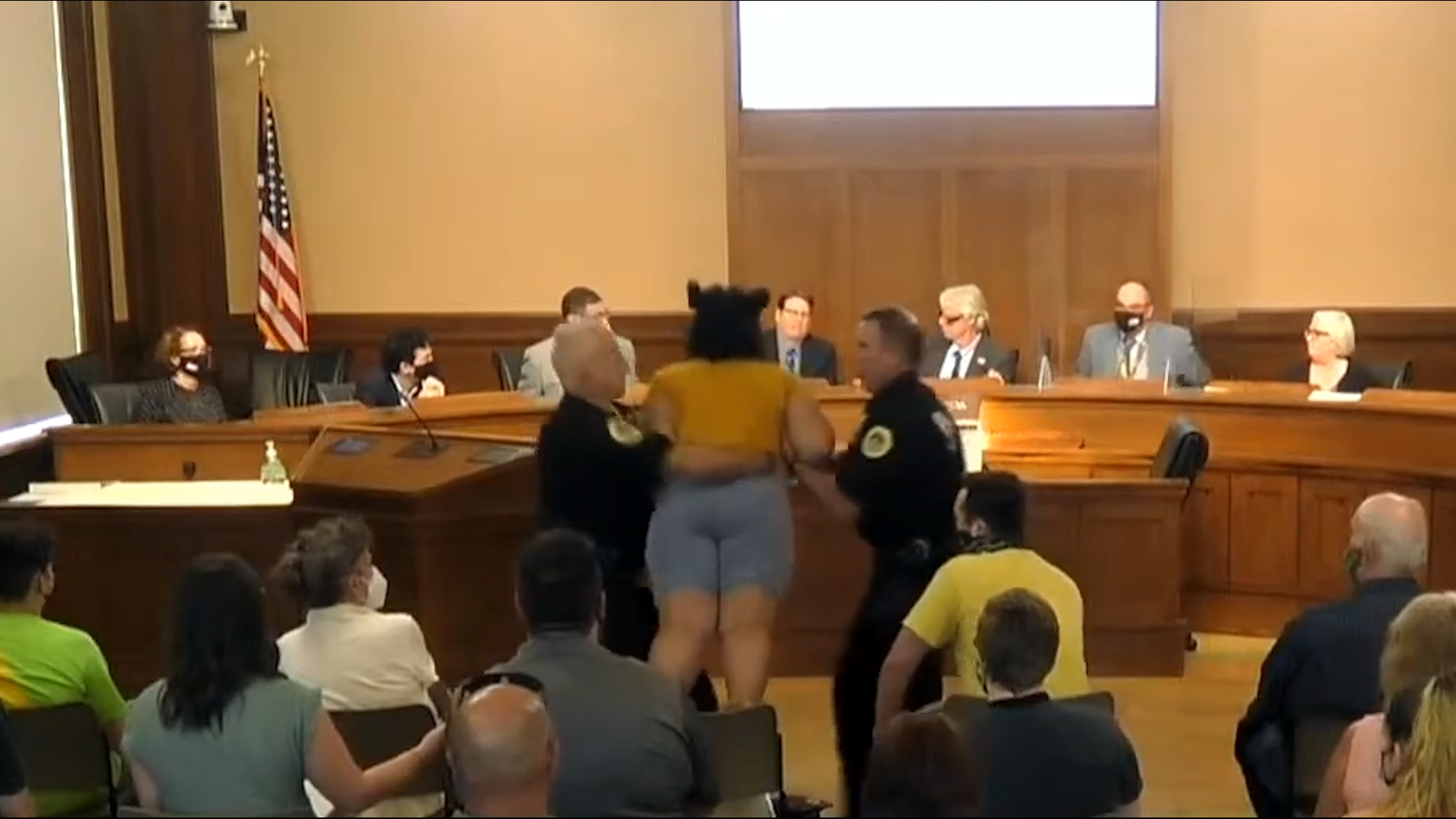 DES MOINES, Iowa — The past three City Council meetings have taken a different turn than in typical years. Community members who have come to voice opinions have stood on chairs and held signs--saying "Quit your job" or "Go Home, Racists"--expressing that the City Council wasn't letting them speak or comment.

Others, dissenting to agenda items during the public comments, have voiced expletives at councilmembers when addressing them.

At the beginning of each of the past two meetings, Mayor Frank Cownie began by announcing a series of rules and saying community members who disrupted would be removed from the meeting.

"We're passing [items on the agenda]," Boesen said. "We're doing the work of the council. So...it's not disrupting how we do business within the City. The one thing that does happen is some people maybe don't want to come to a council meeting that would have come down on some of the items they would to speak on."

Some of the community members who've held up signs and been escorted out of meetings have shared videos on TikTok under @DSMPeoplesTownHall.

Councilmember Josh Mandelbaum said he's spoken with several of those activists in outside meetings.

"We've had lots of conversations, a number of them with the people who are actually coming and disrupting some of the meetings," Mandelbaum said. "There were some meetings where we listened, we talked, and there was offers to have additional meetings after that, and they didn't want to."

He also added that when community members send emails to the council members including expletives, he's not likely to respond. He showed Local 5 emails that were sent from several community members, that read,

"Hello, I did not get all my thoughts across at the city council meeting today, I would like to say F*** You. You should all resign."

Mandelbaum said at that point, councilmembers aren't likely to respond.

"When someone engages with me that way, you might not get a response not just to that email, but your next email," he said.

RJ Miller, a community activist who spoke at the meeting July 19, said he feels as though the City Council needs to listen more, and he empathizes with the younger activists.

However, Miller fears the demonstrations may harm the activists' overall goals.

"Because when they're not professional, they will be painted in a certain light, as if they're monsters or stuff like that," he said. "I do encourage them to be more professional in what they're doing, but I also do understand the pain.

Councilmember Boesen also says she recognizes citizens' concerns and she's proposing a solution in the form of four community forums with a moderator.

"I have asked that we have a minimum four community conversation sessions so that we can have a more open dialogue," Boesen said. "Because the council meeting is really where we do the business of the City. And I think that the community conversations would give us an opportunity to really go have a question-answer session and get more input from citizens."

"I think that'd be healthy, as long as when we're asking questions and having a constructive dialogue that they're giving legit answers," he said.

Boesen says they will.

"We might not agree on what we want done, but there is no lack of wanting to hear from people and hearing their concerns."

The Des Moines People's Town Hall, while unavailable for an on-camera interview, sent Local 5 the following statement, in part, expressing their thoughts on what has transpired.

"Council has continually ignored their own rules (and constitutional law) and instead followed their own feelings to criminalize members of the public and physically remove them from public meetings. When council does decide to follow arbitrary rules, they do not apply them equally amongst the members in the meeting."