The law is named after Emmalee Jacobs, an ISU student killed in 2015 after being hit by a CyRide bus. 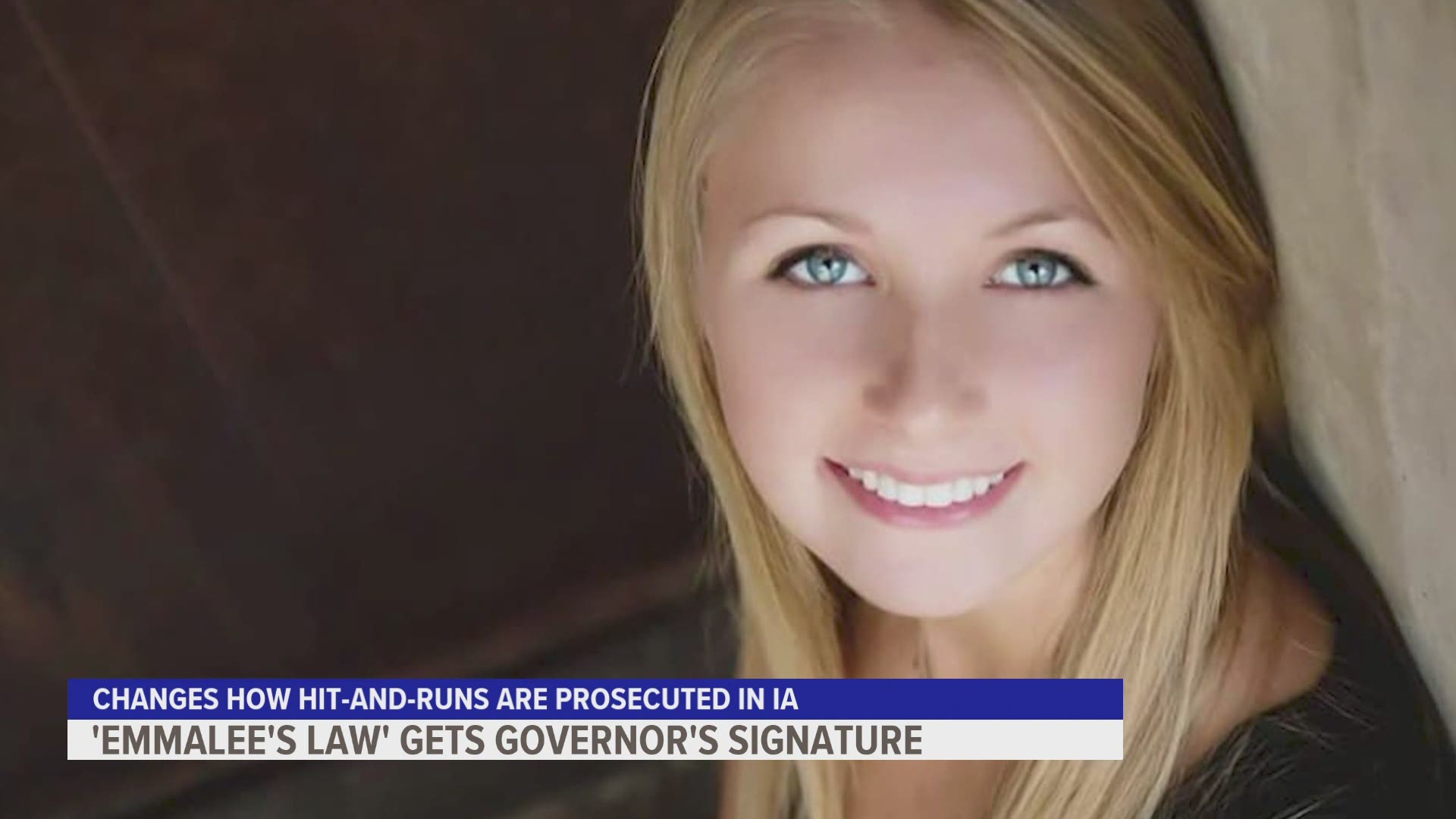 Emmalee's Law is named after Emmalee Jacobs, a young woman from Urbana, Iowa who was hit and killed by a CyRide bus driver in 2015.

The law requires a driver to come forward as soon as they realize they may have been involved in the vehicular incident resulting in injury or death.

Mother's day this year was bittersweet for Ann Jacobs. It's the sixth Mother's Day she's spent without her daughter Emmalee, who was struck and killed in 2015 while walking to class her freshman year at ISU. But this year, a law created in her honor is one step closer to becoming a reality.

Emmalee's Law passed unanimously through the Iowa House Friday, after being amended by the Senate. It now moves to the desk of Governor Reynolds.

"It feels good," said Ann Jacobs, of Urbana. "I mean, it’ll never change the fact that she’s not here anymore but I’m glad that it could help other families in the future."

He was arrested more than a month later and charged with failure to obey a traffic sign and leaving the scene of an accident resulting in death, but there was no evidence that showed he immediately knew he hit her and caused her death.

In 2016, Clague was sentenced to just 30 days in jail. The family saw it as a painful injustice.

Credit: Ann Jacobs
Emmalee Jacobs was 18 years old when she was hit and killed by a CyRide bus in 2015

According to court documents, Clague had texted a friend within hours of the incident, telling the friend he thought he had hit someone, but there was no way to prove he knew he had hit Emmalee upon impact. It's something that frustrated then-First Assistant Story County Attorney Jessica Reynolds, who says on the eve of the trial, the court ruled that the prosecution would have to prove that Clague knew he'd hit Emmalee upon impact.

Emmalee's Law would change that, requiring a driver to come forward as soon as they realize they may have been involved in the vehicular incident resulting in injury or death.

Emmalee's Law, named after a freshman ISU student hit and killed by a CyRide bus in 2015, is one step closer to changing the law for hit-and-runs in the state of Iowa. It passed through the Iowa statehouse on Friday and now moves to Reynolds' desk. Story at 10 on @weareiowa5news pic.twitter.com/jyGSbpg5bF

The law reads, in part:

If the driver of a vehicle leaves the scene of an accident resulting in injury or death...and later discovers that the driver's vehicle may have been involved in an accident that resulted in injury to or death of a person, the driver shall, as soon as reasonably possible, make a good-faith effort to immediately contact emergency services or make a 911 call.

Emmalee's parents, Ann and Brad Jacobs, say 18-year-old Emmalee may have been quiet outwardly, but those close to her as a kind-hearted, smart young woman with a great sense of humor.

Emmalee also graduated at the top of her class from Center Point-Urbana High School.

The family says they continue to honor her by sharing her memory in conversations and prayers.