The Iowa Department of Human Services is in charge of the facility for individuals with disabilities. The DOJ says past leadership withheld certain information. 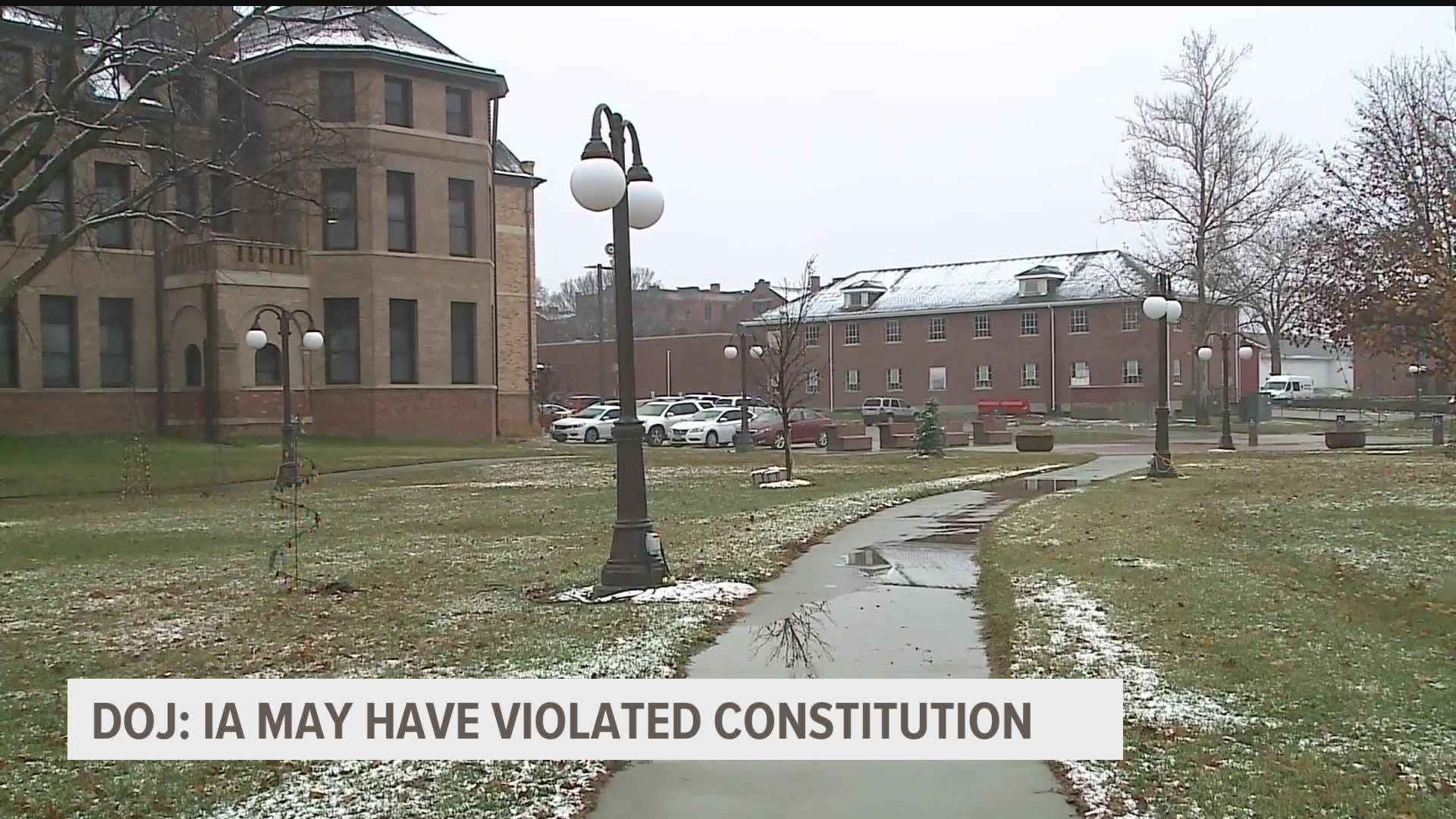 GLENWOOD, Iowa — A year-long investigation by the U.S. Department of Justice (DOJ) found evidence of unsupervised human experiments and inadequate health care at a state-run facility for people with disabilities.

The DOJ claims the state of Iowa violated the Constitution and federal law by putting Iowa's most vulnerable people in danger at the Glenwood Resource Center.

Tuesday's press release from the DOJ says in part:

"Individuals with disabilities are not human guinea pigs, and like all persons, they should never be subject to bizarre and deviant pseudo-medical ‘experiments’ that injure them. Human experimentation is the hallmark of sick totalitarian states and has no place in the United States of America."

The DOJ released the full 63-page report on Tuesday as well. The document, embedded at the bottom of this article, lays out the DOJ's case for why they believe Iowa violated Glenwood residents' 14th Amendment rights.

In December 2019, Glenwood was home to 195 residents, according to the report. The residents living there had intellectual/developmental disabilities (IDD) as well as other behavior and/or medical conditions "that are often complex and chronic."

Glenwood is meant to provide services necessary for these individuals to live their lives comfortably, like medical or nursing services, psychiatric services and/or more.

Over the last decade, the DOJ says care at Glenwood has "deteriorated."

The DOJ investigated Glenwood and the Woodward Resource Center in 2002 and found conditions "were constitutionally deficient."

Following this, Iowa and the U.S. entered a settlement agreement to guide reforms at both state-run facilities in 2004. Iowa came into compliance with the agreement, which then terminated it, in 2010.

Between the termination of the agreement in May 2010 and the beginning of the DOJ's investigation in November 2019, Glenwood had three superintendents and three acting superintendents.

Glenwood didn't continue all of the policies, procedures and programs that "had been instrumental in obtaining compliance with the Settlement Agreement," according to the DOJ.

The DOJ says it's "unclear" whether or not the Iowa Department of Human Services (DHS) was aware of, or approved of, any of these changes.

The report reads in part:

"[Rea] accelerated the pace of change away from polices, practices, and procedures that had been required to demonstrate compliance with the Settlement Agreement and instigated research and experiments on Glenwood residents.

What had already been a facility plagued by poor communication and integration among departments became even more dysfunctional. The quality of care declined as Glenwood leadership, managers, supervisors, and staff had to choose between, as a staff person told us, watching their backs and watching their clients."

The DOJ says the decline in care "was facilitated by DHS Central Office that was unwilling, unable, or both, to recognize and address the problem."

Rea was fired in December 2019 after the DOJ began their investigation.

One experiment involved overhydrating residents. According to the DOJ report, eight of the nine residents involved were tube-fed, and therefore unable to resist the treatment.

The report gives extensive details on the harm the overhydration did to residents, including the nervous system, skin, cardiovascular system and more.

The DOJ report says past leadership at DHS withheld this information from state legislators when questioned about the facility's unusually high death rate.

Physical restraint use at Glenwood increased by 300% from 2017 to 2019— when Rea was superintendent.

The death rate at the facility also rose sharply in that time, despite there being a 10% drop in Glenwood's population.

The DOJ also lists out changes that the state needs to make to fix these problems at the facility.

The changes include making sure residents or their guardians provide informed consent before residents are subjected to research, making sure individuals are getting adequate physical and behavioral health care, and implementing stronger oversight policies so that DHS knows what's going on at Glenwood.