The Iowa Senate approved a proposed Constitutional amendment to restrict abortion rights in the state Tuesday. 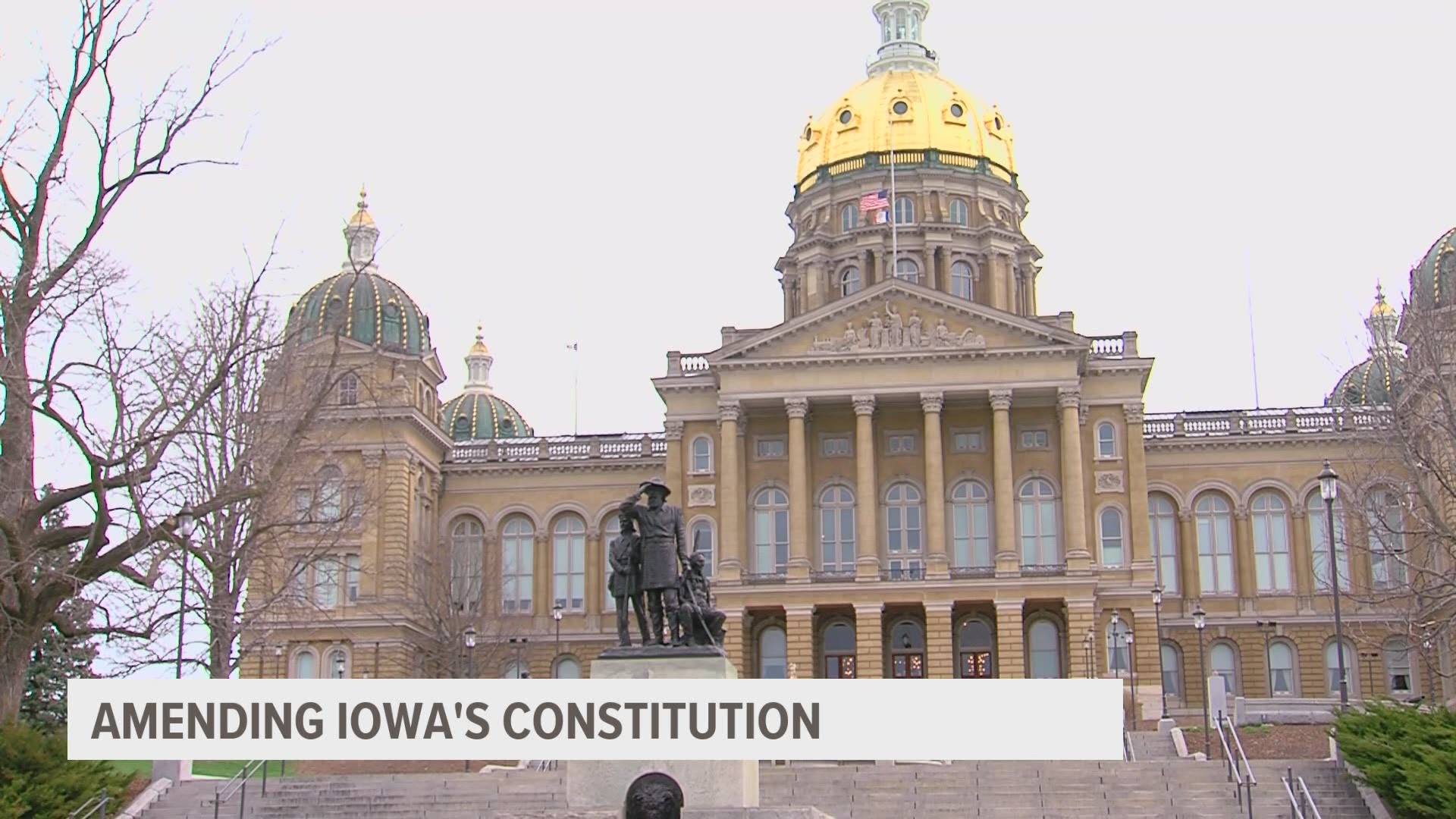 DES MOINES, Iowa — Iowa lawmakers took steps to restrict abortion rights in the state and prevent tax dollars from going to abortion services, but it could be years before any changes are made.

On Tuesday, the Iowa Senate approved language in a proposed Constitutional amendment that would make it so the Constitution would not recognize, grant or secure a person's right to an abortion.

It also wouldn't require public tax dollars to be used to pay for abortions.

In 2018, the Iowa Supreme Court ruled abortion to be a fundamental right to Iowans.

Abortion is also protected at the federal level because of the U.S. Supreme Court's 1973 Roe v. Wade ruling.

Before Iowa could ever legally restrict the procedure, two things would need to happen:

Amending Iowa's Constitution is tough to do

The process to amend Iowa's Constitution is pretty lengthy.

Before the Constitution can be amended, here's what needs to happen.

We'll use the abortion amendment, House Joint Resolution 5, as an example.

The Senate approved the proposed amendment Tuesday. Now, it'll go to the House for final approval.

RELATED: Reynolds to introduce bill that would withhold funding to local governments that defund police budgets

If that is done, step one for amending the Constitution is complete.

The proposed amendment needs to be approved by back-to-back General Assemblies, meaning lawmakers in office for the 2023-2024 legislative session would, again, have to approve the measure.

If that happens, step two is complete.

If the proposed amendment gets this far, Iowans would then get to weigh in at the ballot box.

The earliest this could happen is in the 2024 General Election.

"The statewide vote will take a lot of a lot of work on both sides," Drake University Law Professor Sally Frank said. "Very conservative states have rejected such constitutional amendments."

Even if the state gets this far, there's another hurdle that'd have to be overcome before abortion rights could be restricted in Iowa.

Turning to the U.S. Supreme Court

The U.S. Supreme Court already weighed in on abortion in its 1973 Roe v. Wade ruling, which made abortions a protected right for women in America.

That ruling would need to be overturned in order for any state law restricting abortion rights to be legal.

"As long as Roe v. Wade is the law of the land, they will not be able to get around it," Frank said. "However, of course, there's strong speculation that with President Trump's appointments to the Supreme Court, many in the anti-abortion organizations are hopeful that the court will overturn Roe v. Wade."

Frank said no matter where you stand on this issue, do your research ahead of the next election.

This will ensure Iowans vote for candidates whose beliefs align with their own.

Lawmakers continue to push for abortion restrictions, the Courts keep saying no

There have been previous attempts to restrict the right to abortions in Iowa.

In June 2020, Republican Gov. Kim Reynolds signed a law requiring a 24-hour waiting period before getting an abortion.

Within days of it being signed, a judge issued a stay on it after Planned Parenthood sued the state.

That law won't go into effect until the lawsuit is over.

Another 2019 law attempted to prohibit abortions once a fetus has a heartbeat, but a district court judge ruled the so-called "heartbeat law" unconstitutional.

Finally, in 2018, the Iowa Supreme Court ruled a law requiring a 72-hour waiting period before a woman can get an abortion was unconstitutional.

In that 2018 decision, justices ruled abortion is a fundamental right protected by the Iowa Constitution.