From face shields, to masks, to plastic dividers during rehearsals, Iowa music students of all ages are experiencing ensemble-playing during a new era. 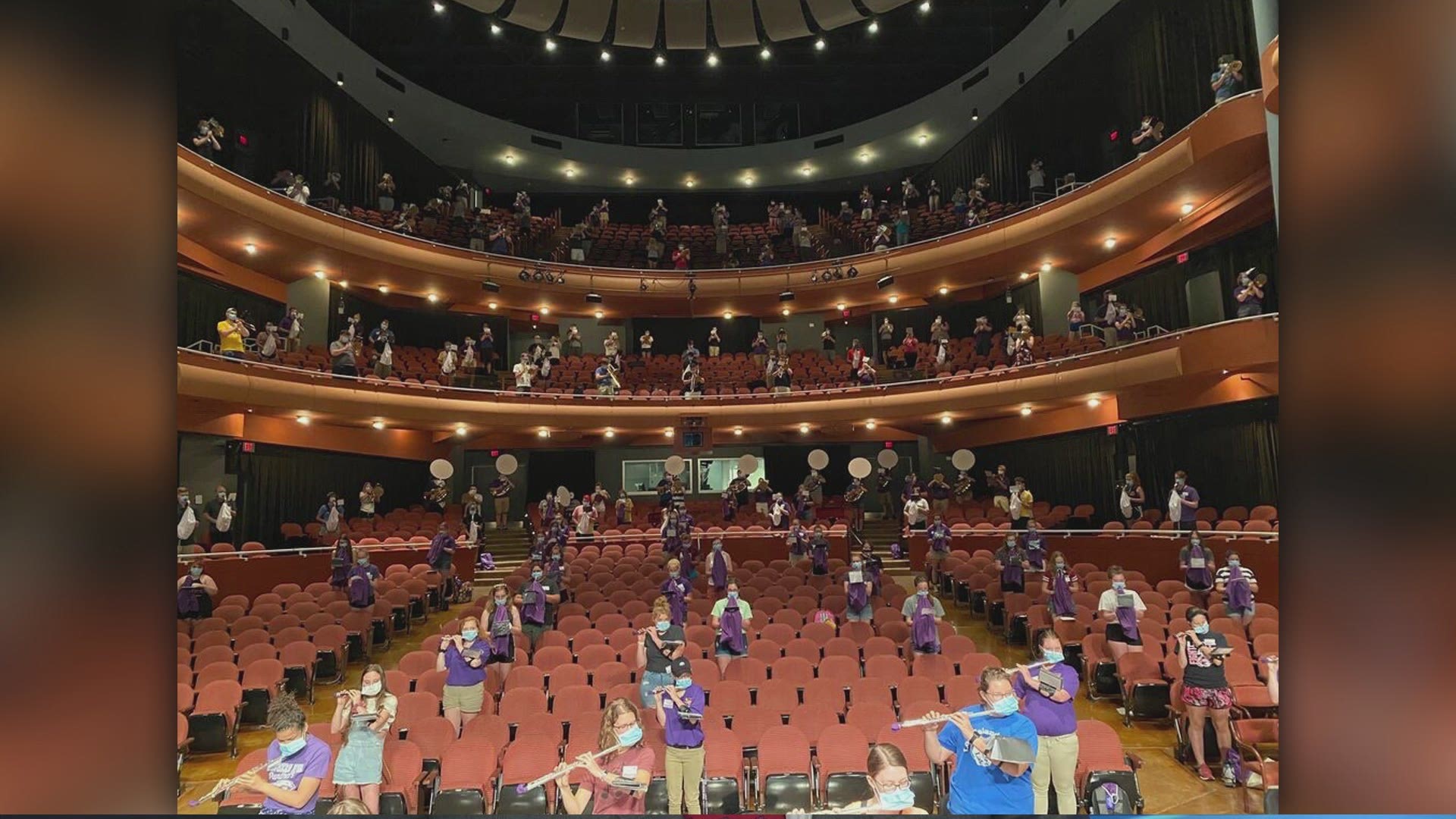 "We already take a big band, and at a 6-foot interval we look even bigger," said Williams.

She said the marching band season typically starts in June, but due to COVID-19, they began a late start, in July. At that point, they had marked dots on the field, six feet apart.

When it came time to choreograph the show, Williams said every student was at least 6 feet apart. On top of that, each student wears a mask as soon as they stop playing.

"It's just another visual element that's added to the show," said Williams.

Williams said now that the schoool year has started, Ankeny Community School District is in the process of implementing masks while playing, which include surgical masks with slits cut out for the mouthpiece.

However, at the middle school level, band directors need to view a beginning student's embouchure, which is how a person forms their mouth around mouthpiece. Toni LeFebvre, band director at La Salle Middle School in Cedar Rapids, says that means she'll have students wear face shields when playing.

"The [face] shields will be really handy for me as a middle school band director because it's important for me to be able to safely, from a distance see students' embouchures as they're developing," said LeFebvre. "It's easy for some habits to start to develop of their embouchure and their mouth isn't working the right way on the instrument so I want to catch that before it turns into a bad habit down the line."

LeFebvre says students will indeed wear facemasks; they just won't be on while they're actually playing a musical passage. As soon as they finish playing, up goes the mask again.

Funderburk says the UNI College of Humanities, Arts, and Sciences provided the music program with over $40,000 to purchase costly equipment to make safe performing a possibility.

"Twenty computers, twenty microphones, stands and interfaces so that we've set up twenty of the practice rooms as basically mini recording studios," said Dr. Funderburk. "Some [students] still need to do remote lessons because, particularly singing without a mask is very problematic. You can't do an opera lesson without a mask on, so they needed a space that would be easy to use."

This photo, courtesy of @iamdrfun at @UNI_SOM, shows how the @northerniowa music students are safely adapting rehearsals during the pandemic. Dr. Funderburk says he worked with the UNI HVAC engineer to test the air circulation, even utilizing his own fog machine in the process. pic.twitter.com/Jg9yz2rirc

"I think we're doing everything that can be done," said Dr. Funderburk. "Students have been great--they've been the ones expressing how much they appreciate this effort to keep them safe."

RELATED: Teaching band in the age of coronavirus