Dalton Jack, a Poweshiek County sheriff's deputy and Mollie Tibbetts' employer at the time of her disappearance were among the state's witnesses Wednesday. 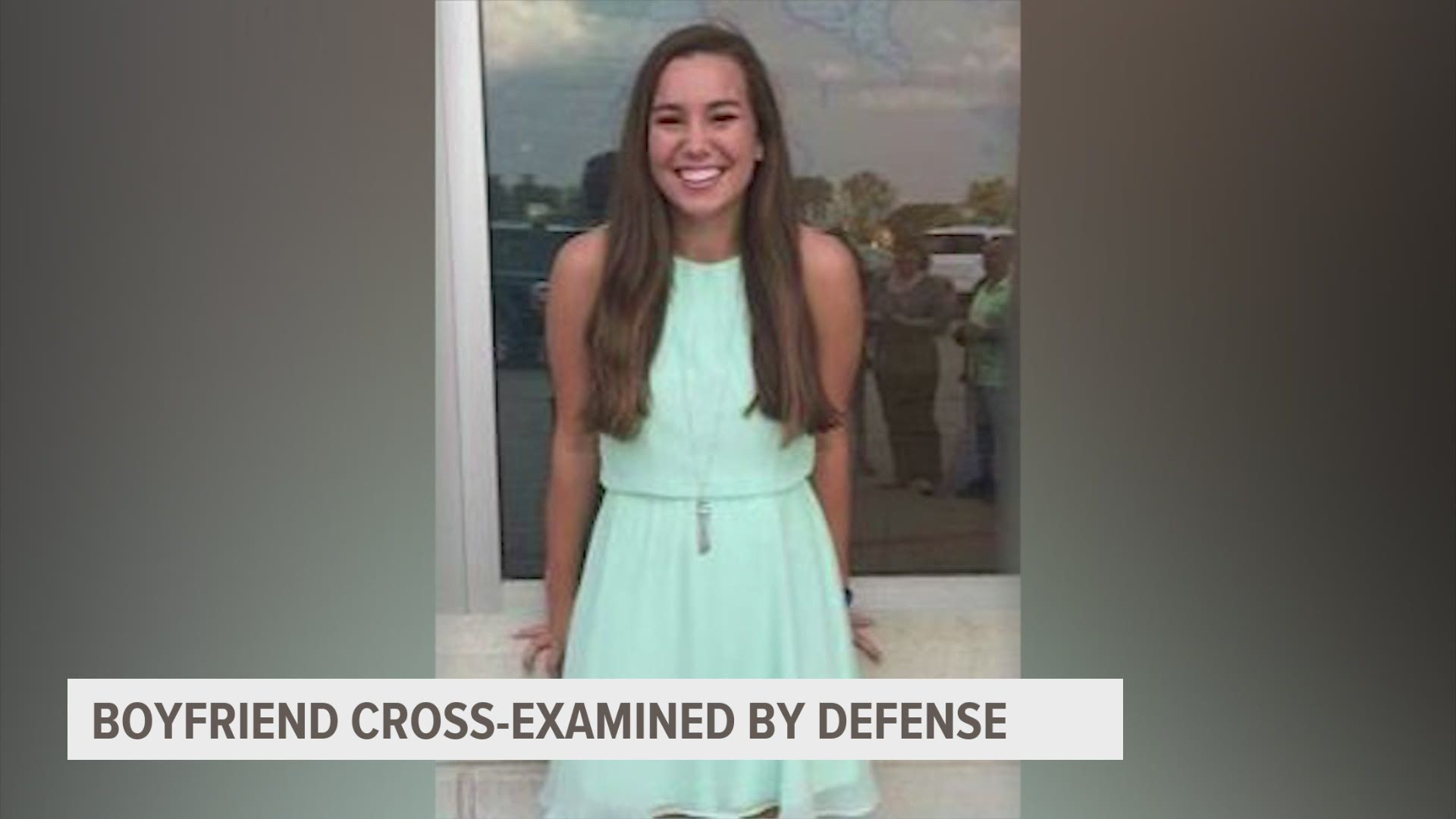 26-year-old Cristhian Bahena Rivera is charged with Murder in the First Degree after Tibbetts, a 20-year-old University of Iowa student, went missing during a run in July 2018.

Her body was found a month later, with law enforcement saying Bahena Rivera led them to her body in a rural Iowa cornfield.

Jury selection in the trial began Monday and finished around midday Tuesday, with 12 jurors and three alternates picked. The jury consists of eight women and seven men.

The trial's location has been moved twice: Once to Woodbury County in western Iowa, and a second time to Scott County in eastern Iowa.

The trial will take place inside the Scott County Courthouse in downtown Davenport and is expected to last 10 days, according to an order from Judge Joel Yates.

Mollie's boyfriend, Dalton Jack, testified Monday that while he did have a relationship with another woman while he and Mollie were dating, they moved past it before her disappearance.

"I wholeheartedly believe he's guilty," he said of Bahena Rivera when asked why he didn't want to testify at the trial.

The jury also heard from Blake Jack, Dalton's brother, Deputy Matt Simpson with the Poweshiek County Sheriff's Office and a cousin of Bahena Rivera's who said she sold him a Black Chevy Malibu prosecutors say was caught on camera near Mollie as she was running.

If convicted, Bahena Rivera faces life in prison without the possibility of parole.

RELATED: Everything you need to know in Mollie Tibbetts case ahead of Cristhian Bahena Rivera's trial

Witness may step down. Court adjourns for the day.  Court is to resume Thursday, May 20 at 8:30 a.m.

The defense cross examines. They ask why Lorenzana would buy him a car.

"He's my cousin and he needed a way of transportation," she replied. With prompting from the defense, she confirmed it was because he did not have papers.

State calls Arely Nunez-Lorenzana, Cristhian Bahena Rivera's cousin. She says they would mainly see each other at family gatherings.

Court is in a recess.

The defense conducts a short cross-examination, going over the map displayed in the exhibit.

After hearing of Mollie's disappearance, Steward said she recalled driving passed and seeing her running the night before, saying, "My heart sank because I knew that I passed her," said Steward.

Kristina says she got a text telling her Mollie was missing about 24 hours after seeing her running. She says her heart sank. She said she decided to go out and drive around to look for Mollie for about an hour. Reported the sighting to police. @wqad #mollietibbetts pic.twitter.com/IERuwR5ARJ

The State shows a diagram of where Steward saw her running, recognizes the area as the "S" curve in Brooklyn, Iowa.  This is "Exhibit 6".

Steward saw her running while driving past her as she was driving to her parents’ home. 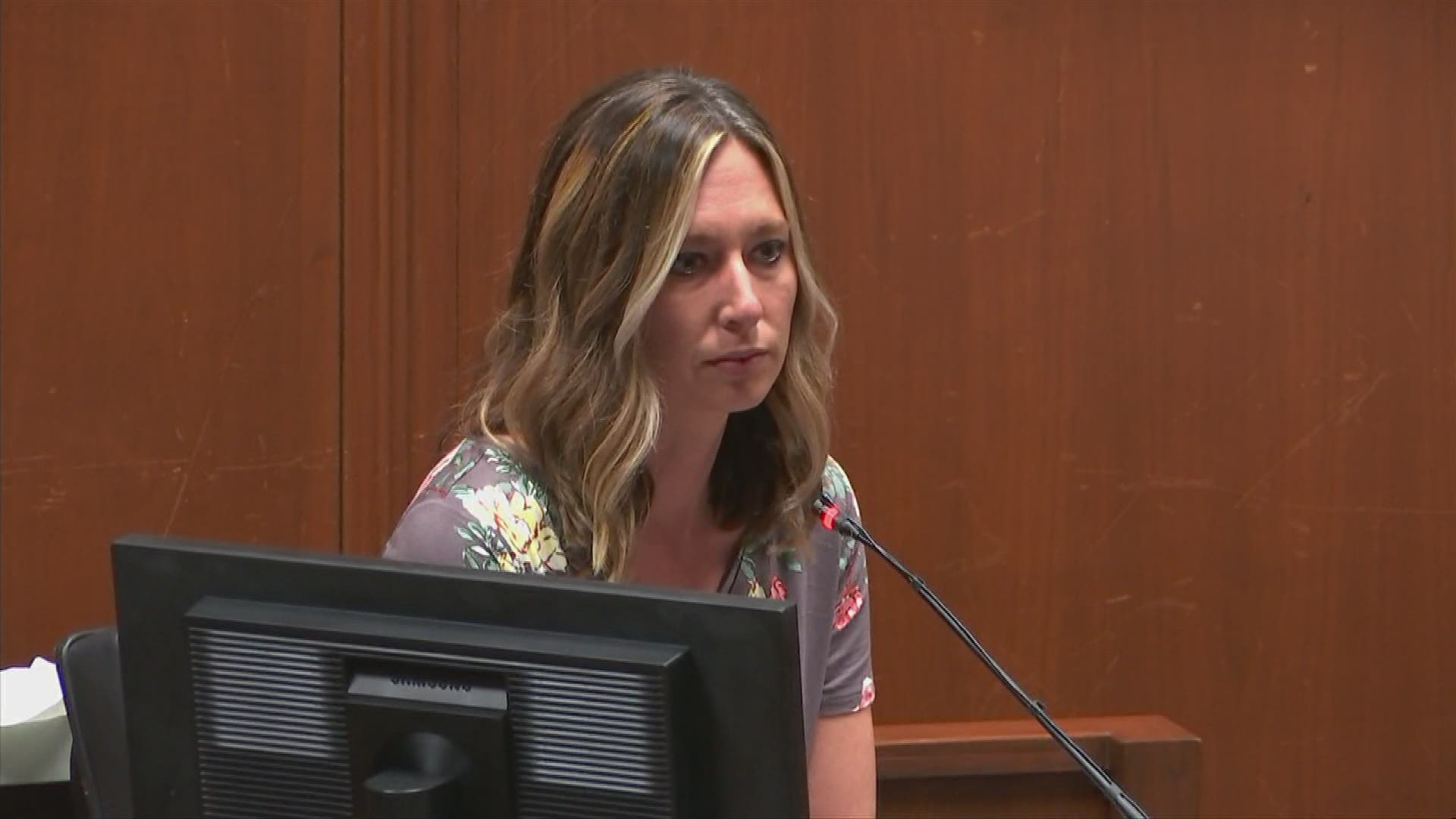 State calls next witness, Kristina Steward. Steward owns a beauty salon in Brooklyn, Iowa. Mollie was a client of hers.

Scheck says she tried to get ahold of Mollie when she didn't show up for work, trying to reach her through phone calls, texts and reaching out to a family member.

Supervisor says Mollie was a reliable worker, finished her shift on July 18th, the last day she was seen. @wqad #mollietibbetts

Court is back in session. State calls Jillena Scheck, a coworker and family friend of Mollie Tibbetts.

Court breaks for lunch. Trial will resume at 1:15 p.m.

Court will break for lunch now until 1:15pm. @wqad #mollietibbetts

Deputy Simpson describes what the he found when he arrived at the house where Mollie Tibbetts had been staying.

Deputy Simpson also visited another home where Tibbetts had been known to the stay.  According to Deputy Simpson, the owner noted that Tibbetts' running shoes and earbuds were missing.

Next witness for the state: Deputy Matt Simpson with the Poweshiek County Sheriff's Office.

Dalton testifies he does not know Bahena Rivera and did not have access to the Black Chevy Malibu prosecutors say was seen in the area of Mollie running.

"I wholeheartedly believe he's guilty," Dalton says after Assistant Attorney General Scott Brown asks why he doesn't want to be in the courtroom with Bahena Rivera.

Dalton testifies he arrived on a plan yesterday (Tuesday) and did not want to testify voluntarily.

"I didn't want to be in the same room as your defendant," he tells defense attorney Chad Frese.

State back up to ask questions, Dalton says he did talk with prosecutors over the phone while serving in the military.

Dalton says he did not want to testify in this trial, didn't want to be in the room with the defendant. "I'm obviously not his biggest fan. I whole heartedly believe he is guilty." @wqad #mollietibbetts

Frese asks Dalton about the Find My iPhone app, as well as a vehicle insurance tool in Dalton's car that would've tracked the car's movement.

Dalton testifies he wasn't on the move, and wouldn't have used the Apple Maps app for any directions the night Mollie disappeared.

Dalton admits he had a temper when he was about 16-17 years old. Says he had a short fuse. "You've been known to fight, right?" "Yes." @wqad #mollietibbetts

Defense going over Dalton's phone activity. "Would there be any reason you were using Apple maps on your phone that night? Can you think of any reason why?" Dalton says he rarely closed his apps on his phone. @wqad #mollietibbetts

Defense: "Would you agree with me that you knew Mollie's running routes better than anyone?"
Dalton: "No." @wqad #mollietibbetts

Defense grilling Dalton on relationship with Mollie, says she caught him cheating with another woman after going through his phone. Says he didn't think that information was relevant during interviews with police after Mollie's disappearance. @wqad #mollietibbetts

Dalton says Mollie when through his phone and that's when he found out about the relationship with another woman.

"The reason I use Snapchat is because it was my primary form of communication with a lot of people," Dalton says when asked why he used Snapchat to communicate with a second woman.

Dalton testifies he did have a relationship with a woman other than Mollie. He withheld that information from law enforcement because he "didn't deem it necessary," Dalton says.

Frese says Dalton told officers the fall of 2017 is when the relationship with another woman happened.

Dalton admits he withheld information about another relationship he had with a woman other than Mollie. "I was 19 years old, and I screwed up one time. Mollie knew about it, and we got past it." @wqad #mollietibbetts

Defense attorney Chad Frese says Dalton also had a conversation with Deputy Steve Kivi with the Poweshiek County Attorney's Office. Frese references interviews where Dalton said he was in Brooklyn, not Davenport, but Dalton says he does not recall the details of those conversations, which happened in July 2018.

Dalton clarifies he was in his hotel room with his coworkers the night of Mollie's disappearance. But upon cross-examination, Dalton says he did tell police that he was in his room in Brooklyn watching movies the night she disappeared.

Cross-examination is in reference to an interview Dalton had with Deputy Matt Simpson with the Poweshiek County Sheriff's Office.

After returning from break, Dalton answers a couple final questions from the prosecution.

Dalton joined the Army in Nov. 2018 after Mollie's murder - says he needed to get away for a while. Defense questioning Dalton about his whereabouts the night Mollie disappeared, stories he told police. @wqad #mollietibbetts

Dalton testifies a coworker of Mollie's called him on Thursday, July 19, 2018 that Mollie hadn't reported to work. He called Mollie multiple times but couldn't reach her.

Jury is dismissed for a 15-minute break.

Dalton says Mollie ran almost every day, up to six miles. Usually at night when it was a little cooler. Wore an armband for her phone, wireless ear buds and a FitBit.

Jury sees this pic of Mollie, her senior photo. Dalton was there when it was taken. They were together 3 years, started dating his senior year of HS. She was a year younger. Still remembers her phone number. @wqad #mollietibbetts pic.twitter.com/wgDyMcMIO7

Dalton Jack is the next witness. He’s a sergeant with the Army stationed at Fort Bragg. He was Mollie’s boyfriend. @wqad #mollietibbetts pic.twitter.com/yhwe3giwMw

Jennifer Frese, attorney for Cristhian Bahena Rivera, begins cross-examination of Blake Jack. This is the first we've heard from the defense.

Jack heard from his brother that he couldn't reach Mollie. Also tried to call her cell, no answer. Eventually went home to check in. No sign anything was unusual at home.

Home cameras not working because of a storm. Group of friends decides to call police.

Blake Jack discusses when he first heard Tibbetts may have been missing. Jack said he tried calling Tibbetts, checked to see if she was at his house, and checked with neighbors to see if they had seen her.

Blake Jack: Lived with Mollie and her bf/his brother Dalton. Had never met #cristhianbahenarivera and name had never been mentioned. Blake says he was out of town for work when Mollie disappeared. #mollietibbetts @wqad

A 10-minute recess is called to address audio issues in the courtroom.

Defense opts to give its opening at the conclusion of the state's case. First prosecution witness is up. Blake Jack, the brother of Mollie's boyfriend.

"There can be no other conclusion, than that the defendant killed Mollie Tibbetts, but I'll ask you to return a verdict," he said. "The only verdict that the evidence demands that you find the defendant guilty of murder in the first degree."

State says it will rely on three key items in its case: 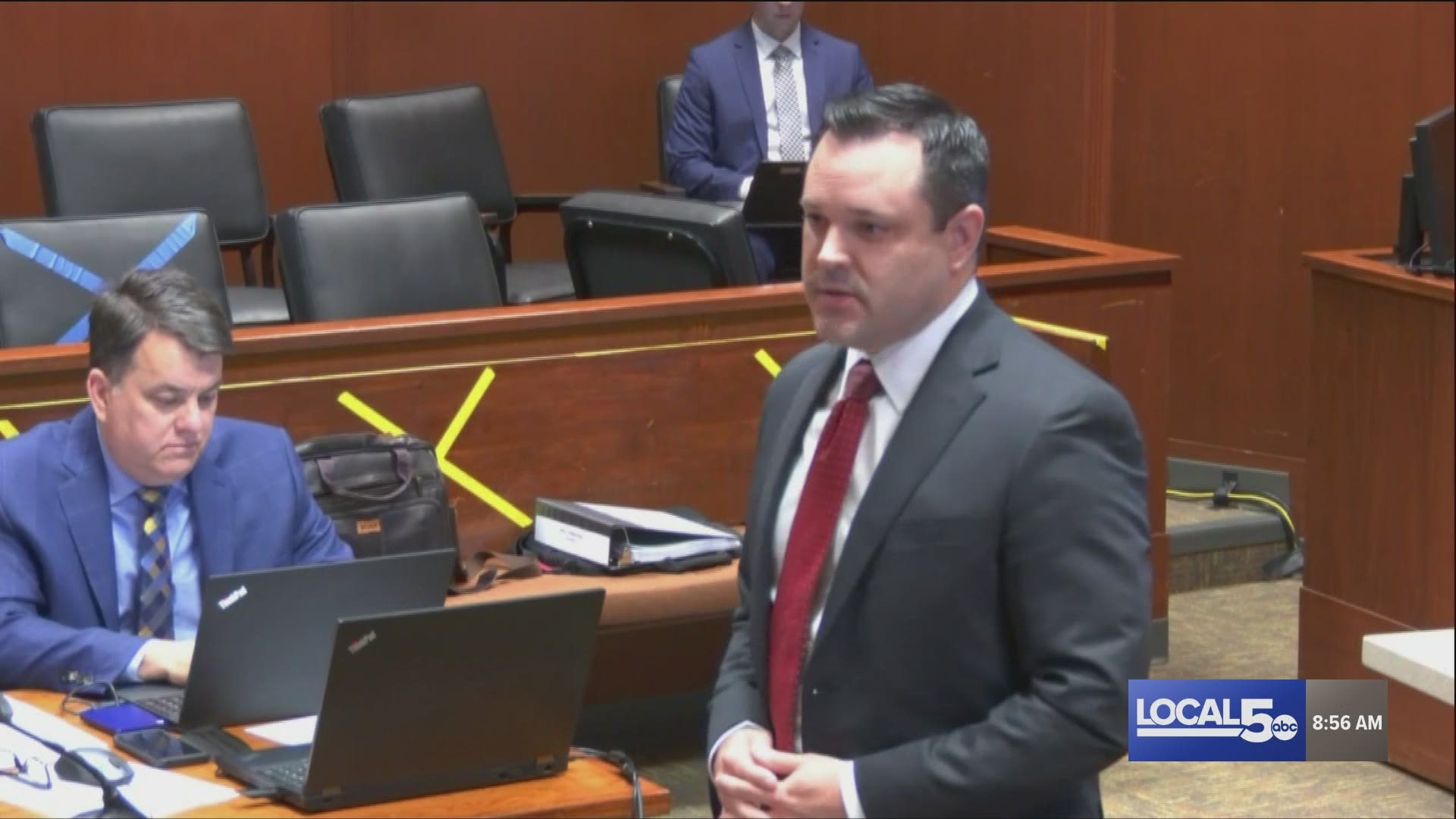 Klaver: In search for Mollie, surveillance video shows a vehicle several times. Black sedan with some distinctive chrome. Belonged to #CristhianBahenaRivera August 20 - Police follow up with him. He agrees to an interview. @wqad #mollietibbetts

"Mollie Tibbetts. This case is her story." Klaver says. "July 18, 2018, Mollie's house-sitting for her boyfriend in Brooklyn, Iowa, taking care of the dogs. Went out for a run on one of her usual routes."

"Mollie Tibbetts. This case is her story." Powshiek Co. Attorney Bart Klaver giving opening statement. July 18, 2018 Mollie house sitting for her boyfriend in Brooklyn, IA, taking care of the dogs. Went out for a run on one of her usual routes. @wqad #mollietibbetts

The jury has been seated, and Judge Joel Yates is giving instructions.