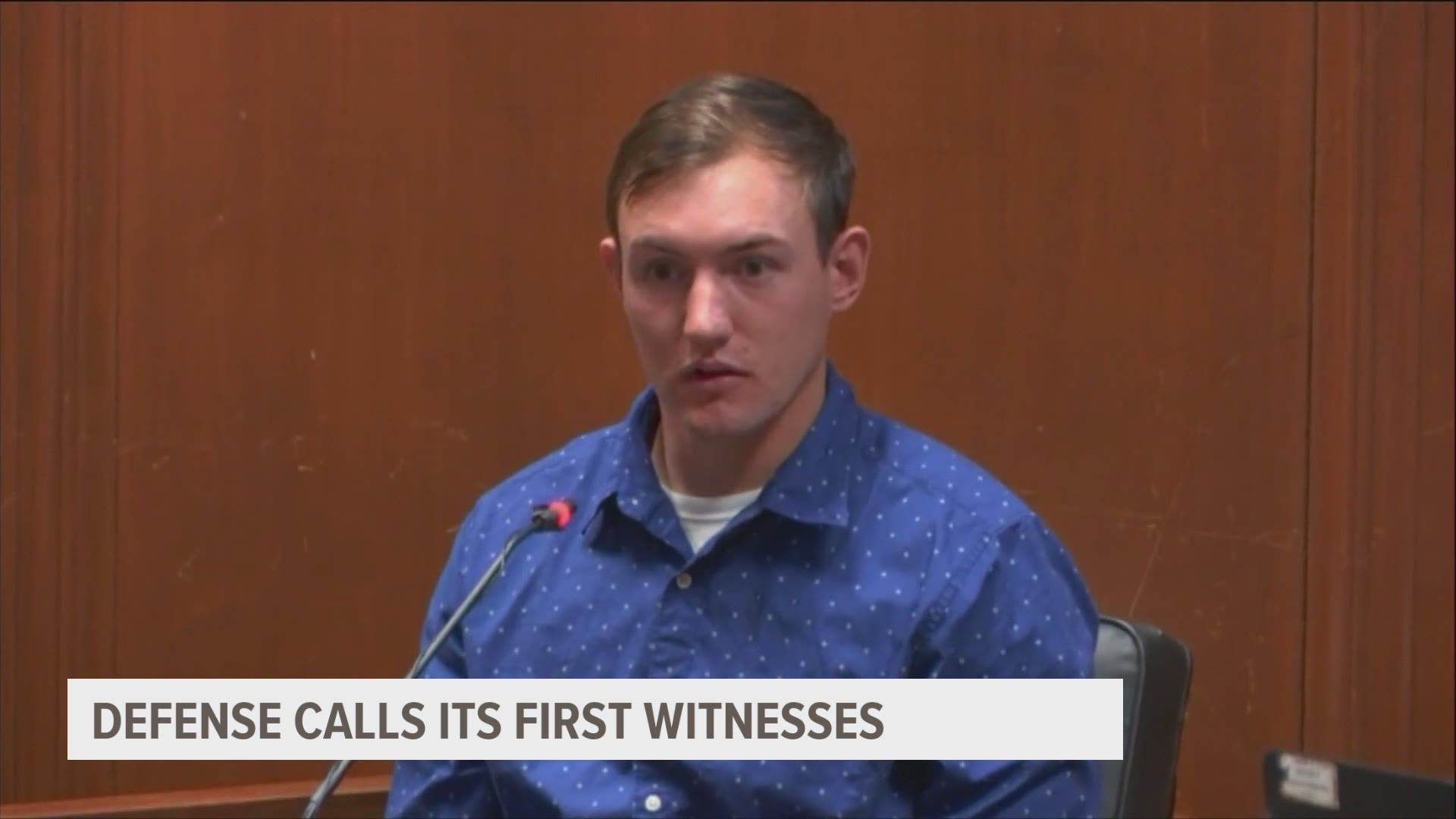 Defense attorneys in the murder trial of Cristhian Bahena Rivera gave their opening statement Tuesday in the death of Mollie Tibbetts.

"The State in this case, they got what they wanted and they closed the case," attorney Jennifer Frese told the jury. "They got what they needed, there was an intense amount of pressure, that's what the evidence has shown you, to close this case, to arrest someone for this vicious crime."

DNA expert Dr. Michael Spence testified he normally gives second opinions in criminal cases, but does not conduct his own testing of samples.

"Just based on what the typical protocols are for doing all the steps ... I didn't see any major issues with handling or possible risks of contamination or protocols that were in place that weren't followed," he said.

Next up was Alejandra Cervantes, Bahena Rivera's aunt, who testified she went to the sheriff's office when they heard about her nephew being questioned.

Iris Monarrez Gamboa, the mother of Bahena Rivera's child, told the court she didn't know him to be angry or violent.

Frese: "Did Christian Bahena Rivera ever express any sort of anger that you believed was excessive?"

Frese: "He had any sort of anger problems?"

He was questioned about his relationship and future plans with Mollie, as well as another woman he was seeing early on in the couple’s relationship. He testified about text conversations regarding those relationships. 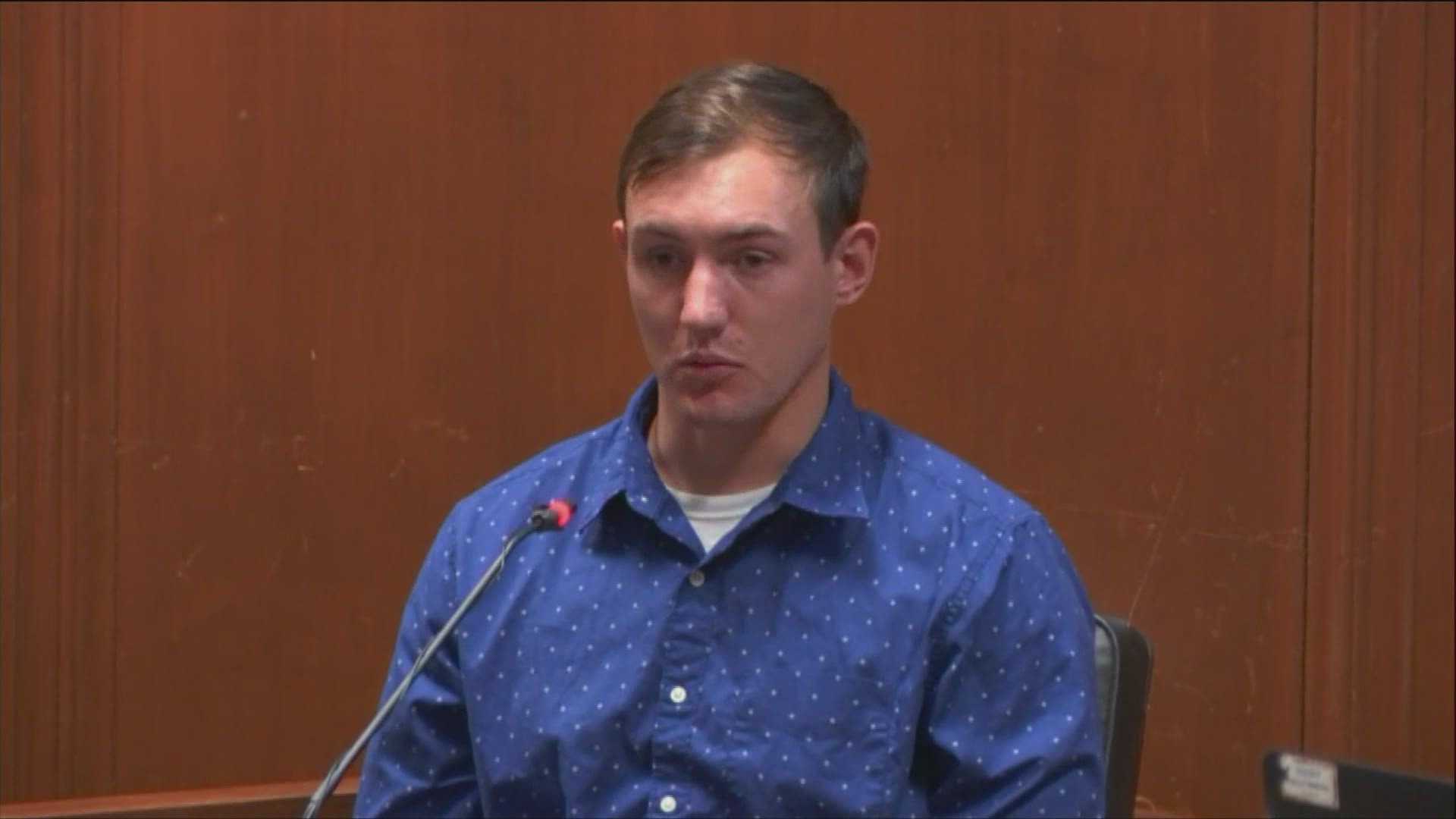 Prosecutors rested their case Monday after the State Medical Examiner and a forensic anthropologist testified about the condition Tibbetts' body was in when she was found in an Iowa cornfield in August 2018.

Judge Joel Yates then denied a motion from the defense to acquit Bahena Rivera of the murder charge.

Trent Vileta, the lead investigator in the case and an agent with the Iowa Division of Criminal Investigation, testified Monday that only Bahena Rivera gave law enforcement the amount of information warranting an arrest and a murder charge.

Assistant Attorney General Scott Brown: "Any of the other men that you interviewed at all give you that type of information?"

Brown: "One person in this case is that right?"

Brown: "That person is seated to my right Cristhian Rivera. Would you agree?"

The defense named several other people who lived around Brooklyn or were seen in town around the time of Tibbetts' disappearance, asking Vileta why they weren't considered suspects.

Defense attorney Chad Frese: "You didn't find it a bit ironic that this man you'd received two tips on, the body was found a quarter-mile from his house."

Agent Kevin Horan with the FBI told the jury how they used Tibbetts' cell phone data to show her phone moving at a constant pace while running before it picked up speed and turned off once she disappeared.

"There's a pointy end towards the top and a slightly squared-off component on the bottom," Klein said. "This is consistent with a knife."

Dalton Jack is allowed to step down from the witness stand.

The jury is excused for the day.  Court resumes Wednesday at 8:30 a.m.

The State is cross-examining Dalton, talking about his time away working when Mollie disappeared.

Prosecution runs through the day Mollie disappeared, asking Dalton if he had anything to do with her disappearance.  He testifies that he did not.

The court resumes with Dalton Jack on the stand after a 10-minute recess.

For several minutes, Dalton has been refreshing his recollection on a text conversation he had with Mollie regarding another woman.  He previously admitted to having a relationship with the other woman early on when he was dating Mollie.  He was still having conversations with her as of March 2018.

The defense asks Dalton about a previous relationship with another woman while he was dating Mollie.

The prosecution is objecting frequently to the way defense is phrasing questions, citing instances of "speculation."

The defense is unveiling Dalton's phone records, which show that after she disappeared he only tried to call Mollie one time.

Dalton testifies that their relationship was up and down and the couple had discussed breaking up.

Dalton discusses what his future plans with Mollie were. He said he had planned to propose to Mollie at his brother's wedding.

He says he had bought an engagement ring for Mollie that he was keeping at his house.  He testified that he "spilled the beans" and told Mollie about his plans to propose to her.

Dalton Jack says Mollie was about 5'2", 130lbs. Small framed, but spunky. Would have fought back if she was attacked. But says she was also the type of person who would be kind if she was approached unless provoked. @wqad #MollieTibbetts pic.twitter.com/MnXQjVocxR

The defense asks Dalton if he can think of anyone who would want to harm her.  He says no.

The defense is asking how Mollie treated strangers, saying she would likely be willing to have a conversation with someone she didn't know.

He testifies they had been dating or three years before her disappearance, but they've known each other since elementary school.

Dalton Jack, Mollie Tibbetts' boyfriend is re-called to the witness stand by the defense.

Mollie's boyfriend Dalton Jack is called back. He was questioned already on Day 1 of the trial. The defense has brought up his name a number of times, suggesting police should have looked closer at him as a suspect. @wqad #MollieTibbetts

The defense reiterates that it's not clear whose prints were found in the trunk.

The State is questioning Anna Young. Asking if she attempted to get identifiable fingerprints off of Mollie Tibbetts' body. She was not able to get the fingerprints from the body.

Young was provided with 14 items from the trunk of Cristhian Bahena Rivera's black Chevy Malibu for analysis.  Of the 14, she found latent prints on two items: a red ice scraper and a clear plastic box with fishing hooks inside.

Young says she identified prints that did not match Bahena Rivera. @wqad #MollieTibbetts

Court resumes with defense calling its next witness, Anna Young, who works for the Iowa DCI crime lab with a specialty in fingerprinting.

Trial continuing with Anna Young on the stand for the defense. Works for Iowa DCI crime lab with a specialty in fingerprinting. @wqad #MollieTibbetts pic.twitter.com/m2OvySZHom

"From what I recall, I remember he was pretty racist," she says of Jack.

After brief cross-examination, Iris finishes her time on the stand.

Court is in lunch recess until 1 p.m.

Iris says they broke up, but continued to co-parent. He gave her financial support, was also sending money to his parents in Mexico.

Photo showed in court of Iris, Cristhian and their daughter at a birthday party. They were broken up at this time. Says he was a good, responsible father. @wqad #MollieTibbetts pic.twitter.com/IFDWyhzTKE

Iris Monarrez Gamboa is sworn in as the defense's next witness. She lives in Cedar Rapids and is the mother of Bahena Rivera's son.

Next up is Iris Monarrez Gamboa. Says she met Cristhian Bahena Rivera at a sweet 16 party (Quinceanera) Started dating and had a daugther together. @wqad #MollieTibbetts

Cervantes testifies she knew Bahena Rivera as a kind person, not angry. She finishes her time on the stand.

Cervantes says the family decided to leave the sheriff's office because it was so late, and they gave up thinking they wouldn't get any information about what was going on.

Cervantes says she went to the sheriff's office with family when they heard Bahena Rivera was being questioned. Waited about five hours, until 1:30 a.m.

Cervantes says she is close to Bahena Rivera, says they used to speak weekly. Says he worked all week, every day. Describes him as very funny when he's around family, but shy and quiet among those he doesn't know.

Defense calls Alejandra Cervantes. She is testifying with the help of a translator. CBR is her husband's nephew. She has served as a spokesperson for his family also, because she does speak a little English. @wqad #MollieTibbetts

She came to the US by legal means in 2003 and moved to the Marshalltown area. Says family needed to come up with money to get Bahena Rivera here. Doesn't recall how much. @wqad #MollieTibbetts pic.twitter.com/UMW2oqd4CT

Spence's testimony is finished. Court is going on break for 10 minutes.

Dr. Spence doesn't dispute that Mollie's blood was on the trunk seal and in some cuttings on the fabric liner. Brown: "So Mollie Tibbetts' blood is inside the trunk?" Spence: "Apparently yes."

Prosecutor Scott Brown: "The DNA connects an injured Mollie Tibbetts to the trunk of the black Malibu? Is that correct?"

Dr. Spence agrees the blood stain on trunk seal of Bahena's car was a match to the known DNA of Mollie Tibbetts, the single source.

Defense ends its questioning of Spence.

Prosecution up for cross-examination, confirming Spence does not have his own lab or conduct his own testing.

"I think you would probably expect the same result," Spence testifies about if he took the two DNA sample comparisons were tested again. "But you can never be sure what the key is."

Spence says he has interpretation issues with the evidence presented by the prosecution that Mollie's blood was found on the trunk liner. He says there was another female source that was not Mollie. @wqad #MollieTibbetts pic.twitter.com/klThouEPJP

There were "mixtures" of DNA samples in this case, Spence testifies. Some of those can be weak or inconclusive, other times they can be considered conclusive.

"Just based on what the typical protocols are for doing all the steps ... I didn't see any major issues with handling or possible risks of contamination or protocols that were in place that weren't followed," Spence testifies.

Spence says he didn't identify any problems with the handling of the evidence, contamination etc. But he says there are interpretation issues with what the DNA evidence shows. @wqad #MollieTibbetts

Spence has worked as a forensic scientist for over 15 years, and is often called upon for second opinions in criminal cases.

"What I'm doing is looking at so many cases out of so many labs in so many states, not only just looking at the reports and the supporting documents and all the police reports, but I do look at their standard operating procedures and the various labs," he testifies.

Defense calls its first witness to the stand, forensics expert Dr. Michael Spence. He testifies he has worked over 1,100 DNA cases.

He formerly worked with the Indiana State Police.

"What we ask you to do is listen to our case fairly, to pay attention and to remember that each one of you have the power to say no," Jennifer Frese concludes. 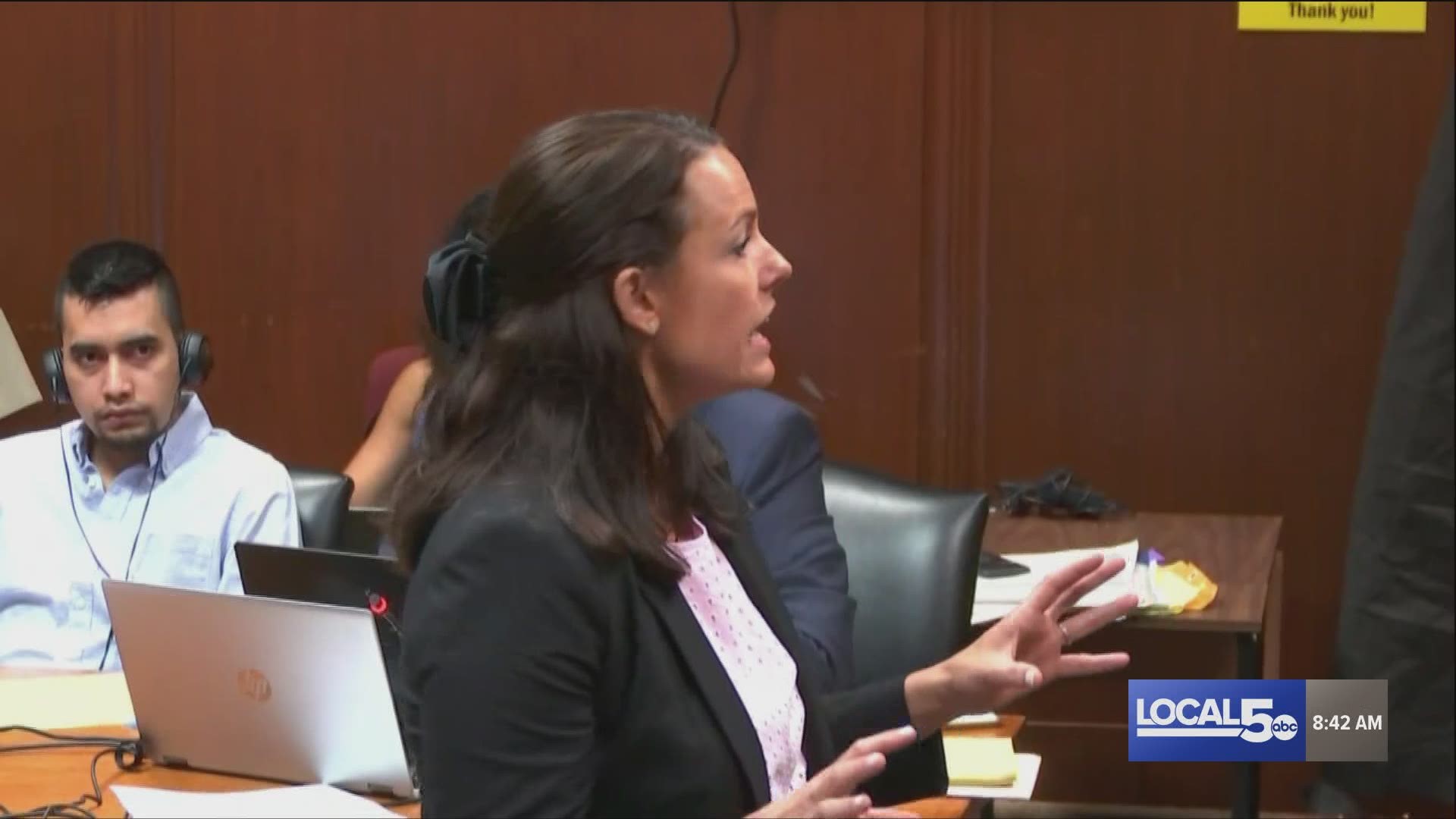 Frese says there is no debate that after a long day at work, Bahena Rivera was brought to his 11-hour interview with law enforcement.

She says Bahena Rivera is a "yes man", always agreeing to do things at work.

Frese: "What the evidence will show is a systematic confrontation with my client.... It was put in my client's head that 'perhaps you blacked out'... They got what they wanted and they closed the case." @wqad #MollieTibbetts

"What you will see in this case is there's no dispute on the fact my client worked 12 hours at a dairy farm and then at the end of his day he was brought to the sheriffs office." Describes her client as someone who does what he's told and cooperated. @wqad #MollieTibbetts

Court is back in session, with Jennifer Frese giving the defense's opening statement.

"This case is about a man who immigrated here from Mexico. You will hear about Cristhian's family circumstances, and the reasons he decided to come into this country."