Lawyers have started whittling down a 175-person pool to 12 jurors and 3 alternates for the trial of the man charged in the fatal 2018 stabbing of Mollie Tibbetts. 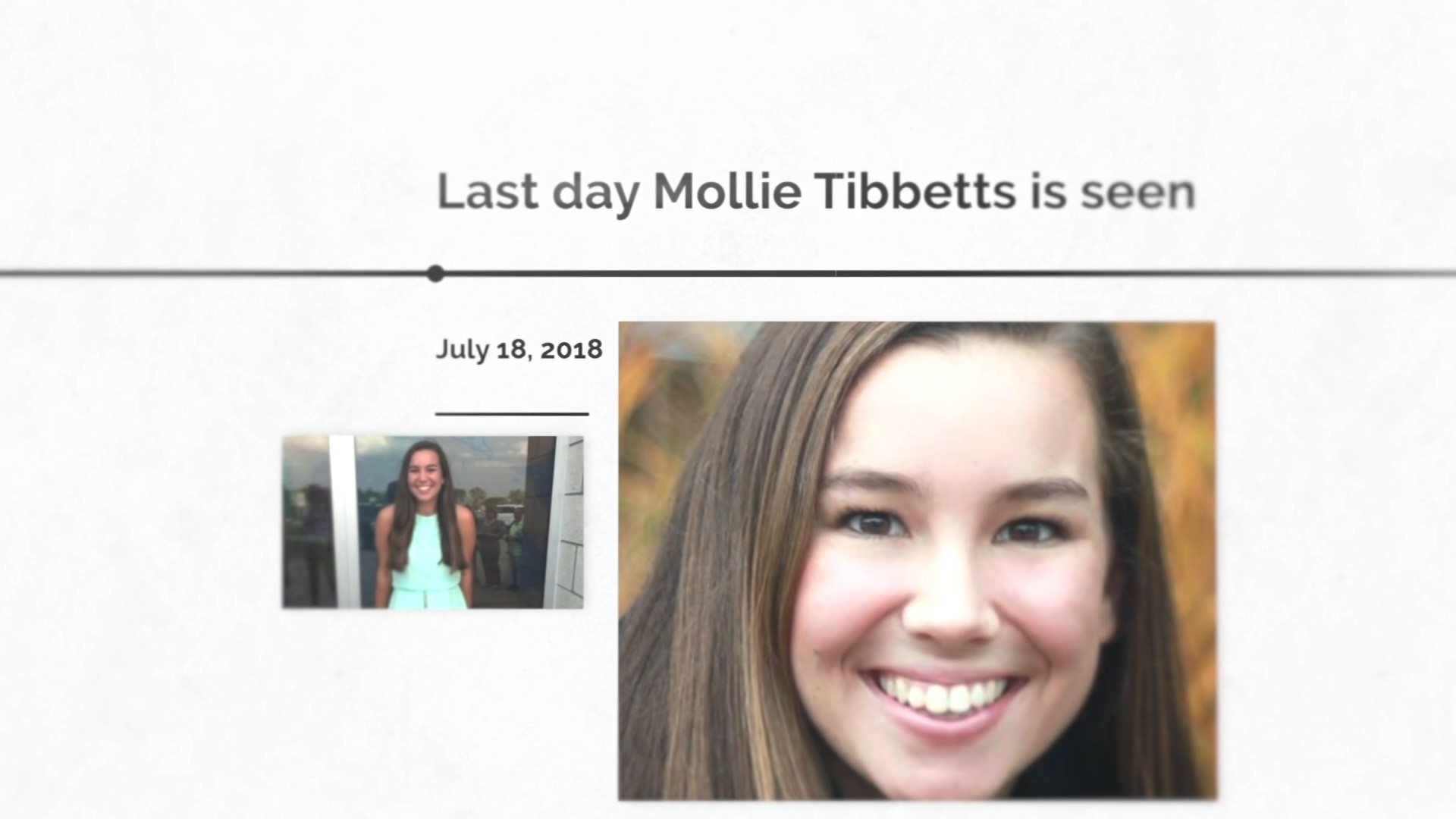 DAVENPORT, Iowa — A prosecutor warned prospective jurors Monday that the trial of a Mexican national charged in the 2018 fatal stabbing of a University of Iowa student will include graphic evidence that will be emotionally difficult to see and hear.

Prosecutor Scott Brown said the first-degree murder trial of Cristhian Bahena Rivera will feature photos and testimony about the stab wounds 20-year-old Mollie Tibbetts suffered after going for a run.

“We’re going to talk about the violent death of a young girl, Mollie Tibbetts,” said Brown, an assistant Iowa attorney general, said during jury selection at an events center in Davenport, where lawyers began working to whittle down a 183-person pool to 12 jurors and three alternates. “It’s not going to be pleasant.”

Legal experts say ensuring a fair trial for Rivera, a farm laborer who is suspected of entering the country illegally as a teenager, will be difficult. Rivera’s arrest inflamed anger over illegal immigration, with then- President Donald Trump calling Rivera a killer who exploited lax immigration laws and Iowa’s governor calling him a predator. The case deepened anxieties about random violence against women, since Tibbetts was attacked while out for exercise in her small town of Brooklyn, Iowa.

Credit: AP
In this September 2016 photo provided by Kim Calderwood, Mollie Tibbetts poses for a picture during homecoming festivities at BGM High School in her hometown of Brooklyn, Iowa.

Jury selection will continue Tuesday before a two-week trial at the Scott County Courthouse.

Rivera, 26, has been jailed since his August 2018 arrest. He wore a dress shirt and slacks Monday and listened through headphones as an interpreter translated the proceedings into Spanish. He’s likely to face a predominantly white jury in a state that Trump carried in 2020.

Defense lawyer Chad Frese told prospective jurors that his client's immigration status had become an unfortunate “flashpoint” but said it had nothing to do with the trial. He said Rivera enjoys the same constitutional rights as a U.S. citizen, and that jurors cannot hold his lack of English language skills against him.

The vast majority of about 30 potential jurors questioned Monday said they had heard about the case, and a dozen said they'd formed opinions about it. At least six were excused after being questioned in private about their views.

One prospective female juror said she felt sympathy for Rivera because he's accused of a horrible crime, and for the family of Tibbetts, who she said was “so viciously murdered.”

“I think whoever did this should definitely pay,” the woman said, adding that her view would “not at all” prevent her from serving.

Tibbetts's disappearance in July 2018 triggered a massive search that featured hundreds of law enforcement officials and volunteers and drew extensive media coverage to her hometown of 1,700. Detectives say they zeroed in on Rivera a month later after obtaining surveillance video showing a Chevy Malibu appearing to circle Tibbetts as she ran, and a deputy later spotted him in town driving that vehicle.

Rivera initially denied involvement but federal agents put an immigration detainer on him during a lengthy interrogation after finding blood in the Malibu's trunk. Hours later, investigators say he confessed to approaching Tibbetts, killing her in a panic after she threatened to call police and hiding her body in a cornfield. He allegedly led police to the body, which had been buried underneath leaves.

An autopsy found that she died of sharp force injuries due to stabbing, although investigators have not recovered a murder weapon. Police say that DNA testing on blood found in the trunk of the vehicle showed it was a match for Tibbetts.

Rivera, the father of a young daughter, had no prior criminal history. Frese suggested Monday he will argue his client gave a false confession after hours of questioning, and will cast suspicion on others for the death.

The trial was moved to Scott County — 100 miles (160 kilometers) east of Brooklyn — after defense lawyers noted that local residents had “very strong opinions” about Rivera’s guilt and Mexican nationality, and that they were nearly all white. Scott County’s population is diverse by Iowa standards but is still roughly 80% white and 7% Hispanic or Latino.

Trump seized on Rivera’s arrest to argue for strengthening the nation’s immigration laws, calling him an “illegal alien” who killed “an incredible, beautiful young woman.” Gov. Kim Reynolds expressed anger that “a broken immigration system allowed a predator like this to live in our community.”

The anti-immigrant backlash was swift. The Republican family who employed and housed Rivera under an alias reported getting death threats. Robocalls linked to a white supremacist group blanketed Iowa calling for mass deportations. Immigrants, even many in the country legally, said they were afraid.

The anger cooled after Tibbetts’ family members demanded that politicians stop using her killing to promote a racist agenda she would have opposed, and said immigrants should be treated as neighbors, not scapegoats.

“My clients tell me that her family’s speeches saved lives, that they might have prevented violent reprisals,” said Bram Elias, who directs an immigration practice at the University of Iowa law school. “In some ways it’s a sign of how effective they were that today we are thinking about how he can get a fair trial.”