Tibbetts' mother, Laura Calderwood, wrote a victim impact statement that was read in court by a representative ahead of Bahena Rivera's sentence being handed down. 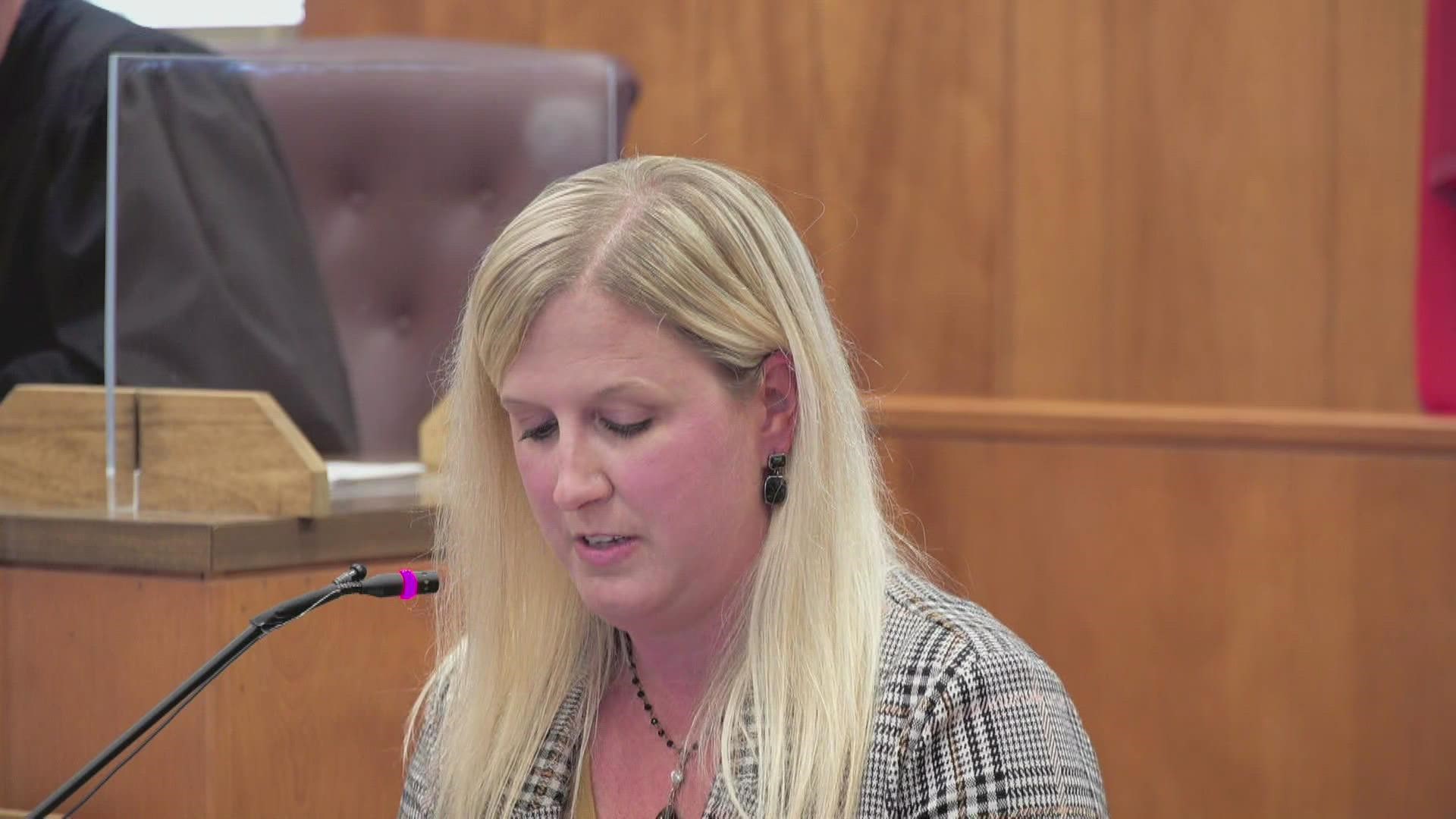 MONTEZUMA, Iowa — Cristhian Bahena Rivera was sentenced to life in prison without the possibility of parole Monday for the murder of 20-year-old University of Iowa student Mollie Tibbetts.

Tibbetts' mother, Laura Calderwood wrote a victim impact statement that was read in court by a representative ahead of Bahena Rivera's sentence being handed down.

Bahena Rivera is not eligible for parole, and was ordered to pay $150,000 in restitution to Tibbetts' estate.

Read the full statement below

Mr. Rivera, I come here today not because I feel the need to address you. However, I come here to give a voice to our daughter, granddaughter, sister, girlfriend, niece, cousin and friend Mollie Cecilia Tibbetts.

Mollie was a young woman who simply wanted to go for a quiet run on the evening of July 18 [2018] and you chose to violently and sadistically end that life.

I want to address the chain of events you set off on the morning of August 18 after you led authorities to Mollie's remains in a cornfield.

Do you know what it's like Mr. Rivera to be woken up by your youngest son Scott, telling you the sheriff needs to talk to us?

Scott and I stood at the entrance of our home where Sheriff Tom Kriegel and [Deputy] Matt Maschmann stood with tears in their eyes. It took them a minute to find the words to say, "We hoped for a different result. However, we found Mollie's remains today."

I thanked them for their service and they left because there was still a lot of work to be done.

I led Scott, whose eyes were burning with tears, to the living room and sat him down on the couch.

"Scott," I said, "I am so sorry. I'm going to call Aunt Billie over to the house to be with you because Mom has a lot of work to do."

Next, I needed to tell my son Jake.

Jake was in his apartment in Iowa City and I did not want him to hear that his sister was not coming home on the news. Knowing my sister Kim was headed to Iowa City for work, I called her and said, "Kim, they found Mollie's remains this morning, and I need you to pick Jake up and bring him home."

Imagine what it's like to call Mollie's father Rob, who resides in Fresno, California, and say, "Rob, I am so sorry to have to tell you this, but they found Mollie's remains this morning, and I need you to come back to Iowa."

Can you imagine Mr. Rivera, as a father, having Paulina's mother taken away from you and to have to tell your daughter that she will never come home?

However, the most difficult person to tell was Mollie's grandmother and my mother, Judy Calderwood.

Judy truly believed her granddaughter would be found alive, because who could harm such a beautiful, vibrant, young woman so full of life, and promise? Who could harm Judy's precious grandmother, let alone brutally murder her and dump her body in a cornfield?

This was heartbreaking news that needed to be delivered in person.

I entered my mother's home and she greeted me with a big smile and asked if I wanted a cup of coffee. There certainly was no easy way to tell her the news, however, it had to be done before her phone started ringing with loved ones sending their condolences.

I very quietly and softly said, "Mom, I have some bad news. They found Mollie's body this morning, but we know where she is now."

Judy Calderwood's unwavering faith had been brutally shattered by your senseless act of violence.

Can you imagine Mr. Rivera, sitting across the table from your madre, and telling her Paulina is never coming home?

I am aware that you know Ulysses Felix Sandoval and his family. Uly, as I call him, was a classmate and a friend of my son, Scott. Do you know Uly was at the press conference where authorities announced that you, Cristhian Bahena Rivera, had been charged with the murder of Mollie Tibbetts?

Credit: AP
Laura Calderwood, mother of Mollie Tibbetts, right, is comforted as her victim impact statement is read during a sentencing hearing for Cristhian Bahena Rivera, Monday, Aug. 30, 2021, at the Poweshiek County Courthouse in Montezuma, Iowa. Rivera was sentenced to life in prison for the stabbing death of college student Mollie Tibbetts, who was abducted as she was out for a run near her small eastern Iowa hometown in July of 2018. (AP Photo/Charlie Neibergall, pool)

Uly immediately started crying, but knew that he needed to call his madre before she heard it on the news.

The Felix Sandoval family was devastated. How could this young man they fed and fostered be responsible for such a heinous crime? Do you know, Mr. Rivera, that Uly's parents had to leave Brooklyn because they were receiving death threats? Do you know Uly lived in our home for his last year of high school so he could finish the senior year and play sports?

I do hope one day Paulina has the opportunity to become a mother, but how will she ever explain to her children who their grandfather is?

This is a legacy you left behind or your only child, Mr. Rivera. I don't know whose situation is worse.

WATCH: Full coverage of the trial of Cristhian Bahena Rivera