No Love, No Tacos: Marshalltown sign spreading a nationwide message of unity

Turning a bad situation into a great opportunity. 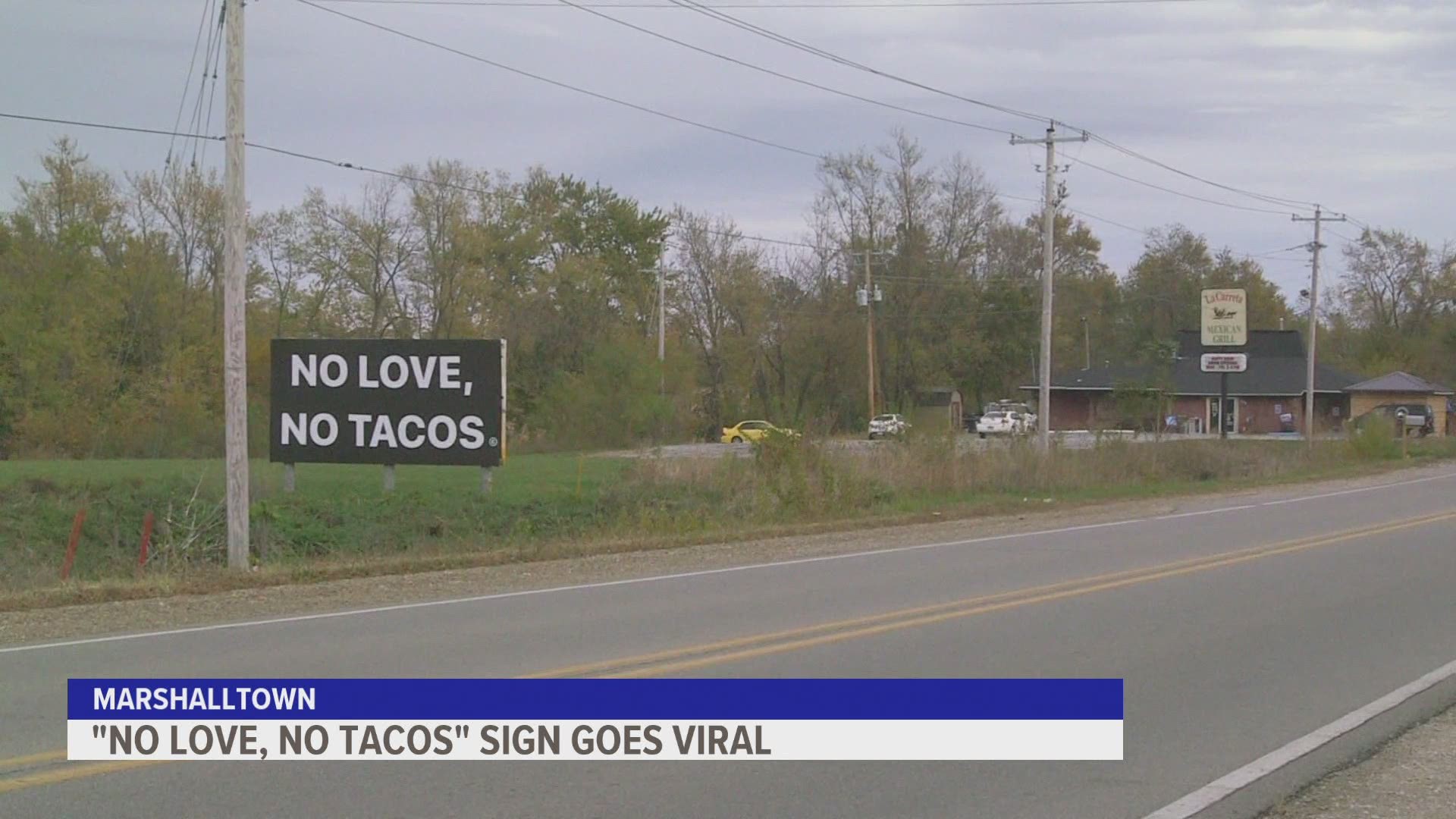 MARSHALLTOWN, Iowa — No love, no tacos.

The phrase might make you chuckle, and it's plastered on a big billboard in Marshalltown that's now gaining national attention.

But the story behind it started out a little rocky.

Phrases included, "Love is love," and "no human is illegal."

It's a sign that caused Alfonso Medina a lot of trouble.

"It was just advocating for basic human rights and equality," Medina said.

That's not the way some people saw it. After putting it up, he got a few letters.

One letter accused Medina of turning 'Marxist', saying the sign was 'offensive' to 'family values' and 'America.'

Though the author promised to never patronize the restaurant again, Alfonso didn't regret it.

"It was my decision to put it up on my business practicing my freedom of speech," Medina said.

"It just exploded from there," Medina said.

The signature then became a sign that soon attracted national attention and customers from all over.

"If they're in Marshalltown and they have that amazing message of supporting everybody, I definitely want to support them," Linsey Read from South Carolina said. "And I heard the food is amazing!"

Many customers came for the love and stayed for the food.

"Why not be out here and help support him and try and eat a massive three-pound burrito, which I've now mostly destroyed," said Al Womble, chair of the Iowa Black Democratic Caucus.

Alfonso has now made a website, nolovenotacos.org. On the site, people can make a pledge and a plan to vote. They can also advocate for Election Day to become a national holiday.

"[The site is in] English and Spanish, and it's also for people pledging not to work that day, or to help out at the polls or commit to take at least one person to vote," said Medina.

Movement | NoLoveNoTacos
Join the movement! No Love, No Tacos was created to promote fairness, equality, respect and dignity for all as well as encourage people to get out and vote. We are doing our part in hopes to make the 2020 election a fair one.

RELATED: Report: Iowa derecho most expensive 'severe storm' on record in the US