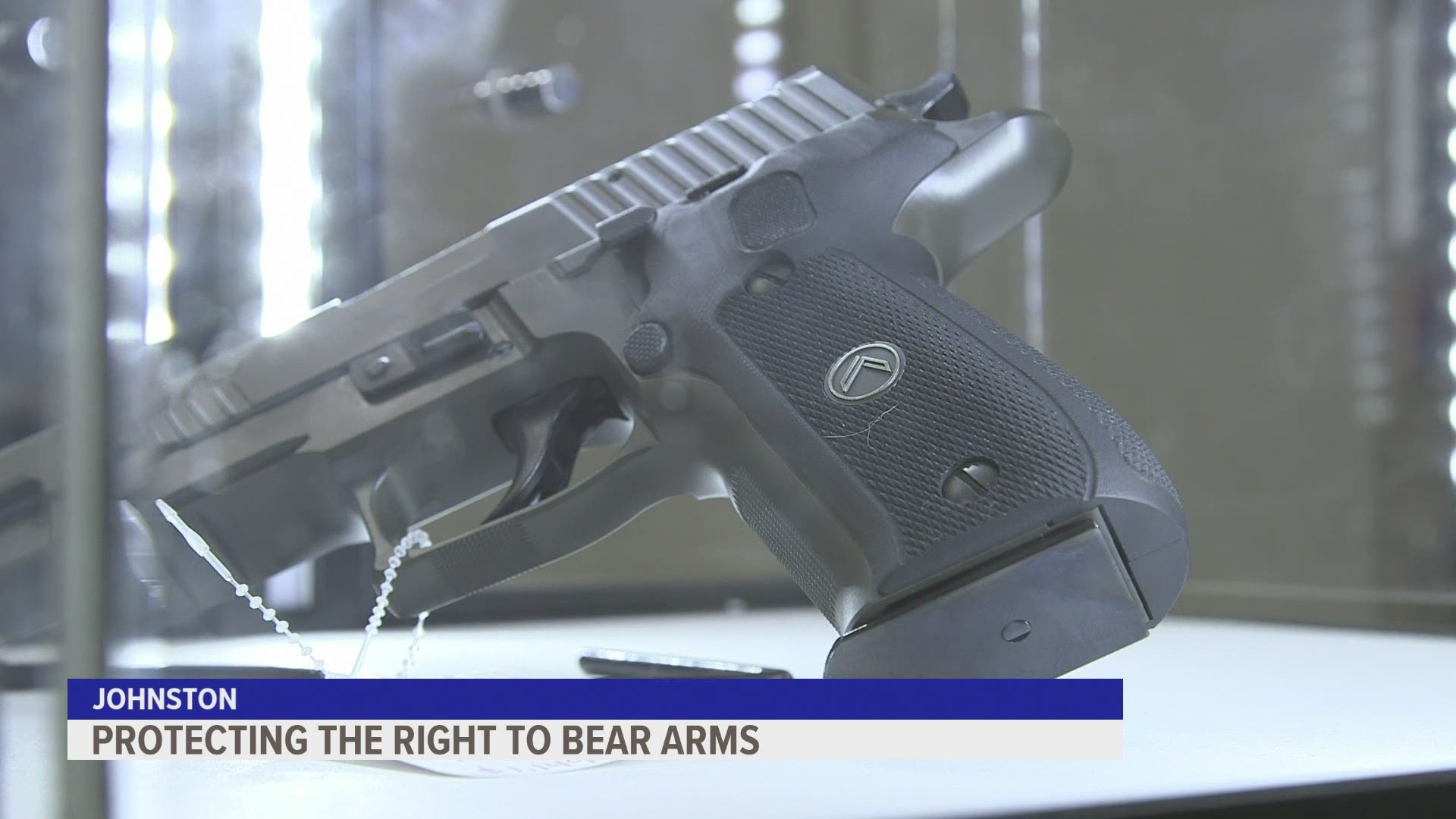 JOHNSTON, Iowa — At CrossRoads Shooting Sports in Johnston, Ethan Settle takes pride in educating people on how to safely use firearms.

"My absolute favorite customer to deal with is that first-time gun owner," Settle said. "And we can talk them through the process of owning that."

"We try to take a whole approach to firearms ownership, so you do it responsibly, safely, have fun, but know what your rights and your political duties constitutionally are," Settle said.

Nowadays, the conversations behind the counter at CrossRoads have included the topic of several Iowa counties' move to become 2nd Amendment Sanctuaries.

Recently, both Jasper and Hardin counties signed resolutions to oppose "any legislation that would infringe upon the constitutional right of the people...to keep and bear arms."

That means county employees cannot enforce state or federal laws infringing on a person's Second Amendment rights, but it only applies to future laws--not existing ones.

As several other counties, including Madison, look to sign similar resolutions, Settle applauds Iowans who have spoken directly to their counties' boards of supervisors to advocate for them.

"The issue of sanctuary counties has been around for a number of years now and it’s really picked up speed since the November election, and just a lot about people being engaged with their local county governments," Settle said. "What I think is cool about it, is it’s people getting out, voicing their concerns with their local county governments."

The Iowa Firearms Coalition provides templates for Iowa counties to draft resolutions protecting the Second Amendment. Chair Michael Ware says the nonprofit aims to be a resource to educate Iowans on the issue.

"We say, here’s the template, here’s some working language, these are some [recommendations and] best practices," Ware said. "They're saying, listen. This civil right, we care about. And we know that it’s one that gets curtailed, chipped away at, and discussed a lot."

A spokesperson for the ACLU of Iowa said it was not clear from the facts available on how the sanctuary status could be interpreted as a civil rights issue.

Moms Demand Action, a group that works to end gun violence, also weighed in on the matter. In an email, they sent the following statement:

“Local politicians don’t get to pick and choose which laws to enforce. These resolutions are largely symbolic and won’t directly interfere with the enforcement of critical gun safety laws — it’s clear that they are nothing more than a political game by local politicians to signal their support for the gun lobby,” said Traci Kennedy, Chapter Leader of the Iowa chapter of Moms Demand Action. “Instead of passing confusing resolutions, our leaders should focus on solutions that will help keep our families safe and pass laws and resolutions that acknowledge and address the crisis of gun violence in our state.”

The Madison County Board of Supervisors will discuss a similar resolution at their meeting July 27.