Des Moines police said three people were arrested in connection to a protest at the Hy-Vee on SE 14th and Park last month. 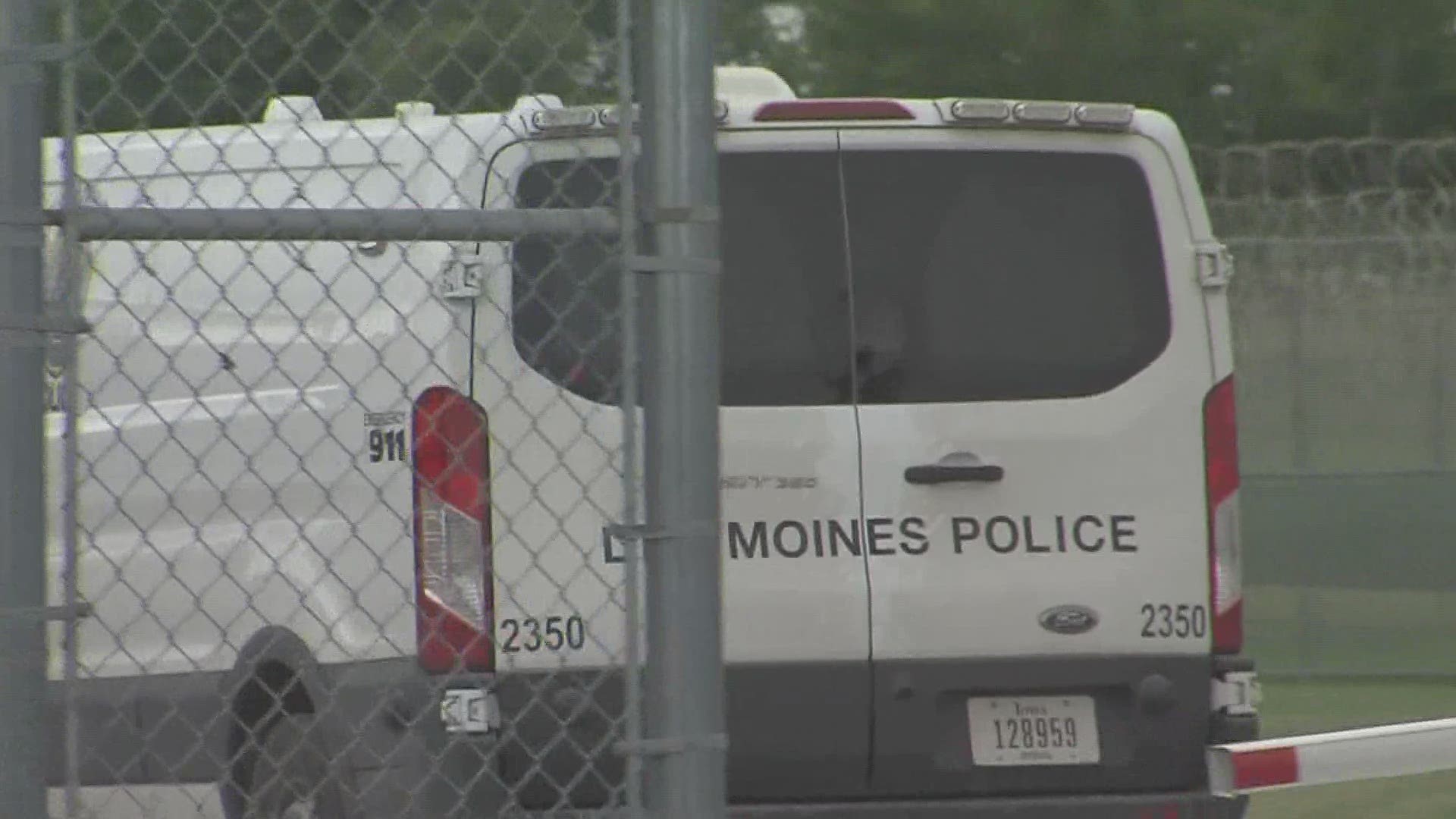 Two of those, Viet Tran and Alexandria Dea, are charged with Unauthorized Dissemination of Intelligence Data, among others. Officers said Dea took an officer's radio and threw it out of his reach. Police said she reached into an officer's pocket and removed a document with intelligence data.

They say the document was protected under Iowa law from unauthorized distribution, and aired in a newscast.

Police said Tran was later shown dispalying the intelligence data in a newscast.

Credit: WOI-TV
Protesters say law enforcement officials were carrying around these packets with pictures of people who they say vandalized a car at a Hy-Vee protest weeks earlier.

"They printed these photos of people's faces out, they had them in folders and binders, and they passed them out to the State Patrol," said Jaylen Cavil, an organizer with Des Moines BLM. "So they began to start arresting people as they got to the Capitol."

Wednesday at the Capitol, officers said as they tried to escort someone, several people began to assault the officers. A release said the police officers were "pushed, pulled, hit and jumped on," and that at least 15 adults and two juveniles were arrested.

"At one point, a protester assaulted a police officer by jumping on his back, placing him in a chokehold, and wrestling him to the ground," a department release said. "As they struggled on the ground, the officer was disarmed of his duty handgun. The officer was able to recover the handgun. This protester was arrested."

Today, multiple police officers were assaulted at the State Capitol while arresting persons wanted in connection with the vandalism at Hy Vee on 20 June 20. Efforts to encourage these offenders to turn themselves in were declined, and today they were taken into custody when they were seen at a Black Lives Matter protest event. These arrests went without incident. As officers escorted an arrestee out of the building, they were swarmed and assaulted. The attached video is only seconds after the arrestee was led out of the Capitol. Protestors have said that they were pushed out of the Capitol. They followed, surrounded, and assaulted the arresting officers. In this video you’ll see an officer being attacked from behind, placed in a chokehold, and wrestled to the ground. During this assault the officer was disarmed of his duty handgun. Towards the end of the video, you will see the officer gain control of the arrestee and his handgun, fortunately successfully re-holstering it. Eventually, order was restored but not before at least 15 more arrests had to be made. Central Iowa law enforcement has been supportive of peaceful protests, and professional and tolerant with non-violent protests that illegally block roadways for hours and disrupt neighborhoods. We have exercised restraint and discretion during times of criminal damage to property. Arrests are not an attempt to halt progress or punish any person that is critical of our department. Arrests in connection with the vandalism at Hy Vee and other local businesses address the real cost of the damage; the financial and emotional impact on the owners, consumers, and in some cases, the taxpayer. Throughout these events, officers have been assaulted with rocks, bricks, and bottles of water/urine. These attacks end today. Violence against anyone, including police officers, will result in arrest. Our Des Moines Police Department has continued, daily, to engage in discussions and work with community leaders and activists focused on partnering together to improve the quality of life for all citizens in Des Moines. This will continue. Together we have the strength to be the change.

However, protesters said that's not the way it played out.

Kate Swanson, from Adel, arrived at the protest just five minutes after the event's 1:00 p.m. start.

"As I approached the Capitol, I heard yelling and I saw someone walking away from the building crying," Swanson said. "As soon as people got through the door of the Capitol, they just started grabbing people and arresting people. They said it was people who were at the Hy-Vee protest, but it turns out they were just grabbing people, it didn't matter if they were [at the Hy-Vee protest] or not."

Among those arrested was BLM activist Matthew Bruce, who had previously turned himself in following the incident at Hy-Vee.

Arrests being made at Capitol

Cavil said he believes law enforcement made a concerted effort to charge protesters with felonies as they were protesting at the Capitol for people with prior felony convictions to have their voting rights restored.

"People were in the Capitol today because we were trying to put pressure on the Governor to sign an executive order that would reinstate the voting rights of people who have been convicted of a felony," Cavil said. "What is the response we get? [Several] of us are charged with a felony. So tell me if those two things are connected...I personally think they are."

Stay with Local 5 on this developing story.

RELATED: Protester claims he was hit intentionally by governor's vehicle

RELATED: Des Moines Police Department conducting investigation into use of force during protests